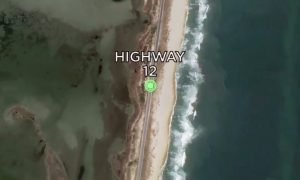 Outer Banks, North Carolina: One Road In, One Road Out (Video)
0 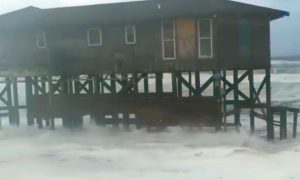 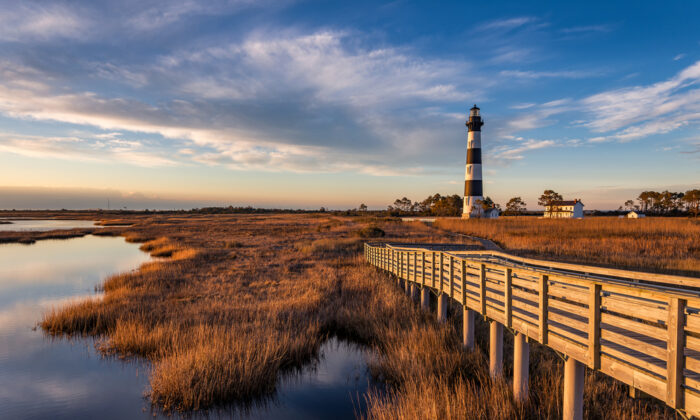 The Outer Banks: North Carolina’s Playground by the Sea

Visitors have been exclaiming about the area where northeastern North Carolina meets the Atlantic Ocean for a very long time. In fact, what we today call the Outer Banks received its first known rave reviews more than 400 years ago, in 1584.

That’s when Sir Walter Raleigh sent two explorers to check out the sounds and estuaries alongside what is today North Carolina’s playground by the sea. The reports they brought back to England about the wonders of the New World caused Queen Elizabeth I to commission Raleigh to establish in this area in 1587 the first English settlement in America, two decades before Jamestown and three decades before Plymouth.

It was a disaster which to this day remains a mystery. Every one of the roughly 120 men, women, and children whom Raleigh sent—he himself never set foot in North America—vanished without a trace. Their deserted settlement site showed no signs of any trouble. Conflicting theories about what had happened still abound.

Nowadays one of the many interesting and fun things to do during a visit to North Carolina’s Outer Banks area is to take in a well-done stage production about this four centuries-old unsolved mystery of the disappearance of that first English settlement in the New World. Written by Pulitzer Prize-winning playwright Paul Green, “The Lost Colony,” America’s first and longest-running historical drama performed under the stars, has drawn large crowds and high praise for the past 60 years.

This may well have been an unlucky place for those Englishmen who attempted establishing a colony here, but nowadays most of the visitors who come here each year probably consider themselves lucky to have discovered such a splendid vacation spot.

What we call the Outer Banks is a string of sandy barrier islands that stretch for more than 130 miles along the Atlantic coastline of North Carolina. Barrier islands—generally long and of low elevation with beaches on the ocean-facing side and sand dunes and/or tidal flats or marshes on the mainland-facing side—are thus called because they serve as a sort of protective barrier between the ocean and the mainland they parallel. Tidal inlets are usually interspersed among them.

It’s an area of great natural beauty with mile after mile of pristine white sandy beaches and shifting sand dunes, inlet water hideaways, and wildlife refuge areas, all of which make for great recreational opportunities. The water frontage surrounding the Outer Banks exceeds 900 miles. Its estuary system—a mixing place of seawater and fresh water—is the largest in the world.

In Nags Head, at 400-acre Jockey’s Ridge State Park, site of the highest natural sand dune on the Atlantic coast, visitors can go hang gliding and sandboarding, fly kites, hike through nature trails, and picnic in an area that in some places looks like a big desert.

It was precisely this combination of tall dunes, good winds, and soft sand that led two Dayton, Ohio, bicycle shop owners, the Wright brothers, Wilbur and Orville, to come here to try out their invention. They selected for their most important experiments a spot just south of Kitty Hawk called Big Kill Devil Hill, from which they made more than a thousand glides.

Here, on Dec. 17, 1903, the two, each dressed in suit and tie, flipped a coin, shook hands over the noise of the engine they had built, and with younger brother Orville at the controls and Wilbur running alongside, their machine lifted off the ground at 10:35 in the morning and for the first time, a heavier-than-air machine with a person onboard rose into the air on its own power. That first flight lasted only 12 seconds and traveled only 120 feet, not much more than half the length of a Boeing 747. But that day on the Outer Banks the two brothers made history and mankind made one of its greatest advances. You can learn all about it at the place where it occurred, now the site of the Wright Brothers National Memorial.

Close by this historic spot you can easily find a nice beach. There are 85 public access beaches in this area and they are among the best on the Atlantic coast. Relax on a beach, take a dip in the ocean, walk on the soft sand, search for shells or go surfing, windsurfing, or surf fishing—this is one of the best areas along the entire east coast for any of these activities. It’s also a great area for other outdoor activities such as golf, kayaking, canoeing, and camping.

Fishing, both saltwater and freshwater, is truly outstanding and you can fish from along the ocean shore, from piers, in the many sounds, and aboard offshore charter boats.

This is also one of the best places in the country for birdwatching, home of the 5,834-acre Pea Island National Wildlife Refuge, great during the warm months but even better during the cold season when more than 400 species of waterfowl winter here. You can go on either guided or independent nature trail tours and even sit in a blind to observe birds up close.

Along the coast you will see some of America’s best-known lighthouses, including Cape Hatteras Lighthouse, the tallest one in America and a symbol of North Carolina.

At least 1,500 known shipwrecks lie off the coast, a delight for divers. A few shipwrecks are visible from shore at low tide. It was founding father Alexander Hamilton who dubbed the area offshore “The Graveyard of the Atlantic.”  There’s a museum by that name that you can visit as well as other maritime-related sites, including Chicamacomico on Pea Island, where you can learn about the U.S. Life Saving Service, forerunner of the U.S. Coast Guard, and the North Carolina Maritime Museum in the town of Manteo.

Manteo on Roanoke Island (pop. 6,000) is sort of the main gathering point of the Outer Banks. It’s a pleasant place with nice shops and good restaurants. Close to town are such attractions as a newly expanded aquarium that focuses on Outer Banks waters and Fort Raleigh National Historic Site, a re-creation of the fort that the first settlers built here, which includes a classic English garden called Elizabethan Gardens, and stands adjacent to the amphitheater where “The Lost Colony” performances take place.

You can stroll from “downtown” Manteo across a bridge to Roanoke Island Festival Park, a living history museum with an interactive museum and a film theater.  Visitors can climb aboard the Elizabeth II, a sailing ship reflecting the type of vessel on which those first settlers crossed the Atlantic. “Settlers” decked out in the costumes of the late 1500s perform woodworking and blacksmithing chores and show you the sort of accommodations settlers inhabited.

It was at this living history museum that I learned about something that certainly must have amazed and delighted those first Englishmen who settled in the New World here in North Carolina’s Outer Banks area.

The natives, I learned, were very happy to acquire low-value items from the settlers in exchange for something they called a “Roanoke.”  It was their word for a pearl. Probably made the settlers happy they came here.

Of course you won’t be able to trade your unwanted items for pearls, but, like me and most other people, you probably will be very pleased if you come here for a visit.

Best Time to Visit: Any time from spring through summer and into early fall, but late in the season be alert as hurricane season approaches. This is an extremely popular summer destination so it’s wise to plan well ahead to ensure good accommodations.

Travel Guides: “Fodor’s The Carolinas and Georgia” is a good choice for this area of the United States.