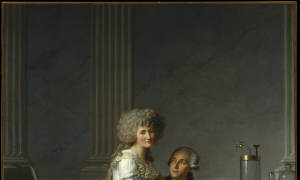 The Opulence of Embroidery

NEW YORK—Perhaps it’s the anticipation of spring blossoms that makes one veer toward that which is ornate and colorful in the man-made. Artists have long tried to capture and interpret nature’s abundance but so have dressmakers, and more precisely, embroiderers. If there is one craft that captures the fragile beauty of nature it must be embroidery.

Whether by chance or by design, there are two rather demure exhibitions currently and simultaneously showing at The Metropolitan Museum of Art. They are in opposite wings, one in the European, the other in the Asian wing of the building, but it’s well worth the trek through the many galleries, stairs, and lost tourists because what awaits is a display of wonders in silk. It is also a good chance to make note of the similarities and differences in the two fascinating approaches of this medium.

The exhibit Painting With Threads, Chinese Tapestry and Embroidery, 12th–19th Century showcases works drawn from the Met’s collection that defy belief when it comes to the sophistication in design and unsurpassed skill in execution.

One work called “Fan With Landscape” looks like watercolor on silk and it is only by reading the label “Silk embroidery on silk gauze” that one begins to comprehend its quiet magnificence. Like many Chinese artworks it depicts distant mountain peaks and pines, symbols of longevity in Chinese culture, but try as you may, it will be impossible to see the threads that achieve such diaphanous effect.

Other works glisten with exquisite textures that stand out in relief.

One work titled “Fairy and Crane” depicts the fairy herself on a mysterious bridge with stylized protrusions while her faithful-looking crane stands in all his glory—his feathers shining with the luster of tiny pearls and coral beads. In the background, an other-worldly pomegranate tree with unusual lustrous bark juts out laden with fruit that is bursting out with coral seed-beads.

The juxtaposition of naturalistic elements with stylized ones results in a graphic effect that came to be copied in Europe.

Just about every plant and rock feature had auspicious meanings and the juxtaposition of naturalistic elements with stylized ones results in a captivating graphic effect that came to be copied in Europe as well as trade between the two continents flourished.

Being at the Met, one need only navigate across to the European wing to the Elaborate Embroidery, Fabrics for Menswear before 1815 exhibition where another small room full of treasures awaits. It is especially easy to see just how influenced French embroiderers were by the Chinese aesthetic. And while French embroidery retained the painterly style of the Qing Dynasty embroidery, when used in fashion design, it was as opulent borders to men’s suits.

Although we might think of these highly ornate gentlemen’s suits as over-the-top, at the time, they were seen as light in both color and texture when compared with the slashing and puffing techniques of Renaissance dress that was augmented with heavy jewelry as well.

Alongside a selection of embroidery samples for fashionable menswear made between about 1760 and 1815, the installation also features lengths of fabric for an unmade man’s suit and waistcoat. These reveal how the fabric was partitioned before being cut so that even the buttons and pocket flap were completed.

Judging by the designs available to fashionable gentlemen in the late 18th and early 19th centuries, the great contrast between menswear and womenswear was not in existence yet. Men would have rivaled women in their ornate outfits and the overcoat was worn open to offer an unobstructed view to an equally ornate waistcoat.

Velvet seems to have been the fabric of choice for the most formal occasions. It was contrasted to dramatic effect with gold, silver, and jeweled buttons but also embroidered with metallic threads.

In one sample a gilded motif of big open flowers is surrounded by knotted chenille in various shades of green while the rest of the fabric is a geometrically textured rich brown velvet. The whole pattern seems to be bursting with decorative elements and it is as a perfect study on how to achieve pattern-on-pattern that teeters on “crazy” yet still manages to retain a sort of majestic opulence.

Seen with modern eyes, it’s hard to adjust to this visual feast. Just as well, it’s in small increments. In essence, the embroidery samples are small and it’s only when one tries to imagine the overall effect of a whole suit that one starts to comprehend the aesthetic explosion of colors and textures.

One more step back—just imagine the effect of the a multitude of courtiers while strolling through the The Hall of Mirrors in Versailles. One’s own ornate reflection as well as that of everyone else would have been amplified to a dizzying effect.

Where do you get that nowadays? Not even Fashion Week can compete with what was simply a part of daily life for French aristocracy.

If you’re game, still your mind, open your eyes and these frayed little fragments will offer you a glimpse at the grandeur of days long past.

Elaborate Embroidery, Fabrics for Menswear Before 1815
Through July 19, 2015