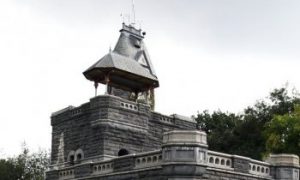 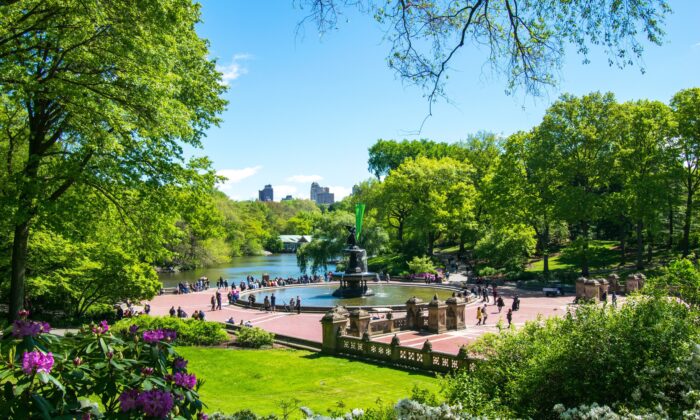 Betheseda Terrace in late spring. In the midst of the COVID pandemic, outdoor spaces like Central Park have become more important than ever, as they provide people with a safe space to unwind and get fresh air. (Courtesy of Central Park Conservancy)
Traditional Culture

The Olmsted Legacy: A Core Belief in the Inherent Goodness of People and Nature

Sunlight filters through the branches of billowing trees. A cloudless cerulean sky and a warm breeze make it a perfect day for an outing. Throughout the park, couples, families, and friends sit in groups of twos and threes, enjoying the last remnants of summer. Amid this peaceful oasis, you can almost forget that you are in the center of America’s biggest metropolis.

“Every day, millions of people wander through Central Park. … They never think about someone going through the process of designing these places,” said Lucy Lawliss, co-chair of the National Association of Olmsted Parks in an interview with Elite Magazine. “We forget that these aren’t just little random pieces of nature that the city left behind.”

The birth of Central Park in the 19th century had a profound impact on the landscape-design industry. Frederick Law Olmsted, one of the primary architects, became known as the father of American landscape design. His remarkable legacy also includes Prospect Park in Brooklyn and Biltmore Estate in Asheville, North Carolina, among hundreds of other projects.

Olmsted’s work was motivated by a commitment to providing visually compelling and accessible green space to people of all economic backgrounds. He believed in the restorative and healing power of nature, as well as its role in promoting a stronger sense of community, especially in urban areas.

His views are especially relevant today as we cope with the COVID pandemic. While indoor gatherings are considered unsafe, people are turning to the outdoors to connect with friends and family members. Places like Central Park provide people with a safe space to unwind and get fresh air.

Central Park was the first urban landscaped park in the United States. The idea for establishing a large green space in New York City was proposed initially in the 1840s. However, construction didn’t begin until 1857, after Olmsted and his co-designer, Calvert Vaux, won the rights to the project through a park-design competition with their proposed Greensward plan. The project spanned nearly two decades and cost $10 million. It wasn’t officially completed until after the Civil War, in 1876.

Nearly all of Central Park was built by hand. The only machine used through the entire process was a rock crusher.

“It’s amazing to me because of how little of our work today is done by our own hands,” Lawliss said. Thousands of men worked for hours every day, grinding rock formations into walkable roads. Central Park was built on land that was especially difficult for construction of any kind. It had been chosen because of its rockiness, which made it unsuitable for commercial buildings.

Transcendentalism was a core concept in the creation of Central Park. Developed in the United States in the 1830s, the philosophy is based on a core belief in the inherent goodness of people and nature. “In this country, nature has been a theme from the very beginning,” Lawliss said.

Olmsted had traveled throughout Europe and spent time studying many European cities. He observed that while they had many well-designed piazzas, historic cathedrals, and beautifully paved streets, their designs consisted mostly of hardscape—there wasn’t much nature.

Olmsted viewed the Central Park project as an opportunity to make nature an essential part of the American experience, even for those living in big cities. “He’s saying that our democracy would be based on setting aside places of nature for everybody—that this is what would make America distinct,” Lawliss explained. After the successful establishment of Central Park, other cities in the United States began deliberately leaving green spaces during their development process, leading to an urban landscape model that would endure for generations.

A Glimpse Into the Future

Landscape artists face the challenge of maintaining a balance between artificial and natural elements. “You don’t have one without the other,” Lawliss said. It’s important to make sure a park doesn’t look overly polished and manufactured, but at the same time ensure that it doesn’t look unkempt. The organic and synthetic elements need to come together in tranquil harmony, thus enhancing your experience of both.

Landscape architecture is also unique in that you often have to wait decades—if not centuries—to see a place the way the designer intended it to look. At the time of the park’s 150th anniversary, many people noted that the park looked closer to Olmsted’s vision than it did when it was first completed. The small saplings planted back in the 1870s had transformed into sturdy, towering oaks.

“As landscape artists work with living materials, we have the ability to see the future in a way that architects and other artists don’t,” Lawliss said. “We have to be willing to wait and say, ‘Yes, I am going to plant that little seed, and someday that seed will be a giant oak tree.’” In an age when technology can make everything instantaneous, and people desire immediate results, landscape design recalls an earlier tradition.

The Beauty of Central Park

Using seemingly endless green lawns, undulating rock formations, and winsome flower fields, Olmsted created a stunning new landscape out of what was previously just rocky terrain. Central Park has many iconic features, such as its transportation network. Various modes of transportation can pass through Central Park unimpeded: Horse-drawn carriages travel gracefully along the roads, special bike paths allow cyclists to travel with ease, while pedestrians can stroll along the park’s many paths.

Central Park’s beauty, as well as its many amenities, could not exist without constant maintenance. Take, for example, Belvedere Castle. The fairy-tale-like landmark built in 1867 had deteriorated over the years. The Central Park Conservancy renovated the structure for the first time in 1983 and turned it into a nature observatory. In 2018, it was closed once again to undergo extensive restoration. The stunning structure has been a beloved playground for generations of New York families, and it stands today in its original majesty.

Though New York City has changed drastically in the last century, Central Park remains a comforting constant. It coexists with the towering skyscrapers, and has established itself as one of the most prominent symbols of the Big Apple. In the midst of the hustle and bustle of the city, Central Park provides a relaxing retreat.

According to Lawliss, visiting Central Park is one of the best ways that outsiders can experience New York City. “I think that is one of the greatest experiences New York has to offer, because it is sort of a crossroads of all kinds of people—tourists and natives, the young and old,” she said. With his original vision, Olmsted seems to have transcended space and time. People from all backgrounds and walks of life gather in the park’s sprawling green space, sharing joy and laughter.

Established in 1980, the National Association for Olmsted Parks (NAOP) is a coalition of design and preservation professionals dedicated to preserving and furthering the Olmsted legacy. On April 26, 2022, NAOP will be holding the Olmsted 200 event to celebrate the bicentennial of the birth of Frederick Olmsted. It will be a coordinated national and local celebration, bringing together supporters and experts from all over the world to explore the many ways in which Olmsted’s values are relevant to 21st century America. For information, see Olmsted.org

This article was written by Cora Wang and translated by Angela Feng is reprinted with permission from Elite Magazine.