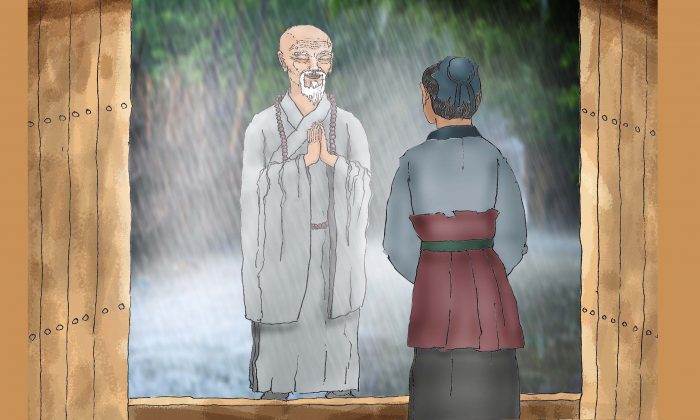 The old monk asked the servant for shelter at the manor. (Illustration by Sun MIngguo/The Epoch TImes)
Chinese Culture

The Old Monk Who Got Drenched

Night was about to fall, and an old monk was on his way home to the temple. All of a sudden, there was rolling thunder, and rain came pouring down from the sky. It was a massive downpour, and there was no sign that the rain would stop anytime soon.

The monk looked around and saw a manor not far ahead. He ran towards it to seek shelter for the night.

The manor was huge. When the servant who answered the door saw that it was a monk, he spoke to the monk in a cold voice. “My master does not have any dealings with monks and priests. Please go elsewhere.”

The monk pleaded with him: “The rain is too heavy, and there isn’t any shop or residence nearby. Please have a heart and put me up for the night.”

The servant said, “I’ll have to check with my master.” He soon came back with a reply. The answer was still no.

The old monk asked if he could take shelter under the eaves. The servant shook his head. The old monk had no choice. After asking for the name of the manor owner, he turned around and ran back to the temple, soaked to the skin.

Three years later, the manor owner took a second wife and doted on her. The second wife wanted to go to the temple to pray for good fortune, and the manor owner went with her. When he reached the temple, he spotted his name written on a tablet on the altar. Puzzled, he checked with a young monk who was cleaning the temple.

The young monk smiled. “The abbot put the tablet there three years ago. One day he came back drenched and said there was no affinity between him and a particular man. He decided to write the man’s name on a tablet and chant sutras every day to transfer merit to the man in the hope of dissolving the feud between them. That’s all we know.”

The manor owner knew instantly that he was the man the monk was talking about. He was very ashamed of himself. From then on, he was a pious man and made donations to the temple on a regular basis.

The monk and the robber

There once was a monk who was diligent in his self-cultivation. Robbery was rife where he lived. One night, the monk dreamt of a deity who said to him: “You will die tomorrow. A robber called Zhu Er riding a white horse had bad blood with you in your previous life. He will kill you, and there is no way you can avert the disaster.”

The monk pleaded with the deity, “Please help me on account that I’ve done many good deeds in this life.”

The deity replied: “I cannot help you. The only person who can help you is yourself.”

Indeed, the next morning a robber came and dragged the monk out of the temple. He threatened to kill the monk unless the latter told him where the rich people and the women were in the area.

The robber was riding a white horse, just as the deity had said. The monk remembered his dream and thought: “I’m already a sinner that I deserve death. If I took you to others so that you could rob them and violate the women, I would have committed more sins.” He answered the robber loudly: “I’m not taking you there. Are you not Zhu Er? I’ll let you kill me. Take my life and no one else’s.”

The robber was shocked. “How did you know my name? You must be a divine monk!”

The monk told him about the dream he had had the night before.

It struck a chord with the robber. He threw his weapon on the floor and said: “One bad turn deserves another. The deity said he could not save you, but he already did. By refusing to take me to other people, you have saved yourself. I don’t see why we can’t resolve our bad blood right here.” He kowtowed to the statue of the deity three times and left.

Thanks to his benevolence, not only did the monk save others from being killed, but he also saved his own life. The robber Zhu Er was not totally without compassion. He realized that one bad turn deserves another, and he chose to resolve the bad blood by forgiving the monk. He also decided to turn over a new leaf. When a person truly believes in deities and looks up to them, he will be saved by their grace.