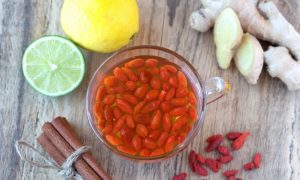 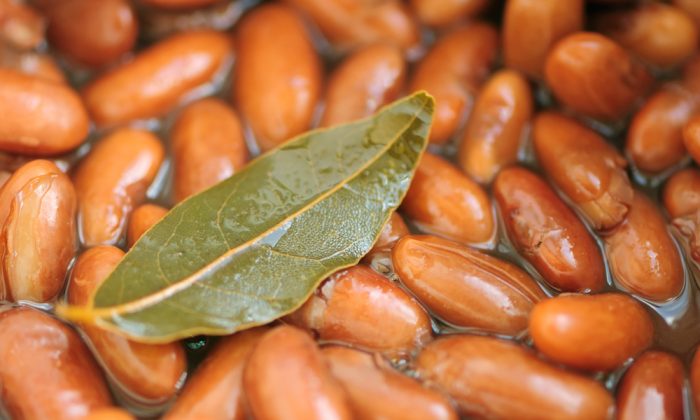 Bay leaf adds great flavor to beans, and anything else that simmers for a length of time. (Shutterstock.com)
Alternative Health

That single leathery leaf you occasionally find in your soup, it’s called bay.

Bay leaf has a unique and complex taste—hints of clove, pepper, and eucalyptus with a pleasant woody bitterness. It is not poisonous, as many believe, just really hard to chew.

Once bay imparts its subtle flavor to a recipe, the stiff leaf is usually discarded before serving. It can be a choking hazard—especially for children. Cooking softens bay a bit, but it still takes some determined gnawing to break down. In a few unfortunate cases, bay leaf pieces have had to be surgically removed from the intestines.

In ancient Greece and Rome, bay symbolized victory. Winning athletes, top scholars, and soldiers triumphant in battle were all crowned with bay wreaths to honor their accomplishment.

Bay still signifies achievement, although it’s in name only. An undergraduate or “bachelor’s” degree comes from “baccalaureate,” a Latin word which means “berries of laurel.” The terms “poet laureate” and “resting on one’s laurels” also borrow from the symbolism of accomplishment synonymous with bay.

What makes bay so great? According to the ancient Greeks, this leaf gave the oracle at Delphi the insight to predict the future. As she chewed aromatic bay leaves the oracle was able to hear messages from Apollo—a deity for whom bay was sacred.

For centuries, bay was revered as a plant that offered protection from evil and divine inspiration. While scientists have yet to verify its supernatural attributes, they have discovered a wealth of vitamins (A,C, and B), minerals (copper, magnesium, iron, and selenium), and antioxidants. The essential oils and other phytochemicals in bay can help digestive upset, relieve pain, calm a cough, and ease menstrual problems.

Modern herbalists still use bay for these ailments, and have even added a few others. A 2008 study found bay to be effective in reducing blood glucose, improving insulin function, and lowering cholesterol.

Bay leaf has a mild narcotic effect, which means that it calms the mind and relieves pain. A cup of bay tea can soothe a headache (some call bay the “headache tree”), and encourage a sound sleep.

Consider bay leaf next time you’re suffering from a chest cold. It has a mentholated quality that can help remove phlegm stuck in the lungs.

Bay also helps regulate menstruation and resolve vaginal discharge—add essential oil to hot bath water and soak. It has antibiotic properties that make it valuable in healing wounds and treating kidney infections. Drinking this mildly astringent tea has also been known to stop a nose bleed.

It’s nice to have access to fresh bay leaves, but dried also work well, provided they’re stored properly. Dry leaves are less bitter than fresh, and keep up to a year in a sealed container. Time and exposure to air eventually strip the leaves of their aromatic essential oils. For this reason, it’s best to buy your leaf in small quantities.

Adding bay to food is the most common application. Soup stock, beans, tomato sauce, rice, even desserts like custard—basically anything that simmers for a length of time can benefit from a little bay. It not only adds a subtle flavor, but the antimicrobial properties from just a couple leaves can help food last longer.

Powdered leaf can be added to foods if you want the bay flavor without the risk of leaf shards. The spice blend known as Old Bay is basically a seasoned salt heavy on the powdered bay.

Bay leaf keeps pests away. For centuries, people have stored grains and beans with a handful of bay leaves to deter rodents and insects, thanks to a compound called eucalyptol. For this reason, it is also used in treating lice.

If you can find a steam distilled essential oil of bay laurel (most “bay” oils are other plants) it is useful to have around for all types of ailments. Apply topically to areas of pain or tension.

But go easy. Bay oil contains eugenol—a compound also found in clove, cinnamon, nutmeg, oregano, and thyme essential oils. Eugenol is not a problem when dealing with the whole leaf. But a concentrated oil may irritate sensitive skin, and should be avoided in pregnancy and with small children.

Whether for medicine or just as a relaxing beverage, tea is one of the safest, easiest, and most effective ways to use bay. The addition of orange peel in this recipe adds a complementary flavor, and another digestive aid.

Add 6 to 7 bay leaves (fresh or dried) and the peel of one orange (preferably organic) to one quart of water. Bring to a boil, cover, and reduce heat to low (covering preserves essential oils). Simmer for at least 30 minutes before serving.

Lots of leaves go by the bay name, but they can differ considerably from bay laurel, a Mediterranean native. West Indies bay is a key ingredient in the classic Bay Rum aftershave. Indonesian bay leaf tastes similar to cinnamon. A type of bay leaf from India is used to scent rice.

Mountain Laurel and Cherry Laurel are American natives related to bay laurel, but they are toxic. Many bay leaves sold in the United States are usually Californian bay leaf, unless specified otherwise. California bay has similar properties and a stronger mentholated taste than genuine bay laurel.