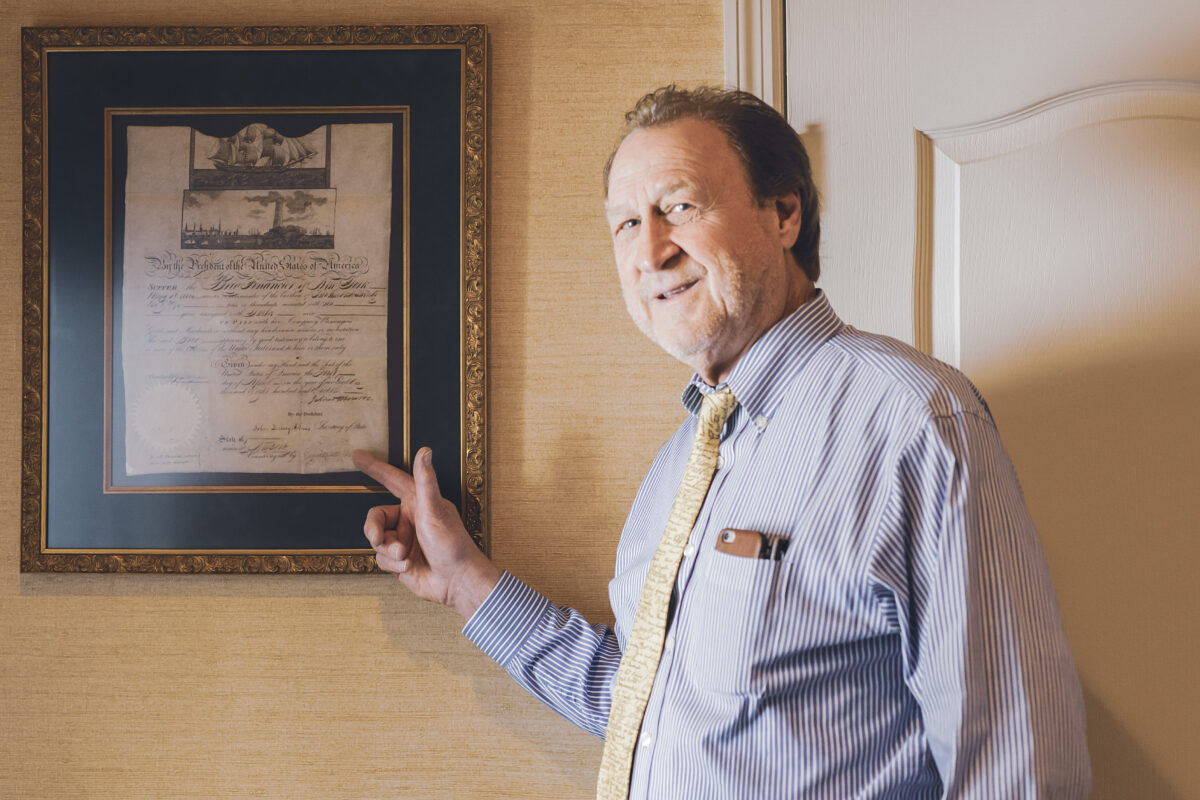 Howard Zerwitz tells a story about James Monroe in relation to this document with his signature. (Tatsiana Moon for American Essence)
Bright

The Niche Business of Collecting Historical Letters and Documents

“I sold a Napoleon letter yesterday,” remarked Howard Zerwitz. This kind of thing isn’t unusual for him, since Zerwitz’s American Historical Guild (AHG) provides historic autographs, documents, letters, and other artifacts to collectors around the world—all reflecting historic events. Zerwitz has sold letters and documents from every American president, as well as letters from people like Thomas Edison, Albert Einstein, and Mark Twain.

In his niche Long Island business, Zerwitz has been dealing with pieces of history for some 40 years. Yet he wasn’t particularly drawn to history during his school days. His love for history, and his desire to preserve it carefully and accurately, has grown gradually—alongside his collections.

Zerwitz works with documents and artifacts that begin in the $500 to $1,000 range, and increase in value according to their rarity and historical significance. He reports that his clients include small-business owners, doctors, teachers, police officers, and Fortune 500 CEOs. “They all share a love of this nation’s history,” he explained. “In view of the modern range of communication,” he laments, “letters are a dying form of correspondence.” For this reason, he enjoys preserving historical letters for future generations.

AHG collections range from the Revolutionary War era through the present day. They contain material from American presidents, the Civil War and its generals, and other military members and eras. They include materials from science, aeronautics, literature, and the arts, as well as from icons of American history and beyond.

Zerwitz majored in business at the University of Maryland. During those years, he said, “I bought a book for a dollar in a used bookstore about collecting autographs.” As a kid, he had collected sports autographs. But gradually, he found himself drawn to dealers and auctions with letters or autographs from historical figures.

During the ‘80s, Zerwitz reports that, for seven years, he owned a red 1960 two-seater Mercedes convertible. Then in his early 30s, he planned to restore this car. He considered it to be his “sunny Sundays” car. But when he needed funds to start his business, he sold his beloved car to buy autograph material for his inventory.

He recalled that he then distributed a catalog and put some ads in a few national magazines about collecting historical autographs. “Through these efforts, I connected with a few customers who decided to build collections, and my business had begun,” he said. In the beginning, he pursued this interest part-time, but it gradually became his own full-time business.

Zerwitz wasn’t an expert when he began collecting. He found other people who did what he wanted to do, and then he began going to auctions and shows, where he often talked with other dealers. Soon, people were asking him questions, he said. Now, he has clients across the country and around the world.

The standard of authenticity is key to his business, Zerwitz explains, and this aspect requires an expert, as well as someone in whom clients have confidence. While forgery isn’t a major problem, Zerwitz noted that it does happen. He ensures that items haven’t been signed by a secretary or by autopen, a machine that replicates signatures. A layman wouldn’t recognize the difference, Zerwitz said, but he does. Correctly appraising items is also vital to his business. He doesn’t sell reproductions. His collections include, for example, signatures on a menu or in an autograph album.

Zerwitz’s unique business isn’t a legacy. His dad was a pharmacist who owned a drugstore. He grew up in Maryland, but he remembers traveling to the Forbes Museum in New York, which was free and open to the public. He remembers that Malcolm Forbes collected antiques, Fabergé eggs, letters, and documents. When Malcolm was a kid, his dad, B.C. Forbes, founded Forbes Magazine, and Malcolm began with letters that had come to his dad. He would clip autographs from letters he found in his dad’s office.

Autographs were popular during the 1800s, according to Zerwitz. Signatures were often clipped from the items they were on, and then glued into albums. A common practice during that era, he recalled, was to clip signatures, and then throw away the documents on which they were found.

Zerwitz’s sources are auctions, estate sales, and individual collectors who have items that have been passed down within their families. He sometimes meets people, in various settings, who have historic items in their personal collections. Zerwitz doesn’t deal in art, but he has had letters signed by famous painters and composers, and his collections include books autographed by famous authors.

He’s handled wonderful letters over the years including a Ben Franklin letter introducing Thomas Paine, who had just written “Common Sense,” a pamphlet that motivated early colonists to revolt against Mother England; and a letter to Orville Wright, from a man who was suggesting a wing design. Wright wrote back, Zerwitz said, explaining why the suggestion wouldn’t work, but thanking the man for the letter. Also, there are Einstein letters containing math problems and physics discussions that Zerwitz indicates “sailed right over my head,” written to others who had mastered these subjects.

Zerwitz recalled that he sold a George Washington letter, in which Washington was arranging to have a slave, who had shown up at Mount Vernon, returned to South Carolina. Washington wrote the letter to his friend James McHenry, first Secretary of War and the namesake of Fort McHenry, where the “Star-Spangled Banner” still waved after a key War of 1812 battle. The slave had picked up mules at a Baltimore port and transported them to Mount Vernon. Washington was arranging for the slave to be taken by boat back to South Carolina.

Zerwitz once bought a Thomas Jefferson letter from the early 1800s, which had belonged to a woman’s family since the time he had written it to her great-great-grandfather. He also reported that he has had a number of letters from Abraham Lincoln, releasing Confederate prisoners from Union prisons if they would take an amnesty oath, asserting their loyalty to the Union and pledging not to rejoin the Confederate army. Zerwitz cited the hardship that having the family bread winner in prison had caused many families at that time.

Artifacts signed by Lincoln start at $8,000 to $10,000. The topic of a letter determines its value, Zerwitz, explained. For example, a personal letter would not be priced as highly as one saying that Lincoln would sign the Emancipation Proclamation the next day. Appointment documents for military officers have been included in Zerwitz’s collections. He indicated that these letters are not personally signed by presidents now, but for example, Lincoln signed thousands of them during the Civil War. These have been included in both private and public collections. Zerwitz also recalls selling a Robert E. Lee letter, warning of an impending Union attack.

He has also sold letters about Edison’s exploits in inventing incandescent bulbs and the phonograph. Creating a filament for the first incandescent bulb that was both reasonable in cost and effective, was a primary challenge for Edison. Zerwitz explained that Edison “worked to invent things that had practical value.” For example, people didn’t have electricity in their homes at that time, Zerwitz noted. Edison was a man of a thousand patents. He also invented electrical-generating systems that distributed electricity to homes around power companies. But “the phonograph was Edison’s favorite invention,” Zerwitz said. “People didn’t have music in their homes at that time unless they had live musicians performing,” he explained, regarding Edison’s work to invent the phonograph.

In addition to buying items for his own inventory, Zerwitz also represents clients at auctions. He indicated that about half of his time is spent learning what his clients are interested in. He then pursues items that they would like to acquire. He reported that he had just purchased, on behalf of a client, a John F. Kennedy letter from the 1960s, written to prominent supporters of the Nuclear Test Ban Treaty. In that letter, JFK discussed his efforts toward obtaining agreement from Soviet Premier Nikita Khrushchev to work toward reducing the nuclear arsenal, with the goal of reducing nuclear proliferation and atmospheric testing. Zerwitz indicated that Khrushchev signed the agreement a month after the date on the letter.

He recalled that he sold a letter from the mother of alleged JFK assassin, Lee Harvey Oswald, written after Oswald had been killed by Jack Ruby. His mother’s letter reflected that she wanted the insurance company, with which she had a policy on her son, to pay the policy proceeds. However, “she had stopped paying premiums, and the policy had lapsed,” according to Zerwitz.

Zerwitz reports that he’s an avid tennis player in his spare time. He plays indoors, September through May, twice a week. His wife, Meryl, plays tennis too, he said. She also teaches yoga classes, and during the pandemic, she taught “Zoom yoga” classes. He reports that doing yoga stretches has improved the comfort of his back, which had suffered some from 50 years of tennis.

Now in his seventh decade, Zerwitz continues to build his collections, researching and acquiring new pieces. His decades of working to do his part toward accurately preserving this nation’s singular history reflect both a commitment and patriotism that have grown steadily over the years.