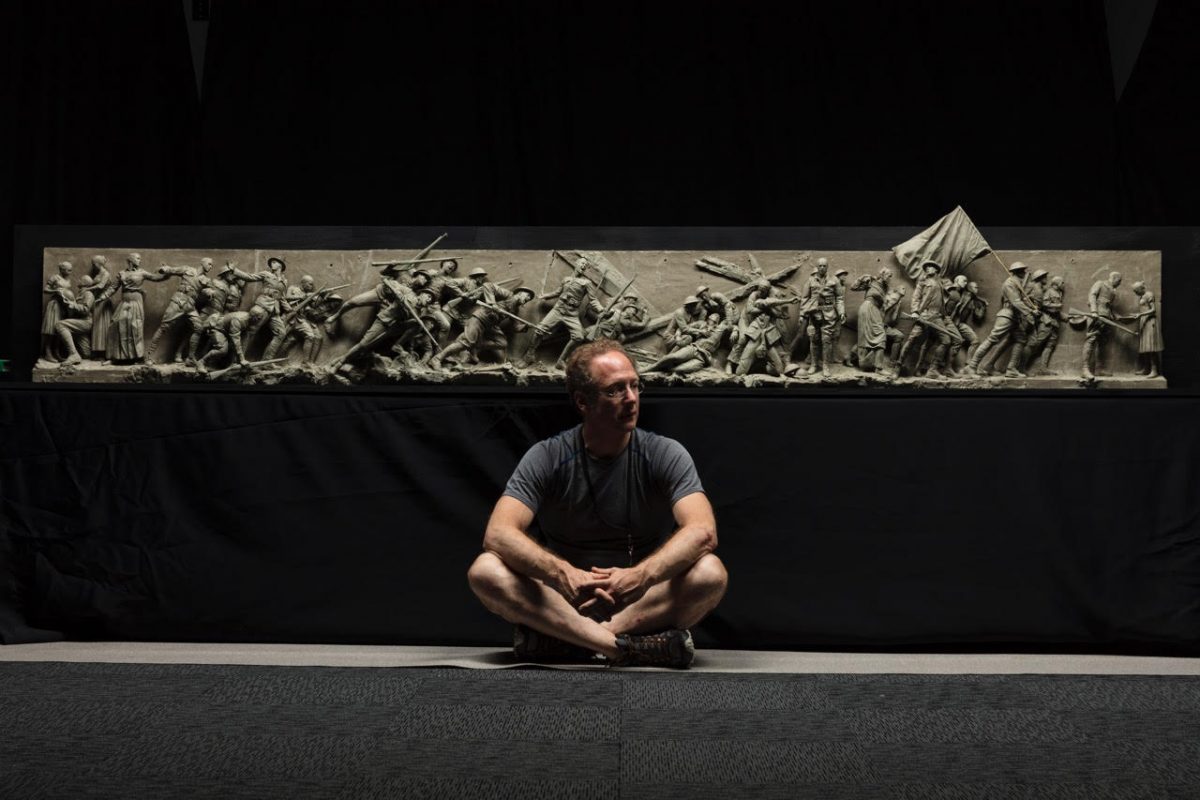 Sculptor Sabin Howard sits with the maquette he created for "A Soldier's Journey," the sculptural component of the National World War I Memorial, at Weta Workshop in Wellington, New Zealand, in November 2017. (Courtesy of Sabin Howard)
Arts & Culture

WASHINGTON—Wounds of history, however long ago inflicted, can begin to heal as soon as they are acknowledged. World War I ended 100 years ago. Many of the conflicts the United States is engaged in around the world can be traced back to the country’s most forgotten war. Its unlearned lessons, traumas, and repercussions continue to haunt us, more than we realize, perhaps because those who served have yet to be publicly honored to the extent warranted. To that end, the National World War I Memorial in Washington is finally in the making.

An act of Congress in 2013 created The U.S. World War I Centennial Commission, which selected the competition-winning team—architect Joe Weishaar and sculptor Sabin Howard—who had proposed the concept for the memorial “The Weight of Sacrifice.”

“We want people to come face to face with the humanity we find in those who served in this war. … It may be long overdue, but today marks another point in the journey of making sure they are not forgotten,” said Weishaar, the architect and lead designer of the memorial, on Nov. 9, 2017, at the official groundbreaking ceremony in Pershing Park, with views to the White House.

While the groundbreaking ceremony was taking place, sculptor Sabin Howard was at Weta Workshop in New Zealand, designing and sculpting the small-scale model for the sculptural component of the memorial—a 65-foot-long bronze relief titled “A Soldier’s Journey.”

Howard has been designing the sculpture for two years. He started by taking photos of models wearing World War I uniforms in action poses and drawing scrolls of the storyline. He revised the design concept about a dozen times, while intermittently presenting it to the commission for feedback.

“Designing a memorial on federal property in the nation’s capital in an existing park is a very complex design challenge,” said Edwin Fountain, vice chairman of the U.S. World War I Centennial Commission, at the groundbreaking ceremony. “There are many different voices to listen to and considerations to balance. That’s been a challenge, also the fundraising, but today we are making significant progress on both of those fronts and it makes me very optimistic for bringing this to a conclusion.”

By mid-December, Howard finished the 9-foot-long maquette (one-sixth in scale) with 38 figures. In February 2018, he will present it in Washington to the Commission of Fine Arts, which oversees the project.

After it’s approved and any agreed-upon changes incorporated, he will create a medium-sized, 18-foot-long maquette (one-third in scale) that will enable him to finally extrapolate all the design details to the full-sized sculpture. Once “A Soldier’s Journey” is completed, the 65-foot-long relief sculpture (with the tallest figure standing at 7 to 8 feet) will be the largest bronze sculpture of its kind in the world.

On March 21, Howard will give a public lecture and until March 23 will exhibit his drawings and the small maquette at the New York Academy of Art (his alma mater). Also, a documentary film about the making of “A Soldier’s Journey,” produced by Weta Workshop, will be released in March.

“Sometimes things that are very profound are very simple,” Howard said on the phone a few days after he had completed the small maquette. “The war is ultimately about people. These are real people [who served in World War I].” The responsibility he feels in doing them justice stays in his mind constantly throughout his creative process.

More than four million American families sent their sons and daughters to serve in World War I. The casualty rate was greater than in World War II, totaling 116,516, and another 200,000 were wounded. But the numbers, even names, can become an abstraction, if that is all we see. Numbers tell only a fraction of the significance of the war that was supposed to end all wars.

To create a memorial sculpture that would move people emotionally, Howard had to come up with a universal theme. After the groundbreaking ceremony, Fountain said, “We wanted the memorial to be educational without being didactic. We wanted it to have a strong emotional content; we wanted it to convey—not entirely realistically—but to convey in some sense what the struggle was like and what it was about … By its monumentality, it conveys that this was a major event, worthy of commemoration and education, and it gives a sense that it was a bloody war like all the other wars. American troops did brave and heroic things.”

Howard’s wife, the best-selling novelist Traci Slatton, suggested that Howard refine the story structure of “A Soldier’s Journey” after Joseph Campbell’s idea of the “hero’s journey,” the monomyth template for storytelling found in various cultures worldwide. This metanarrative structure is also embedded in books and in films such as “The Lord of the Rings” and “Star Wars.” It’s only fitting that through serendipitous events, Howard met Sir Richard Taylor of Weta Workshop, who invited him to work on the maquette in New Zealand. Weta Workshop produced sets, props, and miniatures for director Peter Jackson’s film trilogy “The Lord of the Rings.”

The narrative of “A Soldier’s Journey” progresses from left to right in a series of tableaus that overlap and transition into one another. The two ends of the relief are bookmarked by the soldier’s daughter. In the initial scene, the soldier is about to leave his family. He’s on his knee, facing his daughter while they both hold his helmet. His wife literally and figuratively stands behind him and places her left hand over his shoulder near his heart. It’s as if the family is coming to terms with the imminent sacrifice.

In the next scene, the wife is moving in two directions; her feet face the past scene on the left, and her head faces again to her husband on her right who is now departing and moving forward in a rush to join his fellow soldiers. The battle begins at the edge of the trench. All the soldiers are charging forward in full force. They are led by a figure representing the gunnery sergeant Daniel Joseph Daly who before charging the Germans during the Battle of Belleau Wood yelled to the men in his company, “Come on! … do you want to live forever?”

That figure representing Daly is in the center of the composition. His chest is open. It’s about “courage and the strength to go forward into places that you have never traveled to before. They are stepping into the void,” Howard said in a preview video of the documentary that will be released in March.

Daly’s outstretched arm directs you to the following scene about the cost of war—the wounded men. Their fellow soldiers carry them, showing the camaraderie of brothers-in-arms. The helmets on the ground represent the unknown, fallen soldiers of the war. A nurse, representing the caretaking and fortitude of the women who served, holds a blinded soldier affected by mustard gas, one of the many horrors of the war.

The next figure stands away from the wall, shell-shocked. He’s the only figure in the composition who faces the viewer. It’s a powerful juncture in the composition. It’s about connection. The viewer “can look into the eyes of this soldier and sense the emotional gravitas,” Howard said. The following scene shows the hero returning home. A group of soldiers march forward, strong again as they proceed into the future. One carries a flag, which is the highest point in the composition. “This flag bearer and grouping represent the way our country changed, how it became an industrial superpower from an agrarian nation,” Howard said.

Finally, the soldier returns to a quiet scene where he hands his helmet to his daughter, who looks into it as if it is a vessel. “She divines the future and she represents the next generation, which is World War II,” Howard said.

Slowing Down to Reflect and Learn

Together with Weishaar, Howard had decided to create a sculpture in relief on a wall that would fit at the west end of Pershing Park and that would face the existing sculpture of General Pershing, across a reflecting pool. A relief is also the most efficient way to tell a story in sculptural form because many figures can be incorporated into a compressed pictorial space that is three-dimensional.

“There’s also a time factor in the whole idea. When people walk along the relief, they will slow down to see the scenes change from one to the next. There’s a flow [to the composition], and it’s very unified,” Howard said. Every element is interlaced and integrated in the composition.

At one time, especially during the Renaissance, sculpture played a role as wide and as significant as film does today. It brought people together, providing an opportunity for catharsis, “psychological relief through the open expression of strong emotions,” Sabin wrote in a blogpost. “When we go to the theater to see a film, we ultimately feel like we belong to something bigger than ourselves. It’s a community experience that is about feeling a kinship with other humans. It is about connecting.”

In many ways, Howard’s World War I memorial sculpture will be like a permanent film cast in bronze. It will provide endless opportunities for people to learn, to heal, and to move forward. Not only will it honor the 4.7 million Americans who served, but it will also bring attention to the many lessons still to be learned from the most consequential event of the 20th century. It will no longer be the country’s most forgotten war.

The U.S. World War I Centennial Commission is looking to raise $50 million in private funds for the National World War I Memorial and plans to inaugurate it on Nov. 11, 2018, the 100th anniversary of the end of the war.