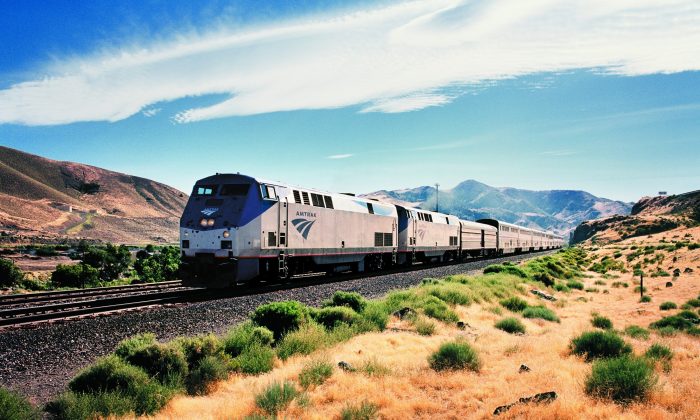 An Amtrak long-distance train near Washington, D.C., on Sept. 24, 2014. (PRNewsFoto/Amtrak via AP)
Travel

A classical mystery writer could easily plot a story aboard Amtrak’s Auto Train. It is elegance in motion, an inn gliding across the country. It has a decidedly American personality.

In the ’70s gasoline was cheap, and Americans had love affairs with their cars. A flock of cars traveled from the frigid north to Florida’s sunny shores in the annual migration of snowbirds. But as aging took its toll on the snowbirds, the drive lost its allure.

A steady, comfortable trip by train became an attractive alternative. But the problem was not being able to bring a car for the lengthy sojourn in Florida.

It is what first class airline travel was many years ago, without the hassle of today’s airline terminals.

Eugene K. Garfield led a U.S. Department of Transportation study to determine the feasibility of a train that would carry passengers and their vehicles along the northern corridor. He found it was possible to board vehicles in large, enclosed autoracks and provide comfortable passenger accommodations at the same time.

By Dec. 6, 1971, operations were in place for what is today the most profitable long-distance train in the country.

I watched out the large observation windows in the lounge cars as we crossed the Potomac River. I followed the horizon with my eyes as the train followed its tracks along majestic bays. The bright colors of sunset are followed by the warm lights decorating Victorian homes during the Christmas season.

“We are going to pass Quantico, Virginia, the FBI National Academy, and U.S. Marine Corp base is coming up,” announced Roberto Lizano, an affable chief of services onboard. The sights outside the train were interesting and varied, and the atmosphere within was friendly.

Lizano always makes sure to greet passengers in sleeper service and to insure requests are honored during the trip. Veteran travelers Bruce and Gloria Bartow, for whom Auto Train travel is a regular ritual, call ahead to find out when their favorite service personnel are working: “We’ve traveled with Roberto several times. The staff make the trip enjoyable and we look forward to being greeted as friends,”

The Bartows brought their van along. In an era when greedy airlines limit baggage to 50 pounds and charge extra to check it, Auto Train doesn’t charge extra for larger vehicles. Passengers can load their vehicles with everything they need, take minimum carry-ons to the passenger cars with them, and feel assured they will be taken in hand by capable staff once aboard.

I settled into the leather-like seats in the dining car, with a flower-filled vase on elegant linen spread out before me.

“I have been with Amtrak since 1984, I joined a year after they started service,” said Dorothy, my server. Amtrak had taken over the Auto Train from Garfield’s company in 1983. Dorothy said she has not lost her enthusiasm for making diners feel at home.

While the accommodations feel refined, the down-to-Earth American classics aren’t missing. Burgers, movie screenings, vanilla ice cream, and a family-friendly setting are all part of the experience.

Amtrak used to offer complimentary wine, cheese, and fruit. Though this is no longer offered, coffee, tea, and hot chocolate are complimentary, and continental breakfast is included.

Amtrak’s cheesecake is exceptional, 350 calories or not.

There are two classes of service on Auto Train: sleeper and coach. Sleeper class is first class in every regard, with comfortable rooms and a special lounge and dining car. Coach class provides large reclining airline-type seats with meal included in a dining car.

Bunks fold down in the sleeper-class rooms—the classic overnight train experience. Kids flip coins to see who gets the upper bunk.

The room has a bathroom with shower, toilet, and sink, as well as comfortable seating near the large windows. Curtains offer privacy and shroud the car in darkness for sleeping. It has all the little details—automatic flushing on the toilet, a full-length dressing mirror, complimentary bottled water, fragrant soap, tissues, and more.

Accommodations and the greatest care are also offered for handicapped passengers from beginning to end.

As the trip wound down, passengers returned to their sleeper rooms or coach seats to sit and enjoy the final phase of the journey. Florida’s palm trees greeted us outside the windows, the herald of warmth and rest for migrating snowbirds.

The passengers left the train first, then waited for their vehicles. Many chose to wait outside after the overnight voyage. The valets pulled up, reuniting vehicles and passengers. It usually takes no more than half an hour to get the vehicle, but some passengers decide to pay a $50 supplement to give their vehicles priority in offloading.

The service could not make it from Maine to Miami as Garfield originally envisioned. “The Autoracks are more than 20 feet high. They are too high to pass under Washington’s First Street tunnel,” Conductor Charles Parker explained. “The bridges up toward New York cannot handle the long train.”

Service is offered instead from Lorton, Va., (about a half-hour south of Washington, D.C.) to Sanford, Fla., (some 20 miles from Orlando).

All in all, the price of travel can be less expensive than a driving trip that would include overnights, meals, tolls, and fuel as well as wear and tear on driver and vehicle.

Auto Train’s main engine and maintenance shops are located at Sanford. The massive General Electric P40 diesel-electric locomotives are modern behemoths that can speed as many as 50 autoracks and superliner passenger cars along.

The Auto Train is a fun way to travel the eastern corridor. The overnight is restful and the meals tasty. All in all, the price of travel can be less expensive than driving that would include overnights, meals, tolls, and fuel, as well as wear and tear on driver and vehicle.

Amtrak is offering a sale on Auto Train coach seats for only $95 from now until Feb. 29, 2016. For more information visit Amtrak.com or www.autotrain.com. The toll-free phone number is 1-877-SKIP-I-95.