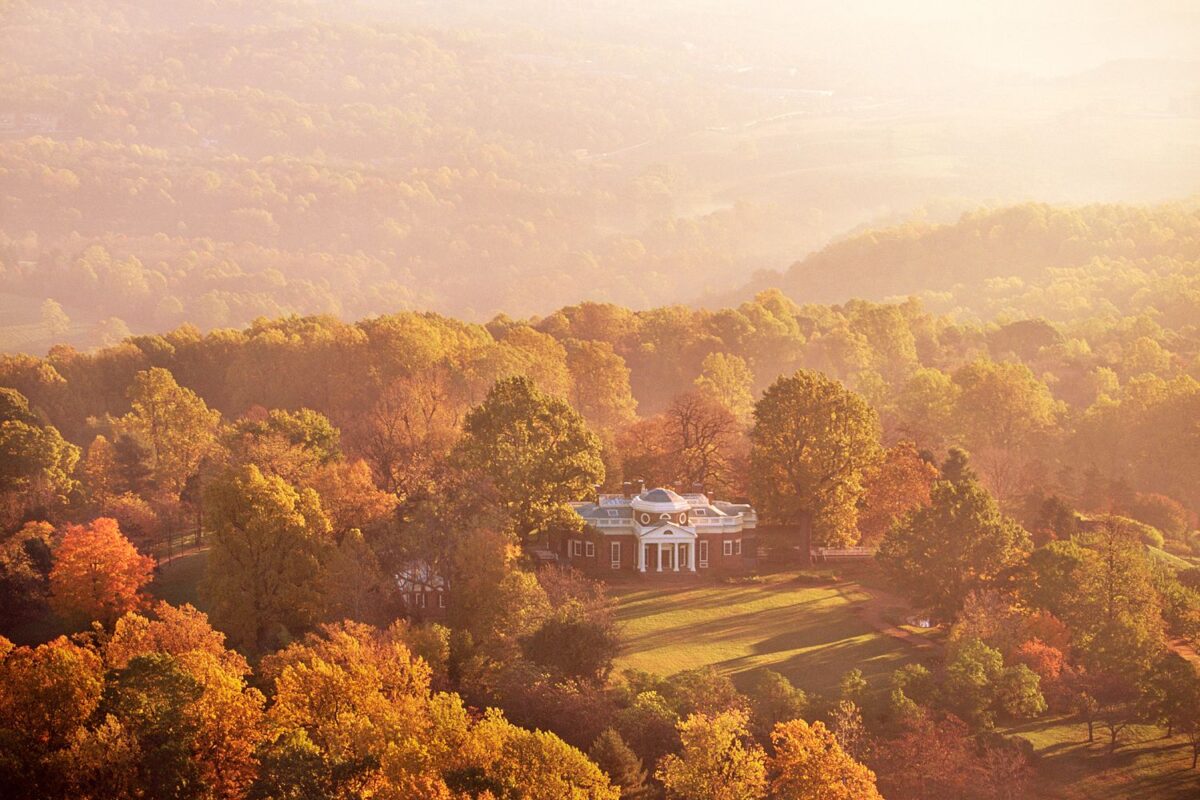 Aerial view of Monticello from the west lawn, also known as the "nickel view." (Courtesy of Robert Llewellyn)
Arts & Tradition

The Mind of Monticello: Thomas Jefferson’s Monument to American Innovation

Opened to the public in 1924, Thomas Jefferson’s beloved home of Monticello in Albemarle County, Virginia, is one of the most recognized buildings of early America. Its unique facade is reproduced on our nickel. Monticello (Italian for “Little Mountain”) is still a favorite destination for adults and youth, as all are treated to a look into the amazing gifts of America’s third president. Thanks to the efforts of the Thomas Jefferson Foundation, which purchased the house in 1923, Monticello has been lovingly restored and preserved as it would have been in his time—a monument to a man and his genius.

Walking into Monticello’s great entrance hall, you soon realize this is no ordinary home. The hall is more like a museum than a grand entry, with moose and elk antlers, a map of Virginia, and even a model of Egypt’s Great Pyramid on display. George Ticknor, a scholar who visited Jefferson at Monticello in 1815, noticed one wall filled with many “curiosities” that Lewis and Clarke had found in their “wild and perilous expedition” into the Missouri Territory. Notably absent is any sort of grand staircase; Jefferson hated stairs, thinking them a waste of space. The man authored the Declaration of American Independence, spoke five languages, and dabbled in scientific investigation and invention. Monticello is an amazing testament to the life of the man himself.

Often, school children’s most vivid memory of their visit to Monticello is “the great clock.” The clock face of this unique invention rests above the front door. It is powered by gravity—cannonball weights descend down the side walls of the entranceway as the mechanism ticks off the minutes and hours. There is not enough vertical wall space for the clock weights, so they descend to Sunday through a hole cut in the floor. Touring the lower level, guides point out the last cannon ball mark for Sunday in the basement. There is a folding ladder in the foyer for the winding of the great instrument. Thomas Jefferson started sketching his design for the clock in 1792. It was constructed by Peter Spruck of Philadelphia and installed in the house in 1804–1805.

For Jefferson, Monticello was the consummate do-it-yourself project. He began planning his “Little Mountain” estate in 1768, having inherited several thousand acres of land at the age of 21. A well-endowed member of his class would normally create a great Georgian house with a grand center hall. Jefferson, a devoted student of the Italian Renaissance, envisioned something more in keeping with that tradition. This decades-long experiment in architectural design, which involved several instances of tearing down portions of the house and building them in a different form, would ultimately drain his finances and strain his family. However, what he built would survive the Revolution and Civil War to stand as a monument to American innovation.

Jefferson started sketching out his original plans for the buildings of Monticello in 1769. The main home would be a two-story building with double porticos and classical columns. He had already cleared the hilltop site for it, envisioning a design in the manner of Renaissance architect Andrea Palladio. Jefferson was well acquainted with Palladio’s Four Books of Architecture, “I Quattro Libri,” which were originally published in Italian in 1570. Not only did he glean from them a fine sense of symmetry and proportion, but also an ordered site plan for the great estate in the manner of Palladio’s villas. As the main house and its wings rose on the hilltop, Jefferson completed the South Pavilion or the “Honeymoon Cottage.” The South Pavilion is a one-room house with a kitchen below. Here he brought his bride, Martha Wayles Skelton, in 1772.

The wedding took place on New Year’s Day in 1772 at the Wayles family estate. When the couple stole away to Monticello, they did so in a blizzard. Martha, born to a prominent family, was carried into a one-room house amid a construction site! Jefferson had married above his station, but it was a marriage made in heaven. Music, one of Jefferson’s many interests, had first drawn them together. In their courtship days, Martha would often sing accompanied by Thomas on the piano. In 1774, the couple moved into the main house at Monticello with two young children in tow. They would have six children in all, but only two would survive to adulthood—Martha, the eldest, and a younger sister Mary.

Most men, having constructed such a grand house, would be content with modest improvements and additions. Thomas Jefferson certainly was not like most men; he constantly changed the spaces he lived in—even those he did not own! He paid for renovations to the interiors of houses he rented in Philadelphia, New York, and Paris, and he made changes to the gardens as well. It should come as no surprise that the Monticello we know today is the house he totally rebuilt in 1796. Whole portions of the original were torn down, and the house increased in size from 7 rooms to 23. The second floor was remade as a mezzanine level hidden by a massive railing and cornice designed to fool the eye. A third-floor dome was added—its design was taken from a temple of the goddess Vesta found in Palladio’s drawings. So, in the absence of any great staircase, how did you get to the upper floors of Monticello? An inconspicuous room, seemingly the size of a closet, is where the great designer hid his stairs. Viewed from the ground, the dome rises over what appears to be a single-story villa. Historians began to call this the “Second Monticello,” and it is this renovated house that we recognize today.

Jefferson planned his spaces around public and private functions. In the spirit of Palladio, the house is designed in deference to the rotation of the sun. Rooms were situated for optimal natural illumination. The parlor, dining room, and tea room were placed in the northwestern quarter of the house to catch the last rays of evening light. Their orientation northward served to protect diners from Virginia’s summer heat. His foyer served as a display of his many interests, a fitting place to receive his unending stream of visitors.

His bedchamber, in contrast, was created to facilitate his typical busy day. The bed was crafted in an alcove, placing it between the bedchamber and Jefferson’s study. Monticello tour guides help us to imagine the great statesman jumping out of bed to his “study” side to quickly note midnight ideas at his desk. In the morning, he would exit the other side of his bed to dress in his bedchamber. This design allowed the great man to efficiently work at his daily tasks in one location—providing the ultimate home office. Here Jefferson would answer an unending stream of letters, record the weather, and attend to the management of his estate. The room is filled with Jefferson’s books, papers, globes, artwork, scientific apparatus, and a device that he called “the finest invention of our present age,” the polygraph. It is a device that allows writing a letter and making a copy to keep for your records in one operation. Also in the room is a copy of the Declaration of Independence. Not one to waste space, Jefferson placed long-term storage above the bed alcove and ventilated it with “portholes” that opened into the bedchamber. Such inventiveness can be seen throughout the house: The French doors with a sub-floor mechanism to open them simultaneously, the dumb waiter for wine, and the “pass-through” shelf between service kitchen and dining room were all part of Jefferson’s passion to “design for living.”

The expansive estate surrounding his home gave Jefferson ample room to pursue his interest in farming. “Agriculture … is our wisest pursuit, because it will in the end contribute most to wealth, good morals and happiness,” wrote Thomas Jefferson in a letter to George Washington in 1787. Today, only 2 percent of America’s population farm. In Jefferson’s era, locally grown foods were essential, and most of the population were farmers. Even the first industries were tied to agriculture, such as the grinding of wheat and limestone as well as spinning and weaving. Jefferson envisioned a nation tied to the soil. He made many investigations into better agricultural practices and new crops. He even invented the moldboard plow.

His gardens at Monticello were a place to investigate and showcase innovations in agriculture. Jefferson laid out his gardens at a slightly lower level than the house, in order to benefit from the reflection off the mountain behind them and capture the sun from the front. In doing so, he placed them in a slightly friendlier growing zone than the house site at the crest of the mountain. He experimented with 330 varieties of some 99 species of vegetables and herbs, conducting foundational agricultural research for the young country. Jefferson used cover crops and rotation to maintain the quality of his soil. He grew cotton and wheat but abandoned the cash crop tobacco because it was too hard on the land.

Jefferson observed much during his time as ambassador in France. His cuisine at Monticello (and the gardens that provided it) would have to be called “half French, half Virginian.” The eight-acre fruitery at Monticello produced over 170 varieties of 31 species. There was also the South Orchard with 400 trees, and “berry squares” of currants, gooseberries, and raspberries. The gardens and orchards of Monticello were also influenced by Philip Mazzei (1730–1816), a Florentine merchant, surgeon, and horticulturist, who arrived with a group of colonists from Tuscany in 1773. Jefferson, a lover of Renaissance ideas, was grateful for the friendship he cultivated with Mazzei. He offered him land near Monticello and added plants that did well in Tuscany to his own gardens. Although many of the tropical species Mazzei introduced died due to the brutal Virginia winter, his grapes survived. He and Jefferson would make the region’s first foray into viticulture. It would not be until the late 20th century that Virginia would actually develop a large wine industry, but it was first envisioned at Monticello.

It can truly be said that Jefferson’s gardens became a place where a vision was also cast for a rich and diverse agriculture to feed the bodies and souls of the citizens of a young republic. A model was made for a nation of independent farmers and artisans living in close connection with the soil. The estate grounds, along with the amazing innovations of his home’s architecture, interior spaces, and “design for living” inventions, made Thomas Jefferson’s Monticello a valuable part of his legacy to America.