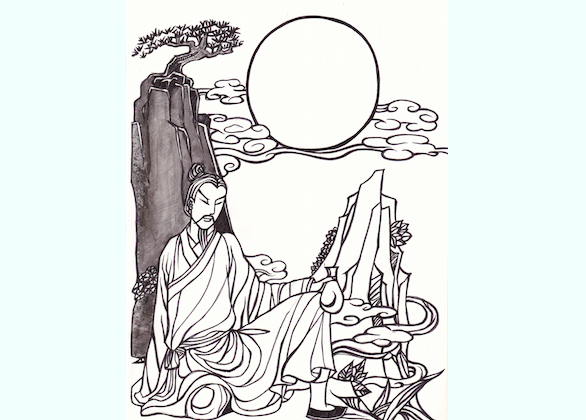 “No one cares about the wind that blew yesterday; the grace of the clear moonlight is the same as years past.” is from a popular poem by Bai Juyi, a renowned poet of the Tang Dynasty. (Blue Hsiao/Epoch Times)
Arts & Culture

Zhongqiu Jie (中秋節), also known as the Mid-Autumn Festival, is an important occasion for family members to get together to admire the full and bright harvest moon and to enjoy eating mooncakes.

While the festival is most often associated with the legend of Chang E, since ancient times, the mid-autumn moon has also been a source of inspiration for Chinese poets. Through poetic verse about this moon, they expressed their joys and sorrows, ups and downs, homesickness and hopes.

Bai Juyi (772–846 A.D.) was a renowned poet during the time soon after the peak period of the Tang Dynasty.

He was born into a poor but educated family. Because of war, his family moved often. Bai passed a civil examination when he was 28. He worked as a scholar of the Hanlin Academy and as a minor palace official during 807–815 A.D.

As an official, his writings made some people unhappy and Bai Juyi made enemies in the court and of other important officials. He wrote two long petitions advocating the end of the wars and a series of poems criticizing officials’ actions and highlighting the people’s suffering caused by war. This cost him his job in the palace.

Although he was recalled to the palace by a new emperor in 819, he kept his straightforward style, which he used for a series of memoranda remonstrating the corruption. Bai was exiled from the capital again in 822.

He was, however, given the important position as governor of several territories over the next 10 years. He wrote many famous poems after he retired and in his later years he became a practitioner of Buddhism.

Bai died in 746 at the age of 72, leaving instructions for a plain funeral and a simple burial in a grave at a Luoyang monastery. He also asked that a posthumous title not be conferred upon him.

Bai Juyi has been known for verse and poetry that is direct and easily understandable. His smooth and plain poetic style became a new literary form, Fundamentally Plain, in Chinese literature.

Watching the moon at Penpu pavilion on Mid-Autumn day
Last year on 15th day of the 8th month,
I was at an apricot garden by Qujiang’s poolside.
This year on the 15th day of the 8th month,
I am in front of Penpu pavilion.
Facing toward the northwest to look for my home;
A few times, I have seen the full moon in the southeast.
No one cares about the wind that blew yesterday;
The grace of the clear moonlight is still the same as years past.
Feelings on watching the moon
The times are hard: a year of famine has emptied the fields,
My brothers live abroad- scattered west and east.
Now fields and gardens are scarcely seen after the fighting,
Family members wander, scattered on the road.
Attached to shadows, like geese ten thousand li apart,
Or roots uplifted into September’s autumn air.
We look together at the bright moon, and then the tears fall,
This night, our wish for home can make five places one.