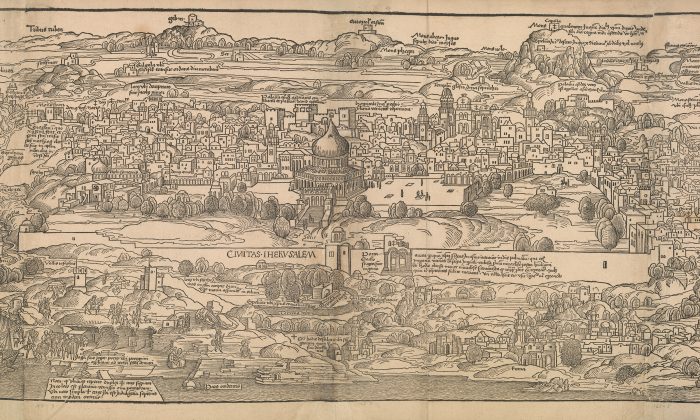 The Met Features Medieval Jerusalem as Destination of Choice, Symbol of Tolerance

NEW YORK—If asked to pick the most culturally diverse and tolerant city in the world today, you might think of Amsterdam, London, Paris, São Paulo, or New York City. But in medieval times, Jerusalem would have readily come to mind.

Beginning at around the year 1000, thousands of people from as far as Iceland and India ventured toward Jerusalem to trade and make a profit and to receive artistic or divine inspiration. The phenomenon of “Jerusalem fever,” as it was described at the time, gripped and tugged merchants, artisans, scholars, and pilgrims of various faiths to a city that is just about the size of Midtown Manhattan.

The Metropolitan Museum of Art attempts to capture this medieval cosmopolitan fever with Jerusalem 1000–1400: Every People Under Heaven. The exhibition opened on Sept. 26 and is running until Jan. 8, 2017, along with a variety of educational programs, tours, live concerts, and a series of talks.

The Met selected more than 200 objects from 60 lenders from around the world—including treasures that had never been loaned before. About one-fourth came directly from Jerusalem.

The planning for the exhibition began about six years ago. Curators Barbara Drake Boehm and Melanie Holcomb explained: “At the time, our thought was that everyone focuses on the biblical Jerusalem or on the present-day city, but there had not been much attention paid to medieval Jerusalem. Because medieval art is our specialty, we felt this was a topic that we could and should study.”

The exhibition is organized thematically into six sections: trade, diversity, religion, war, patrons, and the concept of Jerusalem as a city situated at the gates of heaven, according to the Abrahamic religions of Judaism, Christianity, and Islam. Tying it to the present, it also includes videos giving glimpses of people today reflecting on Jerusalem’s legacy.

The scope and ambition of Jerusalem 1000–1400: Every People Under Heaven, as the title implies, is overwhelming and warrants repeat visits. Perhaps the museum’s decision to take on this epic feat stemmed from a desire to dispel the public’s general tendency to immediately associate Jerusalem with adversity, and to remind us of a Jerusalem that embodied a more generous spirit of tolerance and coexistence, amid its incredible complexity.

“When people plan a trip to Jerusalem—and likely to our exhibition—they have an expectation of what they will see based on their own background. We hope that visitors who come to our show will find not only what they expected but also things they could not have imagined,” Boehm and Holcomb wrote in an email.

The following are snippets of just a few of the many fascinating pieces in the exhibition, which includes illuminations, devotional objects, architectural elements, weapons, ceramics, glassworks, textiles, and jewelry. They each give some insight into what Jerusalem once was, with threads of influence still palpable today.

Upon entering the exhibition, next to a heap of gold coins at the very center, are three astrolabes that were created on the Iberian Peninsula with inscriptions in three languages: Arabic, Latin, and Judeo-Arabic (Arabic written in a Hebrew script). The practical objects, showing a beautiful sense of precision, were used to answer questions related to time, geography, and the position of the stars. Jerusalem is inscribed on all three, “raising questions about the owners’ relationship to the city: was it a focus of business travel, pilgrimage, or religious devotion from afar?” the Met’s description reads.

An English monk, Matthew Paris, who never set foot in Jerusalem, created a map detailing a vivid journey to the Holy Land entirely from his imagination. It serves as a little testament to the grand fascination with Jerusalem. In the map, the monk depicted the port of Acre, a frequent place of arrival for European Christian pilgrims; the city of Tyre, famous for its glassware; and Mount Ararat in Armenia, where Noah’s Ark was believed to have landed, among numerous other intriguing landmarks.

Exquisite, opulent 14th-century Jewish wedding rings from Germany’s Rhine Valley were made in the form of miniature buildings, symbolizing the lost Temple of Jerusalem. The Met’s description explains that they were probably used only during the ceremony, since Jewish law stipulates that wedding rings should be unadorned, but played a vital role in the remembrance of a lost temple that perhaps holds a stronger presence in people’s minds than if it were physically present.

Other objects indicate how significantly charged Jerusalem became as a location to be fought over. A knight of the d’Aluye family, a crusader whose mission was to reclaim the Holy Land for European Christians, chose to be remembered as a warrior. The sculpted figure representing him has a sword that does not match his armor but is typical Chinese weaponry. Perhaps he purchased it from a market in Jerusalem or acquired it in battle. A page from “Saladin’s Treatise on Armor” shows an exquisitely detailed gilded drawing of a shield and concealed crossbow, a weapon intended to bring an end to European control of Jerusalem.

In contrast, Christian Gospel books in Arabic, Greek, Armenian, and Syriac, a Samaritan Bible in a distinctive Hebrew script, and the biblical book of Kings in Ge’ez, an ancient language of Ethiopia, given by that land’s king to his community in Jerusalem, show the incredible spiritual richness at times of greater tolerance in the city.

A total of 10 videos distributed throughout each section of the exhibition show a range of stories from modern pilgrims to scholars to simply travelers.

These videos remind us that Jerusalem is as spiritually vibrant, varied, and complex today as ever.

A textile merchant from Kurdistan describes the striped fabrics he sells to Arabs, the black-and-white vestments he sells to Christian priests, and the embroidered brocade robes he sells to Jewish rabbis.

A scholar in search of Jerusalem’s hidden archives talks about different people preserving the memory of others, of texts translated into various languages. “I think there was much more interaction than we appreciate today. Instead of focusing on the history of Jerusalem as a sequence of wars, it would be more about the exchange—cultural exchange—the debate. It’s fine not to agree but they were talking to each other,” said Merav Mack, a professor at the Hebrew University of Jerusalem and an authority on the libraries and archives of Jerusalem.

A professor of philosophy and Islamic studies at al-Quds University, Mustafa Abu Sway, summed up Jerusalem quite well, not only as a city but also as a place of hope. He said: “There are traders, there are businesses, there are people, families who live here in the Old City. But mostly, Jerusalem is a place of spirituality. Not only al-Aqsa Mosque is there when you enter Lion’s Gate, but all these churches that line up north of the alley. And it’s basically this beautiful mosaic of the whole city. Through which gate you enter, it’s a different experience. And I still find it mesmerizing. It’s poetic.”

A lavishly illustrated catalog by more than 50 scholars from the United States, Europe, and the Middle East, suitable for specialists and general readers alike, is available at The Met Store (hardcover, $75).

Adam Gopnik, critic-at-large for The New Yorker, will be joined by scholars, historians, and other leaders of thought in a discussion series called “Imagining Jerusalem: The Golden City in Art, Lore, and Literature,” beginning Wednesday, Oct. 5. Guests include author Nicole Krauss (Wednesday, Oct. 19); Dr. Nasser Rabbat, the Aga Khan professor and the director of the Aga Khan Program for Islamic Architecture at MIT (Monday, Oct. 24); and Simon Schama, historian and professor of history and art history at Columbia University (Wednesday, Oct. 26). All lectures begin at 6:30 p.m. Tickets start at $40; series $140. Additional information is available at metmuseum.org/gopnik

The oratorio “Al-Quds: Jerusalem“ by celebrated American composer Mohammed Fairouz was commissioned by MetLiveArts for the exhibition. Including poetry by Naomi Shihab Nye, the world premiere will be performed on Friday, Dec. 9, by the Grammy-nominated Metropolis Ensemble with Andrew Cyr conducting. Tickets start at $65.

And, at The Met Cloisters, the vocal ensemble Schola Antiqua of Chicago will perform the sacred repertoire of Jerusalem: Georgian and Armenian hymns; cantorial psalms; Sufi devotional music; and Jewish, Christian, and Muslim calls to prayer. The program, “The Suspended Harp: Sounds of Faith in Medieval Jerusalem,” will take place on Sunday, Oct. 23, at 1 p.m. and 3 p.m. Tickets start at $40.