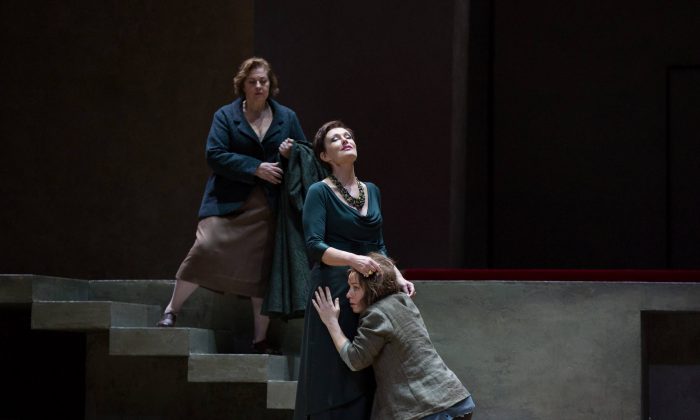 The Met Ends Its Season With a Powerful ‘Elektra’

NEW YORK—Richard Strauss’s opera “Elektra” was the last work staged by Patrice Chéreau. The director died shortly after the opening at the Aix-en-Provence Festival in 2013. Now at the Metropolitan Opera, staged by Chéreau’s assistant director Vincent Huguet and featuring a top-flight cast with Esa-Pekka Salonen conducting, “Elektra” truly electrifies.

The action takes place in one concentrated act. The libretto, by Strauss’s most important collaborator, Hugo von Hofmannsthal, was based on Sophocles’s tragedy.

At the Palace of Mycenae, Elektra is mourning the death of her father. She is the daughter of King Agamemnon and Klytämnestra. When the king returned from the Trojan War, he was assassinated by his wife and her lover, Aegisth. Elektra hopes to kill the wrongdoers with the help of her sister Chrysothemis and her brother Orest, who is expected to return from his travels any day.

While Elektra is consumed by anger, Chrysothemis is more conciliatory, asking her sister to relent before Klytämnestra and Aegisth lock her up in a tower. Elektra refuses to abandon her bloody plans.

This is not an opera where the audience applauds the set or hums the melodies.

Finally, the queen arrives for a heart-to-heart talk with her daughter. Klytämnestra complains of insomnia and nightmares. The queen gets her hopes up when Elektra recommends a sacrifice as a cure, but is shocked when she finds out that hers is the death Elektra has in mind. This ends the mother-daughter tête-à-tête.

After Klytämnestra leaves, Chrysothemis arrives with the sad news that Orest has died. Undeterred, Elektra urges her sister to join her in immediately avenging their father. Chrysothemis refuses and runs away from her murderous sibling.

A stranger, who brought news of the death of Orest, claims to be one of his friends. While Elektra is plying him with questions about her brother, she notices that some of the servants are throwing themselves at his feet. He then reveals that he is really Orest and had made up the story to gain entrance to the palace. She notes that it’s strange that the servants recognized her brother while she didn’t.

In any event, he leaves to perpetrate the slaying of his mother and her lover. Elektra hears Klytämnestra’s final screams. Shortly afterward, Aegisth returns from the fields and meets the same fate as the queen.

Soprano Nina Stemme is justifiably famous for the role of Elektra, and she performs it with boundless energy and determination, plus a huge sound. As is clear from her first scene, this woman doesn’t have a Hamlet complex. She means murder and nothing is going to stop her.

Another remarkable singing actress, mezzo-soprano Waltraud Meier makes Klytämnestra unusually sympathetic. As Chrysothemis, Adrianne Pieczonka is convincing as the most thoughtful of the characters. Bass-baritone Eric Owens is a powerful presence as Orest, the exile and enforcer.

The sets by Richard Peduzzi, lighting by Dominique Bruguière, and plain modern-dress costumes by Caroline de Vivaise all serve to enhance the somber mood.

Under Esa-Pekka Salonen’s baton, the Met orchestra was magnificent.

Lively ‘Abduction From the Seraglio’ Is Back at the Met

This is not an opera where the audience applauds the set or hums the melodies. Rather, it holds the audiences rapt from beginning to end.

Barry Bassis
Follow
Barry has been a music, theater, and travel writer for over a decade for various publications, including Epoch Times. He is a voting member of the Drama Desk and the Outer Critics Circle, two organizations of theater critics that give awards at the end of each season. He has also been a member of NATJA (North American Travel Journalists Association)
More articles from this author
Album Review of Kristin Chenoweth’s ‘For the Girls’
sharecomments
Album Review:  ‘Into the Fire’
sharecomments
Album Review: ‘Songs from Chicago’
sharecomments