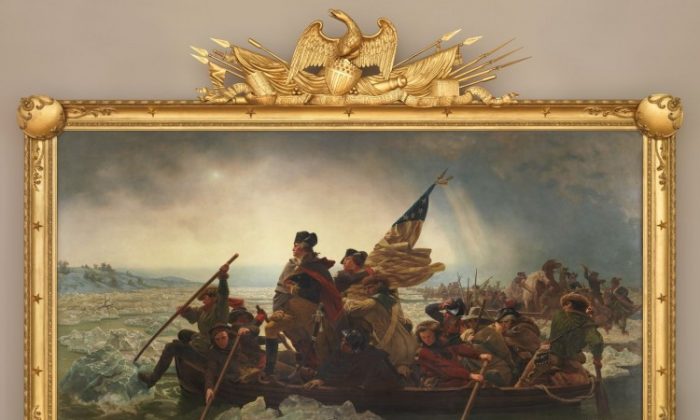 NEW YORK—Earlier this year, the Metropolitan Museum of Art opened the New American Wing Galleries for Paintings, Sculpture, and Decorative Arts after a decade of dedicated work. The renovation of an additional 26 galleries for American art completes the third and final phase of the American Wing renovation project.

The exhibited paintings and sculptures depict the life, struggles, and landscape of early American history. They also exalt the noble character of the human being.

Art, within the scope of its beauty, helps define the culture in which it is created. It is the visual representation of historic introspection, an unintentional discourse on the changes within human nature. Through the arts, we inadvertently hold mirrors up to ourselves.

In his painting “The Sortie Made by the Garrison of Gibraltar,” the artist John Trumbull depicts the sudden attack the British troops made against the Spanish on Nov. 27, 1781, during the American War of Independence.

The Metropolitan Museum of Art’s audio guide explains: “It celebrates the compassion of a Victorian British general and illustrates the gentlemanly behavior of noble officers on opposing sides of a conflict.”

Leaving the Era of the Revolution Gallery and entering the History, Landscape, and National Identity Gallery is akin to leaving one grand world and entering another. Straight ahead is a massive painting titled “Washington Crossing the Delaware,” by Emmanuel Leutze. It measures larger than 12 feet high and 21 feet wide.

It depicts George Washington crossing the Delaware on Christmas night, 1776. After crossing the river, he defeats the Hessian mercenaries at the Battle of Trenton, which becomes his most celebrated victory.

The painting is not historically accurate. According to the audio guide, the boats are actually going in the wrong direction, the ice in the river is depicted as too large, and there is no way the boats could carry artillery and horses.

According to Ushistory.org, a website hosted by the Independence Hall Association of Philadelphia, it was actually night when they crossed the river, and the weather was horrible.

The river is not modeled after the Delaware River but rather after the Rhine River in Germany, where the painting was completed by Leutze. Moreover, the flag depicted is not the actual flag that would have been used at the time.

The objective of the painting, however, is to depict the grandeur of the event. As Secretary of State Hillary Clinton claimed on the occasion of the inauguration of the New American Wing, “I’m well-aware of historical quibbles, but sometimes metaphor and image tell the story even better.”

The painting is indeed well-painted, using the representational techniques of the time. The size of the painting alone is enough to instill awe to the viewer.

One could say that Leutze’s artistic interpretation and story-telling ability is capable of leaving viewers contemplating their own place in history, and it leaves them inspired by what has now become a mythical and iconic part of American history.

Carrie Barratt, associate director for Collections and Administration at the Metropolitan Museum of Art, mentioned how it is necessary to give Leutze the benefit of the doubt. Leutze painted “Washington Crossing the Delaware” 75 years after the event: “He used studio mates and friends to pose for Washington and the men in the boat. …