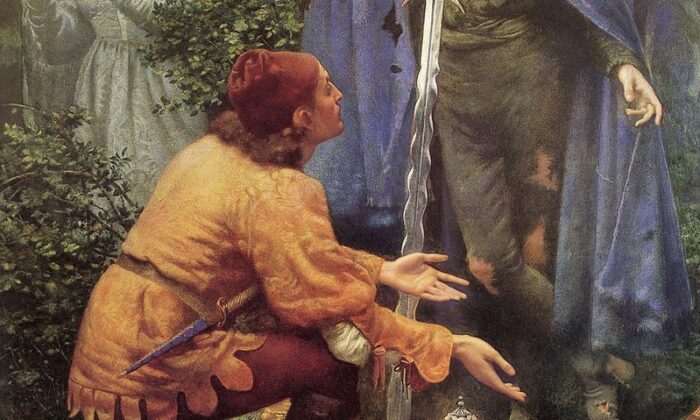 Sometimes, we hold on tightly to the things in our lives. To avoid suffering and hardship, we might think it’s wise to acquire and hoard as much wealth as possible. But in reality, by focusing on what we lack, or fear we lack, we might cause ourselves many sleepless nights.

I recently came across a painting by Edward Robert Hughes called “Bertuccio’s Bride,” which displays a grand gesture of willing sacrifice. According to the story of Bertuccio, great wisdom resides in charitable and joyful giving.

The Story of Bertuccio

The story of Bertuccio is told in “The Nights of Straparola” by Giovanni Francesco Straparola, who was a writer during the Italian Renaissance. In order to take a close look at Hughes’s painting, we must first know Bertuccio’s story.

Bertuccio and the Murdered Man
Bertuccio took the money and went on his way. He happened upon a murderous thief who was beating the dead body of a man he had robbed and killed. Bertuccio intervened and offered to pay the thief for the dead man’s body. The thief agreed to give up the body for 80 ducats. Bertuccio took the body to a church and offered up his remaining 20 ducats to have the body properly buried.

After he returned home, his mother asked him what he had done with his money, and Bertuccio explained how he had used it. His mother became upset with him. Bertuccio, however, feeling that he had done the right thing, remained joyful despite her anger.

Bertuccio and the Princess
Soon, Bertuccio asked his mother for the last 200 ducats of his inheritance. His mother, lacking confidence in him and reluctant, angrily told him to take his money and never come back home again. Undaunted, he consoled her and told her that he would do well with the money this time.

Bertuccio set off on his way again and saw two soldiers fighting over a girl they had captured. Bertuccio again intervened and told the soldiers that he would buy the girl’s freedom for 200 ducats. The two soldiers agreed and split the money between themselves.

Bertuccio took the girl to his home to meet his mother. He told her that he spent his 200 ducats for the girl’s freedom and that now the girl and his mother could become friends. Of course, his mother was very angry and even wished him dead. She believed that he would one day ruin their family. However, again Bertuccio did not let her words anger him and instead tried to comfort her.

The Wedding and Bertuccio’s Sacrifice
Bertuccio and his mother did not know that the young girl was Princess Tarquinia, daughter of the king of Novarra. The distressed king sent soldiers to find his missing daughter. They found her at Bertuccio’s house, and Bertuccio happily wished her well as she left with the soldiers. Before Tarquinia left Bertuccio’s home, however, she told him that when her father allowed her to marry he should come to court and identify himself by putting his right hand to his head. Bertuccio agreed.

Soon the king announced that Tarquinia was to be married, and suitors from all around journeyed to court to claim the princess’s hand in marriage. Bertuccio immediately hopped on his old, thin horse and rode to court. On the way, he ran into a wealthy nobleman, who asked Bertuccio where he was headed. Bertuccio told the nobleman the whole story. Upon hearing the story, the nobleman threatened to take Bertuccio’s place as a suitor.

Unperturbed, Bertuccio encouraged the nobleman to go to court and wished him good luck in winning the princess’s affection. The nobleman, surprised at this response, instead decided to take a chance and give Bertuccio his new horse and clothes as long as Bertuccio agreed to give the nobleman half of the gifts he received from the king. Bertuccio agreed, and he headed to court.

Bertuccio’s Bride
The new horse and clothes made Bertuccio stand out among the other suitors at court. When the time was right, Bertuccio made the signal with his hand, and Tarquinia chose him to be her husband. The couple were happily married.

On the way back to Bertuccio’s house, however, the newlyweds ran into the nobleman. The nobleman asked for his reward, and Bertuccio willingly offered half of everything he had received. The nobleman, however, asked about dividing Tarquinia. Should they cut her in half? Bertuccio asked the nobleman to take her whole and let her live. He then thanked the nobleman for his kindness before he began his journey again.

The nobleman was greatly impressed by Bertuccio’s selfless character and revealed himself as the spirit of the man murdered by the thief. To repay his kindness and selflessness, the nobleman gave great wealth to Bertuccio, who rode home to his mother. She, in turn, was finally impressed by the riches and the princess.

Hughes’s painting depicts the moment Bertuccio willingly gives half of his riches over to the nobleman. The focal point is Bertuccio, whose warm orange shirt helps him stand out against the cool blues and greens of the background. He kneels on one knee, looks up at the nobleman, and presents the valuable items that occupy the bottom right corner of the composition.

Since they exchanged clothes before Bertuccio made it to court, the nobleman is dressed in Bertuccio’s ragged clothing riddled with holes. The nobleman rests apathetically against a tree. He holds the sword he intends to use to cut the princess in half and looks down at Bertuccio.

At the left, in the background, stands Bertuccio’s new wife, Princess Tarquinia. She watches the event with fear at the idea that she will be cut in half. In the background at the right, the two horses look out at the beautiful landscape.

Straparola’s story can shift our understanding of nobility and wealth. On the surface, all of the characters in the story exist in a world that is lacking. The characters all lack something: The mother lacks a clever son; the dead body is disrespected and lacking proper funeral rights; the princess lacks her freedom; and the king lacks his daughter.

As for the unsavory characters, they not only lack something but also act to take what they want. The soldiers want to kidnap the girl and do so, the thief wants money and kills for it, and the nobleman wants half of Bertuccio’s wealth and suggests cutting the bride in two.

Bertuccio, however, does not exist in the world this way. He does not view the world as lacking  and sees no need to take from it. Instead, he experiences life from a viewpoint of abundance. He wants to give what he has for the benefit of others. Many of the other characters are unhappy, but Bertuccio’s wealth both figuratively and literally comes from his joyful ability to let go of whatever is seemingly his. He is materially and emotionally wealthy because he is unselfish.

Of course, the nobleman will reveal himself to be the spirit of the dead man and seems to be testing Bertuccio to make sure that he is worthy of riches, but this doesn’t take away from the fact that the meek Bertuccio is painted as the wealthy nobleman and the wealthy nobleman—as he plays the role of someone who would cut a person in half—is shown in poor attire and spirits. In other words, the truly wealthy person is the one who gives and not the one who cleverly tries to take.

Bertuccio is shown the moment before he receives more than he gives away. Is Hughes’s painting a reminder that good character is rewarded and that we reap what we sow? Does Bertuccio’s meek posture suggest that his character is the cause of his riches? Is Hughes’s depiction of Bertuccio an illustration of a specific type of nobility: a man meek in worldly pursuits, but noble in selflessness?