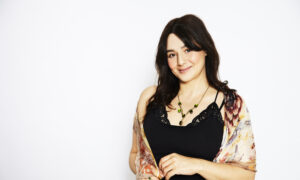 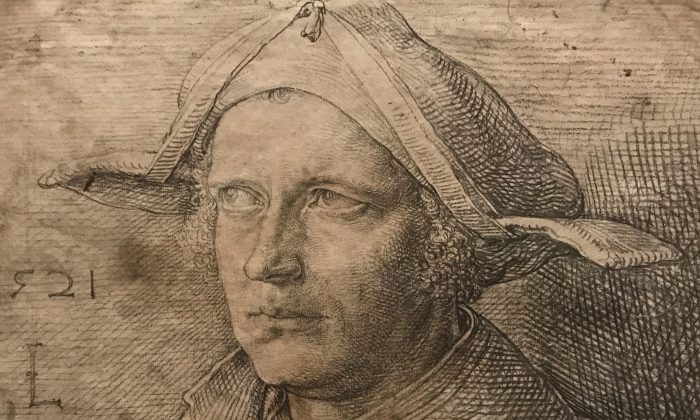 “Portrait of a Man with a Cast in his Eye,” (Detail) 1521, by Lucas van Leiden (circa 1494–1533, The Netherlands). Charcoal and black chalk, with traces of white chalk, Nationalmuseum, Sweden. (Milene Fernandez/Epoch Times)
Arts & Culture

In this column, “The Masters’ Thread” (ept.ms/mastersthread), artists share their thoughts about how masterpieces inspire their current work.

I am trying to understand how to express the engraver’s mark in my drawings. The engraver’s mark is indelible. It’s a permanent statement of intent. The artist has one shot at getting each mark right—it cannot be retracted or erased. This type of mark-making, found in engravings and etchings, can also be applied to any other drawing medium. I think of the engraver’s mark as being more connected to a certain state of mind than to a specific medium. These are marks that indicate bold and instinctive statements.

The Albrecht Dürer drawing “Portrait of a Young Woman with Braided Hair” and the Lucas van Leyden drawing “Portrait of a Man with a Cast in His Eyes” at a Morgan Library & Museum exhibit (“Treasures from the Nationalmuseum of Sweden: The Collections of Count Tessin,” on view until May 14) resonate with me as I have been looking to German and Dutch draftsmen for inspiration lately.

In my recent work, a self-portrait, I attempt to mimic the engraver’s mark by using direct, fluid lines applied with gouache, ink, graphite, and charcoal. The lines of white gouache follow the topography of the illuminated side of my face, giving it a graphic, linear quality. I applied an ink wash with charcoal behind my head to give contrast and tenebrism [a style of painting initiated by Caravaggio]. I expressed the form by using open hatch marks, leaving the exposed paper underneath as halftones. Because this is a multimedia drawing, it has a textural quality, which I intended. This drawing was heavily influenced by Käthe Kollwitz, my favorite German female artist. I made it three months after giving birth to my daughter.

My ink drawing “Eve Sleeping” was created around the same time as my self-portrait. It was made with walnut ink, a nib, and a small brush. I use ink as a medium for drawing, as it challenges me to make bold statements and to live in the moment with each mark. Ink can be hard to control at times, so it has an element of surprise. This makes the process very intriguing to me because of its potential for happy accidents. Yet it leads to many failed attempts.

In his drawing “Portrait of a Young Woman with Braided Hair,” Dürer uses these engraver’s marks to describe her hair, headband, and clothing. The lines are free-flowing and in some places unadulterated by tone. I can see Dürer thinking like a printmaker as he lays down the lines in these particular areas. He leaves the subtler modeling and graining for the forms on her face. I like how he blends tonal gradations with more crude, linear hatch marks. There is a sincere spark of life in her face and a dignified air to her disposition.

In the Lucas van Leyden drawing, we see the printmaker’s mind in full action. Laid in with black chalk and charcoal, the maze of open hatch marks creates a tactility and hardness to the work. The look is very graphic, very bold, and extremely dynamic. He is extracting as much character in this man’s face as his medium can allow. The chiseled marks create a firm and deliberate expression of form.

There is an honesty and directness to how Dürer and Leyden depict these two portraits, as well as an awkwardness I find typical of German figurative art. From Hans Holbein to Adolf von Menzel to Käthe Kollwitz, I find a connection running between representational German artists and the way they see the world. They present an unvarnished view of nature. To me, the German aesthetic is one of rugged honesty. They seem to want to express more of a truth to nature and less of an idealization of the sitter. This is most obvious to me when I compare German portraiture to Italian portraiture during the Renaissance period. I believe the awkwardness is reminiscent of the gothic aesthetic influence, which had such a strong hold over northern European artists from Middle Ages to the Renaissance.

Like Dürer and Kollwitz, I want my self-portrait drawings to be genuine, earthy, and unpretentious. In 2016, during my nine months of pregnancy, I devoted the majority of my artistic energy to self-portrait paintings and drawings. I found myself obsessing over the mark-making of Dürer and Kollwitz. Although 397 years separates these two German artists, they both have a distinct linear style that is commonly found in Germanic art.

The tradition of the printed image has a long history in northern Europe, with the invention of the Gutenberg press in 1440 and with the mass production of images made from woodcuts and engravings. German art comes out of a deep-rooted, linear tradition.

Dürer was the first great artist of the Northern Renaissance to harness the power of the printed image. He was a master woodcutter, engraver, and painter. In the late 1400s and early 1500s, woodcuts and engravings were the most common form of printmaking in northern Germany. Although extremely labor-intensive, woodcuts and engravings allowed the artist to mass-produce an image and thereby spread his name and ideas to a broader audience. For this reason, Dürer was able to reach high levels of fame at a very young age. He also branded his product with a monogram that he placed on all of his prints, drawings, and paintings. Everyone recognized his monogram when they saw it.

Kollwitz was a female German artist born in 1867. She devoted her life to making drawings, etchings, lithographs, woodcuts, and sculptures depicting the profound struggle of working-class Germans during both world wars. The themes in her work range from self-portraits to motherhood to death to poverty. Her work is a mixture of naturalism, symbolism, and expressionism. She achieved international success with her cycles called “The Weavers,” “The Peasant War,” “War,” and “Death.”

As a female artist and as a mother, I feel connected to Kollwitz’s work especially with the tender drawings of her children and her deep sadness after losing her son in World War I.

Although I am not a printmaker, I am using the engraver’s mark to express the power of line in my drawings. I am dabbling in etching at home, but it’s very challenging. To become an etcher is a long-term project, but in the meantime, I am challenging myself with my mark-making in ink drawing and other mediums, and looking to Dürer, Leyden, and Kollwitz for inspiration.

Colleen Barry began her pursuit of mastering figure drawing and painting as a teenager at The Arts Students League of New York and the National Academy School. Later, she studied under Sam Adoquei, Andrea Smith, and Jacob Collins, among others. Colleen also studied in Italy as a recipient of the Newington-Cropsey grant in 2004.  She returned to Italy in 2011 as an affiliated fellow at the American Academy in Rome, with her husband, artist Will St. John. Colleen lives and works in New York City. She sells her work privately out of her studio in Brooklyn, and teaches drawing at the Grand Central Atelier in Long Island City, New York. Her website is ColleenBarryArt.com

Exquisite Art Chosen by a Man of Great Taste