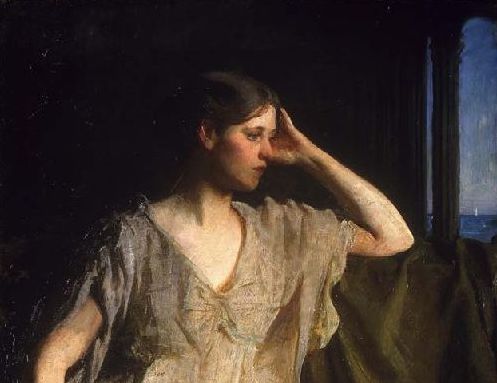 Although many artists, both living and deceased, push us to see and paint differently, there is often one old master who sets up permanent residence in our minds, silently critiquing us and pushing us to improve. Abbott Handerson Thayer (1849–1921) is my greatest source of inspiration.

Thayer was born in Boston, Massachusetts, in 1849. As a child, he was enthralled by nature. He was particularly fond of birds, and even experimented with taxidermy. This passion followed him throughout his life and worked its way into his figurative work. In 1887, Thayer completed “Angel.” The painting features his daughter Mary, standing before a set of wings nailed to a board—Thayer’s way of achieving the illusion of an angelic figure.

Thayer is quoted as saying:

“Doubtless my lifelong passion for birds has helped to incline me to work wings into my pictures; but primarily I have put on wings probably more to symbolize an exalted atmosphere (above the realm of genre painting) where one need not explain the action of the figures.”

Thayer sought to elevate women rather than treat them like objects, a belief that was not fully shared by his contemporaries. Other painters of the time treated the female form like objects in a still life, thus encouraging the public to view them exclusively as sexual beings. He believed that capturing women in this way contributed to their degradation, and used his own work to sway public opinion.

Thayer was steadfast in his defense of women, which is part of the reason I selected him. Beyond his societal influence, I also celebrate Thayer’s graceful style, which he utilized to great effect to capture an emotional connection with his subjects.

In “Woman in Grecian Gown,” Thayer illustrates a woman seated in a room, intimately cropped. You can see just barely in the upper right corner an indication of the sea.

This is a quiet painting, in every sense of the word. Even at a quick glance, it doesn’t take much to imagine what it would be like if you were in that room sitting with the woman. You can hear the wind and smell the sea as the warm glow from (what I imagine to be) a sunrise hits you, just as it’s hitting the woman. Thayer has crafted a believable and romantic setting with nothing more than a dark background, a warm light, and a secret hidden within the woman’s expression.

Thayer’s angel paintings are emotionally rich and the embodiment of his desire to elevate women out of the commonplace. With “Woman in Grecian Gown,” you can see this same concept manifested in a different way. There are no wings elevating this woman, but her expression transcends. Thayer uses the woman’s expression to highlight a depth not usually noticed. The wings glorify the body, while this expression glorifies the mind.

When I work, I think of these elements. How can I convey a strong atmosphere? How can I make the viewer connect with the subject? How do I provide the viewer with just enough so they can glean a story? I want the viewer to be struck by a strong visual impression, but brought in close by a power I see as the inner workings of my subject.

In my painting “Girl with Glass Vase,” I attempt to apply and answer these questions. I want the viewer to be hit first by a strong visual impression, orchestrated through a solid composition of figure placement and the use of a shadow. I hope to hold the viewers’ attention by the girl’s expression, making her feel like a real person with real thoughts.

Far too often, I see work that shows nude women (seemingly) for the sake of nudity. Not only do I find that boring, but see it as a wasted opportunity. Painters should always seek to elevate both themselves and their subject. Thayer is a master at this, and an inspiration who will stick with me throughout my career.

Jennifer Gennari is a classically trained figurative artist. She graduated in 2005 from Ringling College of Art and Design, and in 2008 left for Italy to study at the Florence Academy of Art, where she spent three years studying classical realism under Daniel Graves. She teaches at the National Academy Museum and School and instructs students privately from her studio in Greenpoint, Brooklyn. Gennari’s work has been shown internationally and has received multiple awards and honors.