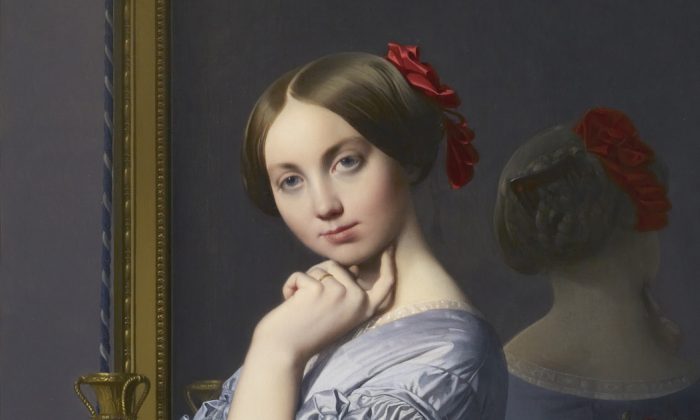 Jean-Auguste-Dominique Ingres (1780–1867) is a hero of mine. His portrait of Louise de Broglie, Comtesse d’Haussonville, hanging in The Frick Collection museum, has always had a particularly potent effect on me. Why is it that I continually respond so deeply to this painting? Why is it continually in the back of my mind when I work?

The portrait fascinates me on several levels. It is virtuosic in technique. The formal qualities of the picture are brilliantly designed and immaculately executed. Ingres went through several years of planning out the portrait in numerous drawings and studies. The countess is elegantly posed in the intimate setting of her boudoir, yet in a formal way. Ingres employs a subtle lighting scheme to highlight the subject’s luminous figure. Through controlled values and tones, he is able to subdue the intricately complex world she inhabits. Noting every detail with remarkable visual acuity, Ingres revels in the chilly elegance of her material world. The blue silk dress is a visual symphony of texture and tone. The countess was a prominent French aristocrat, and Ingres has given her a monumentality redolent of the Second Empire.

What makes Ingres’s painting technique so fascinating to me, is the enormous battle waged in his work between realism and idealism. The grand simplicity of the countess’s figure is contrasted by the intricate detail of the world she inhabits. This dialectic haunts me when I paint: How much should I conceptualize and idealize? How much should I invest in minute observations of the natural world? Ingres manages to give coherent expression to both urges in a single picture.

I’m also captivated by the subject of the painting and its psychological drama. Who is this enigmatic, self-possessed woman who engages us so directly? The countess’s cool and dispassionate gaze is adroitly offset by a curiously inviting smile. Her ambivalence is a construct of the artist, achieved here with remarkable effect. I visit the countess often in an effort to understand the meaning of her gaze. What is it I may have said or done to inspire such a look from this formidable Parisian? I doubt I’ll ever know.

I have come to appreciate Ingres’s passion for art history and his ability to borrow from different epochs. He was the director of the French Academy in Rome from 1835 to 1841, during which time he absorbed the aesthetics of antique sculpture and Italian Renaissance painting. I believe that the smooth, cylindrical quality of his figures comes from his deep interest in Greek and Roman statues, such as the Capitoline Venus. The countess’s right arm was most certainly borrowed from Titian’s “Venus of Urbino.” Not to mention that Ingres’s style of drawing, with its emphatic, curving contours, was heavily influenced by Raphael. The countess’s graceful neckline could have been plucked from any number of Raphael’s portraits.

I love how Ingres sows these influences into a very personal expression of his own. In my practice, I find paintings and sculptures from the past to be an endless source of inspiration. I often leave galleries and museums bursting with pictorial ideas.

In my own portraiture, I aim to not only capture my subjects’ likeness, but to give them depth and complexity of thought. In my portrait of the sculptress Abigail Tulis, I decided upon a frontal pose with a slight tilt to her head. Abigail engages the viewer with a dispassionate glance. The setting is meant to be a both intimate and formal. We’ve happened upon her while she is sketching. Much of this I must admit I have borrowed from Ingres.

I am continually humbled by the sheer, technical virtuosity of Ingres’s portraits. He cared deeply about his pictures and was extremely patient in his painting process. Holding himself to the highest standards, he saw his visions through, without compromise. His degree of finish is astonishing and one of the great achievements in art. I return to his work repeatedly in an effort to improve my own.

The “Comtesse d’Haussonville” is really about Ingres’s passion for painting and his love of female beauty. Ingres poses the question of the goals of art in surprisingly straightforward terms. The countess asks us: “The natural world is a sumptuous place, is it not? Of what use is this beauty of mine? For what purpose?” For the artist, it is for art’s sake.

Brendan Johnston, born in New York City, is a painter and sculptor dedicated to reviving traditional fine art. Johnson is a resident artist and teacher at the Grand Central Atelier. He is currently creating dynamic paintings in many genres. His work is represented by galleries in California, New York, and Massachusetts.