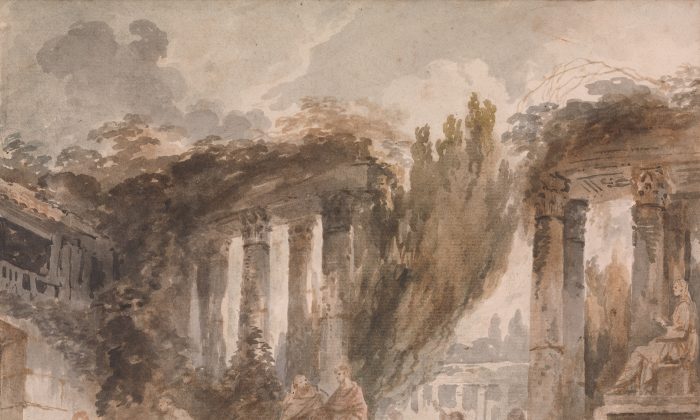 "Capriccio: Excavation of Roman Ruins," circa 1760-62, by Jean Honoré Fragonard (French, Grasse 1732–1806 Paris). Brush and brown and gray wash and watercolor over black chalk on antique laid paper, 10 5/16 by 12 5/16 inches. Private collection (Courtesy of The Metropolitan Museum of Art). On view at The Met Fifth Avenue in Gallery 691.
Arts & Culture

In this column, “The Masters’ Thread,” artists share their thoughts about how one master’s piece inspires their current work.

This watercolor by Jean Honoré Fragonard (1732–1806), “Capriccio: Excavation of Roman Ruins,” on view at The Met, is an exquisite example of draftsmanship. The imaginary scene is set alongside the remains of a temple, with a curved entablature and Corinthian columns.

I was initially drawn by its strong graphic impact and striking contrast. From a distance, I can see a full range of values—the varied warm and cool hues that Fragonard used to design this composition. I notice how often the dark accents appear and also where the warm and cool hues best contribute to the overall effect of the picture. He reserved the warmest hues for the foreground and the coolest for the background, as is often the case.

As I look closer, my attention is first led by the large branches in the center that twist upwards and around the curved entablature, mingling and dancing among the clouds before toppling to the scene below, like overgrown vines upon a crumbling trellis. This sense of movement continues with the bare-chested workers kicking up dust, adding a glow to the ruins in the foreground.

These are clever pictorial tricks Fragonard used to add contrast and clarity to an important part of this picture. The Roman ruins are well-defined, letting the viewer know this is a scene celebrating the ancient world.

As I work in my studio, I keep in mind that the design and composition of a picture should be clear to the viewer both from a distance and up close. It should have a sense of movement and direction and intent. I’m inspired by how Fragonard’s endless study of nature allowed him to effortlessly meet these criteria and contributed to his artistic sensibility.

The “Fragonard: Drawing Triumphant” exhibition at The Metropolitan Museum of Art on Fifth Avenue continues until Jan. 8, 2017.