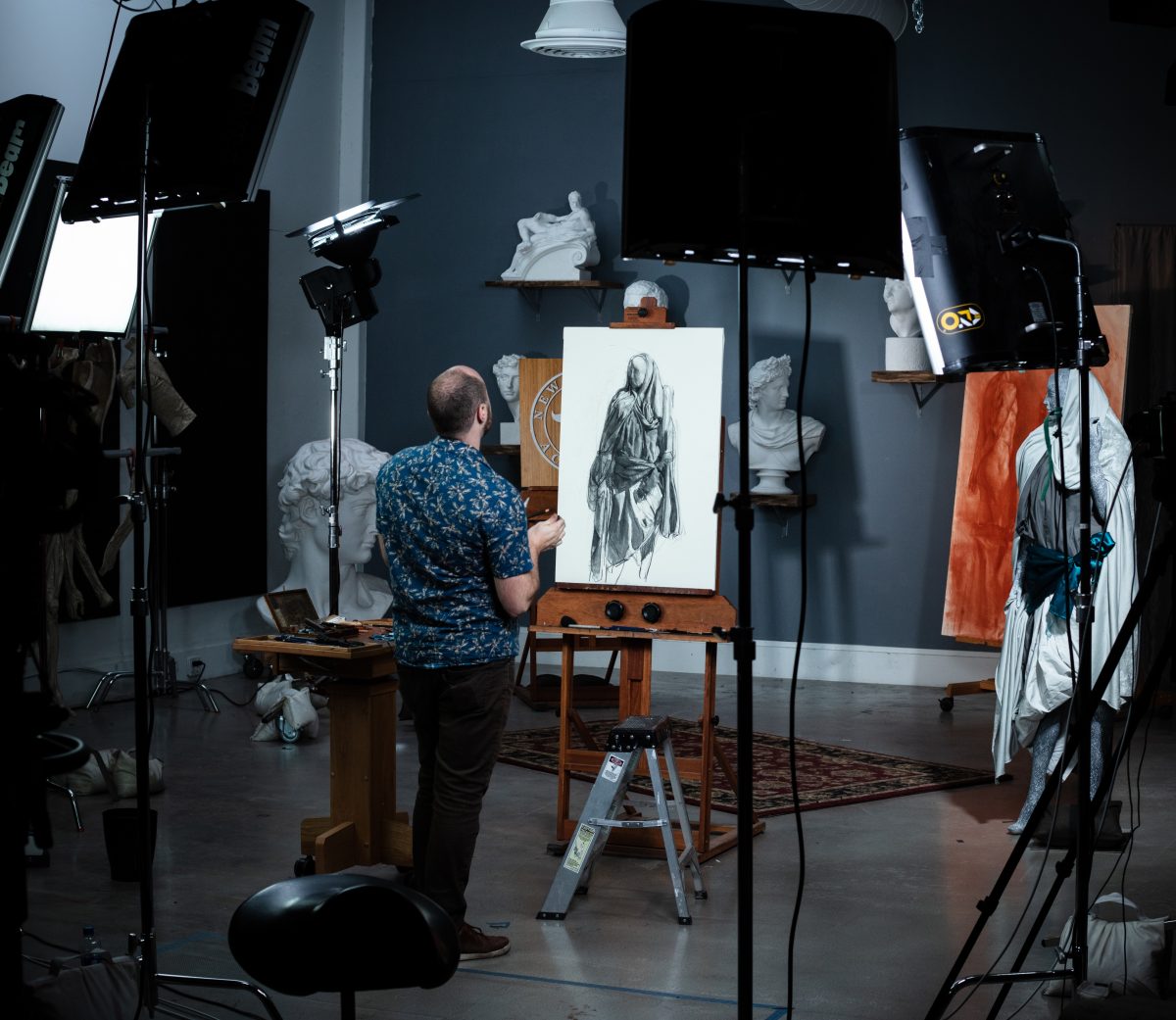 The Mastermind and Heart Behind the New Masters Academy

I wanted to understand exactly how and why the internet’s subscription-based art education website is making this ambitious assertion.

I had an opportunity to tour the impressive film and sculpture studio facilities in Huntington Beach, where the art demonstrations are filmed and edited, and to meet the company’s founder, Joshua Jacobo, in his home, where I learned more about the mastermind behind New Masters Academy (NMA).

His home, which he shares with his wife, Austrian sculptor Johanna Schwaiger, have shelves lined with a notable collection of art books that rivals the library at my prestigious East Coast art school. But then again, that’s at the core of what Jacobo and NMA are doing: challenging the present art school paradigm.

What New Masters Academy Aims to Do

NMA is challenging the paradigm in both form and content.

“Our goal is to offer the world’s most affordable, most comprehensive art education and to get it in the hands of anyone who wants to learn the craft of drawing, painting, or sculpture,” Jacobo said in a follow-up email interview.

He wants “to empower artists from many different backgrounds with many different stories to tell with a solid education of art fundamentals as well as a historical context for how these crafts have evolved.”

Learning art history is important. Just as scientists “stand on the shoulders of giants” who preceded them, artists should learn from the art and masters of the past, he believes, in order to move beyond the artistic nihilism and obscurantism of our day. In this way, we can move art forward.

By returning to the “humility and discipline of our craft, we can create the almost magic and sacred experience in the minds of our viewers once again,” he said.

Though his childhood was filled with the wonder of creativity, Jacobo took many years to come to this craft, career, and mission. It happened in a circuitous manner, befitting a hero’s journey.

“My mother taught my brother and me how to draw at an early age. She would decorate our rooms with murals of dinosaurs, jungles, circuses, or whatever our particular fascination was at the time. She showed us how drawing could be used to connect our imaginations with the real world,” he explained.

But life took a sharp and traumatic detour when, at 20, while studying at a Los Angeles university, Jacobo learned that his mother and stepfather had been killed in an auto accident. This catapulted his life in unexpected ways.

Within mere weeks of the accident, Jacobo started working to pay rent and legal bills. He put any and all of his skills toward earning money and gathering skills and experience that would later prove invaluable to his future endeavors: He worked as a designer, copywriter, salesperson, software developer, videographer, photographer, and anything else he could, to try to make ends meet.

After almost a decade of living a responsible adult life, and with the attainment of some financial security and a range of professional experience, his feeling of panic and survival started to dissipate.

But the call to create—to engage in the mysterious activity of observing, extracting, and recording the relationship between truth and beauty—did not abate.

He began to draw again, only part-time at first. But as he regained stability and financial security, Jacobo felt that, if he was serious about pursuing art for a lifetime, it was time to study it full-time.

“I had fantasies about creating masterpieces that rivaled those of the old masters. I felt I had aptitude and talent and only needed the right training,” he said.

The search to learn how to paint and draw like the master draftsmen of the Renaissance, however, proved more difficult than he imagined.

Jacobo’s quest became the impetus that set him on his path.

The Search for an Art School

“While I was aware that the skill of artists today paled in comparison to the great masters of the past, I assumed that serious artistic training still existed in the world,” Jacobo said.

He was willing to move to wherever a school could be found and pay whatever was needed.

Jacobo spent a year researching university art programs, specialty schools, and ateliers around the world to find the perfect fit. He was shocked, however, to discover that most of the fundamentals of the craft of drawing, painting, and sculpture were no longer being taught.

“Something had happened to art training, and art itself, and I struggled to piece together the enormity of this disaster,” said Jacobo, contextualizing the state of art within the frame of Western history.

He learned that the 20th century had seen a radical shift in culture, so dramatically altering the visual arts that figure painting was proclaimed dead, painting irrelevant in some countries, and the craft aspect of it had become separated from the “effable notion of ‘art.’”

Traditional art was replaced by the “highly subjective, infinitely inscrutable, and quite lucrative for a select few,” he said.

He hadn’t realized that art had been “liberated” from “the authoritarian, nationalistic, bourgeois, power structures that had apparently so oppressed it.”

“The newly liberated artists … dispensed with restrictions like drawing fundamentals, humility, and a collective sense of artistic tradition in favor of individual expression, originality of style, and above all, the edgy concept. Beauty had become kitsch, and mastery of craft irrelevant.”

So rather than enrolling in a deficient or misguided art program, Jacobo decided to teach himself, laying out a self-imposed training regimen of copying masters, studying anatomy, and drawing from the imagination, practices he continues daily and that he thinks are vital.

He purchased a four-volume set of beautiful reproductions of the corpus of Michelangelo’s drawings from the master’s home, now a museum called Casa Buonorotti, in Florence, and began the exercises given to apprentices for hundreds of years: painstakingly copying hundreds of the master’s works.

Finding a Teacher and a Mission

Recently, there is a revival of academic representational art being taught in ateliers in the United States and Europe.

Of these few artists that Jacobo found who were versed in the craft of drawing and painting, one stood out to him—Glenn Vilppu.

“Learning about Glenn from another artist, I was astounded when I first saw his drawings. Here was a living person who could really draw like the old masters.”

Vilppu, then in his 70s, was a drawing teacher who had studied with some of the best draftspeople of this generation and had taught for nearly 50 years in schools, and later worked in the animation industry. He traveled the world giving workshops and selling a wide variety of self-published books and videos on his technique: an approach to drawing with an emphasis on gesture—the visual movement that ties together nature, design, and inventiveness.

“I had no choice but to hunt him down and demand that he teach me, perhaps having watched too many kung fu movies as a kid,” Jacobo joked.

But it worked, and what transpired became a mutually beneficial relationship, both professionally and personally. It would also become the genesis of the New Master Academy.

With real-world professional and technical experience, Jacobo offered to help Vilppu’s art business in exchange for the opportunity to study with Vilppu one-on-one.

Jacobo suggested that Vilppu take his business online to reach the maximum number of art students around the world, as both agreed that what was needed was a return to traditional foundational training.

As a result, the new, small, online school called the Vilppu Academy transformed Vilppu’s business, “winning awards and getting great buzz from the art community.”

With this success and the desire to reach more people, Jacobo thought: “What if there was an online art school that functioned like a modern subscription site such as Netflix. Instead of one master artist, what if there were dozens, each providing expert training on a range of art subjects from anatomy, perspective, painting technique, creature design, the portrait, and, of course, the figure?”

At first, the content was recorded in the garage of Jacobo’s Newport Coast home, but eventually, they rented a studio space in Huntington Beach.

The website went live in March of 2013 with about 100 hours of content in the library, with thousands of beautiful reference images of art models in portraits and dynamic poses.

They developed the world’s first 3D-art reference viewer. It allows artists to study scans of people and of master sculptures as well as references to anatomy. Artists can then transfer the real measurements from the web app to their own work.

The comprehensive resources offered on the website are nothing short of remarkable.

Since 2013, the website has grown to include over 1,000 hours of content from over 20 instructors, including Juliette Aristides, John Asaro, Mark Westermoe, David Simon, Johanna Schwaiger, and Rey Bustos.

It turns out that there were many others around the world who, like Jacobo, were dissatisfied with the educational options available. Over a million people follow their network, and tens of thousands around the globe study with their program.

“We started seeing the influence of our instruction early on. The quality of work being produced and shared online on art forums, Facebook, or Instagram was improving, and many artists were crediting us with their changes of understanding and thinking, some of them quite influential and well-subscribed,” he said.

Universities, film and game studios, and other professionals contacted NMA, and soon the website was being used to train artists at Disney Animation Studios and art departments globally.

“My decision to pursue my love for art as a full-time career was the best one I ever made,” Jacobo said. “I am healthier, happier, and I have found the woman of my dreams in my wife, all as a result of taking the plunge and betting on the risky world of art and art education,” he said.

Looking Toward the Future

This year, NMA will add the world’s most comprehensive landscape painting courses to its website, and many international artists from China, Russia, and Europe have been invited to film their traditional cultural arts—from Tyrolean wood carving to traditional Chinese ink painting.

Also underway are an artist store, an art news section called Canvas, and an original program for children (think “Mr. Rogers’ Neighborhood” meets Bob Ross) that teaches art fundamentals as well as life lessons and values, such as the power of creativity and how to find beauty in the world around us.

“What I love most about art is its ability to connect us with our intrinsic nobility and love for each other and for nature,” Jacopo said. “I love how great art can inspire, challenge, and comfort us. I believe art can elevate us, that it is anything but useless. In some respects, our artistic creations represent the best of our natures.”

“We can make our society better, and despite new challenges and crushing setbacks, I think that we are succeeding,” he said.

So it seems that New Masters Academy is changing the art world, one brush stroke at a time.