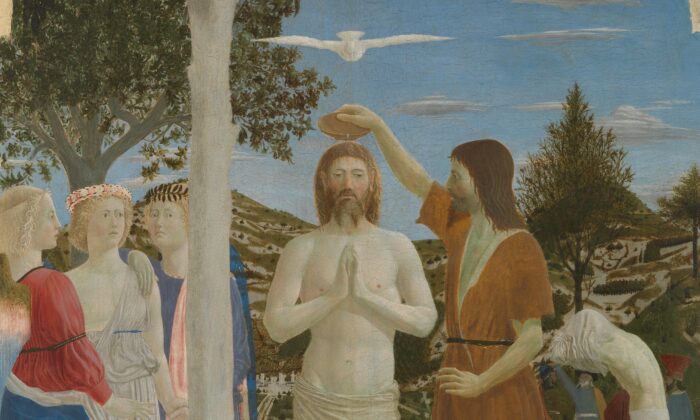 The Marriage of Mathematics and Sacred Art: Piero della Francesca’s ‘The Baptism of Christ’

“We don’t go to art for information. Rather it’s the experience.”—Roger Scruton, philosopher

Piero della Francesca’s “The Baptism of Christ,” which hangs in the National Gallery in London’s Trafalgar Square, was rather like a personal shrine to me. I visited it frequently “for the experience.”

When the newsroom became too much of a gallimaufry, I would jump on the Tube to the National Gallery. Ten minutes later I would stand and stare at the painting. A soothing quiet would course through my veins. The painting was reminder, like that hymn by the Quaker John Greenleaf Whittier:

“Drop Thy still dews of quietness…all our strivings cease;
Take from our souls the strain and stress…let our ordered lives confess the beauty of Thy peace.”

A Man of Genius

Piero della Francesca, originally named Piero di Benedetto, was an Italian painter of the Early Renaissance. Although his towering talent was immediately obvious, his peers thought he was as gifted in mathematics and geometry. Why, without Piero they wouldn’t have even heard of Euclid.

Born in 1415 in Sansepolcro, Piero died in his birth town in 1492.  He was the son of a merchant and tanner. His life was one of wealth and prestige.

He wrote three treatises which have survived to the present day: “Trattato d’Abaco” (Abacus Treatise), “Libellus de Quinque Corporibus Regularibus” (”Short Book on the Five Regular Solids”) and “De Prospectiva pingendi” (“On Perspective in Painting”). The subjects covered in these writings include arithmetic, algebra, geometry, and innovative work in perspective.

‘The Baptism of Christ’

“The Baptism of Christ” was commissioned for a small church in Piero’s home town of Sansepolcro in Tuscany, Italy. The tempera on panel which measures 66 by 46 inches is the earliest surviving work of the 15th-century painter.

In tempera, egg is used, which has been diluted with water. Dry pigments are ground into the viscous medium. The speed at which the egg dries causes unexpected changes in tonality. More than one layer of retouching is required to obtain the desired effect. Unlike painting with oils, egg tempera is extremely unforgiving.

That Piero started this profoundly cerebral painting when he was only 20 years old speaks to his genius.

Uniting Viewers With the Scene

The painting depicts the moment when Christ is baptized by his cousin. John is gently pouring water from a bowl on Christ’s head while angels watch on.

Christ’s baptism seems to not be in the Holy Land but in the moment. With Piero every allusion matters; the image is a distillation of the thing depicted. His world and Christ’s world are not separate.

The River Jordan is a local stream in which the reflection of a patchwork of Tuscan hills is seen. The blond tree echoing Christ’s body is an Italian walnut tree. There are seven plants which are painstakingly rendered. All are indigenous to the area. It is a landscape that is particularly Sansepolcro. In fact, one is even the indigo plant which Piero used for his paintings.

Piero has used the local landscape to unite the viewers to this moment in history.

Piero’s painting is characterized by its serene humanism, its use of geometric forms, and perspective.

The trio of angels seemingly have human relationships with each other. One angel puts his arm on his companion’s shoulders so that he can see better. Another looks a tad perturbed.

Christ’s body forms a vertical in the center of the painting. Above his head is a bowl and the dove. This line of symmetry leads our eye to heaven.

Balancing the emphasis on the vertical, a horizontal line divides the painting: from the belts of the angels and John the Baptist to the man in the middle distance taking his shirt off in readiness to be baptized.

Behind the man taking off his shirt, and adding perspective, are smaller, stranger figures wearing hats that would have identified them as being Greek. Scholars remain puzzled as to their identity. Some think they could be the Magi.

The continuing arch of the top of the painting around through the curved top of Christ’s loincloth form part of a perfect circle.

Moreover, the cool clear light unites everything. Piero’s palette is milky blond, but each color is a clear as notes that are perfectly played.

His spacious, monumental and impossibly rational painting is undoubtedly one of the highest achievements of the artistic ideals of the early Renaissance, an age in which art and science were bound together very deeply.