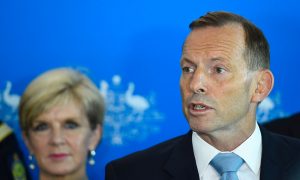 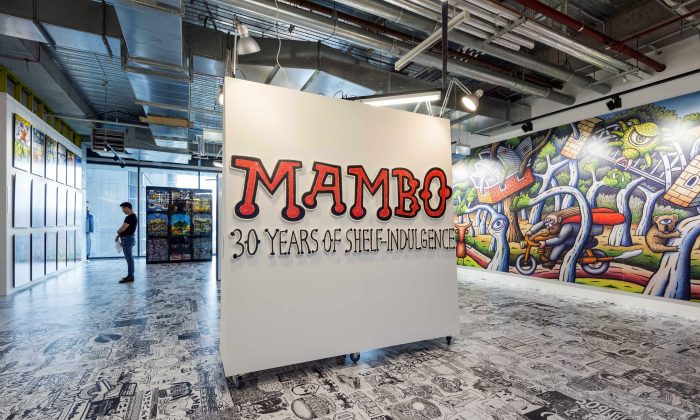 The entrance to the Mambo exhibition at aMBUSH GALLERY. In the background is part of the "Millennial Wallscape" a Reg Mombassa mural commissioned to celebrate the recent 40th anniversary of the Sydney Opera House. It was painted on a construction hoarding for a building site in the Opera House's southern forecourt. (Courtesy of aMBUSH Gallery)
Art Marketplace

The Man Behind Reg Mombassa

SYDNEY—All artists are nutcases, beggars and addicts, but they are also minor deities says Reg Mombassa.

In true form Mombassa, the iconic artist most seen in larrikin surf wear company Mambo, is outrageous, irreverent and provocative, but on meeting him under his real name Chris O’Doherty, he is softly spoken, thoughtful and self-effacing.

Artists have to rely on others to buy their works for a living, he said by way of explanation. They are addicted to the creative process and live on the fringe of conformity … and the minor deity?

“The only true gods on Earth are artists, because they create beautiful things from nothing,” he says with a wry grin.

New Zealand born O’Doherty, could have been called any number of whacky names, including “Dorky Bladder”, when he was deciding on a pseudonym as a founder and member of popular 80’s rock band Mental As Anything. Instead he chose Reg Mombassa, a juxtaposition of earthy truck driver and left field exotic—and it stuck.

To close friends he remains Chris, but to just about everyone else, including those we come across as we walk around the Mambo exhibition in the newly opened aMBUSH Gallery in Sydney, he is Reg.

“Mambo: 30 Years of Shelf-Indulgence” includes T-shirts, surfboards, posters and even sculptures from some of the 250 artists who contributed to the label, but it is Reg Mombassa whose works dominate.

His art is now a part of the Australian landscape, represented in major galleries and events. Under the moniker Reg Mombassa he was commissioned to produce designs for the athletes’ uniforms and artworks for the Closing Ceremony of the 2000 Sydney Olympics. He was also appointed artistic director for Sydney’s 2013 New Year’s Eve celebrations, producing banners, lights and a massive eye, which glowed from the Sydney Harbour Bridge throughout the fireworks display.

Interested in graphics and comic book art as a young boy growing up in New Zealand, and a graduate of the National Art School in Sydney, Mambo was the perfect creative vehicle for O’Doherty.

“It was very energetic, lots of interesting artists and good people to work with,” he said. Most importantly it was also creatively free in terms of producing work.

“There were no guidelines, no direction,” he recalled, “That’s why I liked it!”

Every person wearing a T-shirt is a miniature ambulatory art gallery.
— Reg Mombassa
Although O’Doherty concedes that he also likes the quiet intensity of gallery space, the canvas Mambo artists used was unconventional—T-shirts, surf boards and posters.

“Every person wearing a T-shirt is a miniature ambulatory art gallery,” he says with a twinkle in his eye.

His images were wild and provocative, suited to the carefree surfing culture, but also extending beyond what was often a narrow world view. His creative process involved a lot of “free association”.

“I would get a lot of reading materials; magazines, maybe a magazine about muscle men, a magazine about dogs and another one about earth moving equipment; books about tribal art or Mexican street art, or a book about Australian logos from the 19th century; anything, just interesting visual stuff really; and then add cave paintings, and then you just mix it up or come up with associations, or weird visual puns or circular puns,” he said.

For a particular range he would produce from 50 to 100 small drawings from which the art team would make a selection.

Ideas were not something that O’Doherty was short of either. Mambo enabled him to explore his passion for conceptual art and the big issues.

Religion, a big part of his childhood in New Zealand, features strongly in his work. His kindly Australian Jesus, with long hair and cape, appears in all manner of places: riding a motor bike, distributing pies and beer at the football, or reading the Book of Reg to koalas and kangaroos.

He confessed that the image made him feel uneasy at first. “It is hard to get over that sort of cultural conditioning.” He also concedes that religion is a comfort for many people, but believes it is important to examine.

“It has done some terrible things,” he said.

The oppression of women and an overbearing male culture are also pet issues.

“I have always been sort of anti-authoritarian—that whole alpha male leadership in a rigid hierarchy,” he said. “I am highly suspicious of that sort of thing.”

He points to one of his famous images, the rather robotic man who has two penises and is depicted waving hands full of military arsenal.

“That sort of male obsession with the size of the penis or how many you have. Ridiculous things humans do that strike me as odd,” he said.

The “maggot infested business horse” is another favourite image.

Based on a photograph of a dead horse used by artist Sydney Nolan, O’Doherty’s image “is a thinly veiled go at overly-zealous, aggressive, ruthless business practices”.

“The horse is rotting dead, it’s got maggots coming out of it and it is still cheerily smoking cigars and planning new smelters.

It is his fascination with suburban landscapes, however, the humble fibro house ever present in various slightly disconcerting settings that remains the most significant and consistent feature of his art.

“To me that is our ancestral dreaming, because the people in this part of the world, we don’t have a real connection to the land or history here,” he explained.

Much of his recent artwork is drawn from road trips, shots and glimpses seen from the car. Even the F3 motorway is a feature: “I think it is a major sculpture,” he says.

When not playing in his band Dog Trumpet and not fulfilling demands for his quirky artworks, Chris O’Doherty is focused on landscape painting and drawing. Influenced by the modern movements, including Impressionism, Fauvism and Expressionism, his works are in demand and he is in preparation for an upcoming exhibition at Sydney Watters Gallery.

In the meantime, you can see his work, and that of many other Mambo artists at aMBUSH Gallery, Central Park Sydney until April 26.