The Lightness and Purity of Shen Yun 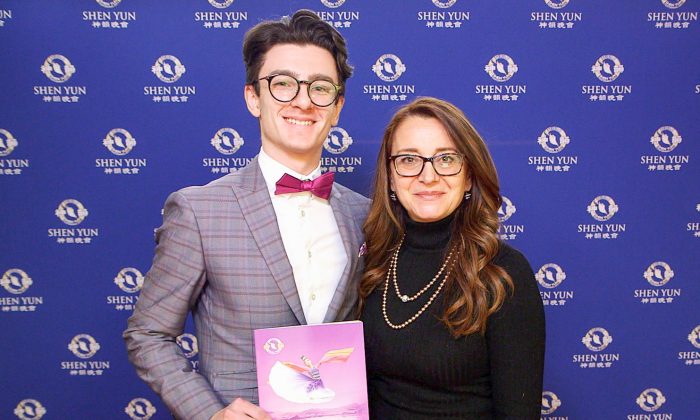 MONTREAL, Canada—It was as if the artists were participating in something greater than themselves. There was no trace of self-consciousness or ego as they practically floated through the dances, transporting the audience back in time and space.

“The artists, they were not focused on themselves. They were really emanating a positive energy,” Fulminis said. “They were smiling as they floated through their movements.”

“It was light—I think that is what I’ll take from it, the lightness,” Fulminis said.

Fulminis is a lover of the performing arts, and though classical Chinese dance might have been a new experience, she appreciated the beauty and purity of the form. It’s a dance system that has been passed down and refined over thousands of years through the dynasties, and one aspect of the divinely inspired Chinese culture that New York-based Shen Yun is trying to revive.

The colors and movements on stage created a unique experience, a palpable energy that Fulminis described.

“It is very energizing, very uplifting. The music and the colors, the way it all came together, it is uplifting. I feel uplifted right now,” Fulminis said.

And through the arts, Fulminis said she realized how close the cultures of the East and West were.

A Shen Yun production includes 20 individual pieces of dance or music soloists, and a good number of the dances have a narrative. Fulminis described some of the stories that moved her, stories where negative elements in the world were turned around by the spirit.

“I identified with that, because of my own spirituality—I was really surprised by that,” Fulminis said.

“I liked the element of magic too,” she said, describing scenes from ancient myths and legends, a world where the everyday world meets the divine. “It was funny but profound. We all have our stories and I didn’t realize—I thought I knew about the Chinese culture—but I realize there is more, much more. Isn’t it exciting!”

Jeremis Iacobacci said he had been surprised by this representation of China as well. We in the West don’t always think of China as a spiritual culture, as the modern state under communist rule has worked for decades to stamp out such traditions. But China was once known as the Celestial Empire, or the Divine Land, because central to its culture was reverence for the divine.

“I was just saying that I think I’m going to go home and look up some of the details of Yi and Mongolia,” he said. “I want to know more about it.”

During the performance, Iacobacci was absorbed and drawn in by the colors. He described his favorites, the complementary and contrasting colors that went together even though it seemed like they shouldn’t, the blue fans that mimicked the effect of water, colors that brought to life cherry blossoms against blue sky and the green of nature. It inspired him.

“That’s something I would probably be drawn to in the future, in order to use it, because I think we should draw away from the blacks and whites and grays,” he said. “There is a natural beauty in that.”

And somehow, the colors came together to create something that seemed real.

“My goodness, it’s alive. It’s alive,” he said. “I found myself smiling as I was watching the numbers, because I really was just drawn into that.”

With reporting by Dongyu Teng and Catherine Yang.