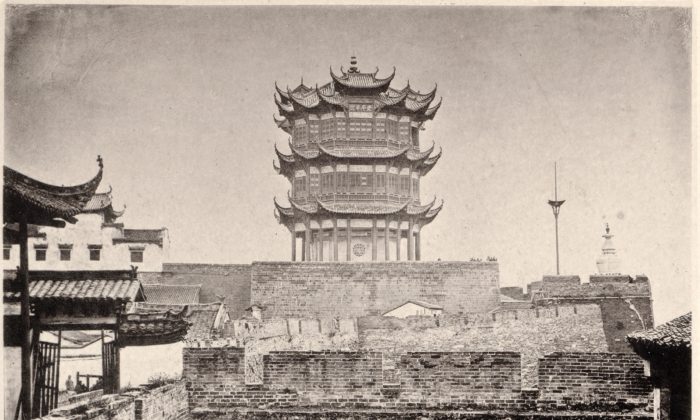 The Yellow Crane Tower in 1871, from "China and Its People" by photographer John Thomson. (Public Domain)
Chinese Culture

The Legend of the Yellow Crane Tower

The Yellow Crane Tower is one of the Four Great Towers in China. It stands along the Yangtze River and overlooks Wuhan City in Hubei Province. Many poets, including Cui Hao and Li Bai, have written famous poems about the tower. Legend has it that the tower was built in honor of a Taoist immortal.

In ancient times, there was a man named Xin who ran a small tavern. One day, a man in ragged clothes came and asked him for a bowl of wine. Mr. Xin did not look down on the man because of his appearance and offered him a large bowl of liquor without charge.

For the next six months, the man came every day and asked for wine. Mr. Xin served him every time without growing impatient.

One day, the man said to Mr. Xin, “I owe you a lot of money for the wine, but I have no money to repay you.” He then took out a piece of orange peel from the basket he was carrying and drew a yellow crane on the wall with the orange peel.

“Just clap your hands when a guest is here, and the crane will dance,” the man said. He then clapped and sang to demonstrate, and the crane indeed came off the wall and danced, following the rhythm.

Over time, Mr. Xin’s tavern became famous for the dancing crane. Many patrons came to witness the miracle, and Mr. Xin made quite a fortune in the following years.

One day, the man returned, again in ragged clothes. Mr. Xin thanked him and offered to support him financially for the rest of his life. The man smiled and said, “That’s not why I came here.” Then he pulled out his flute to play a few tunes. As the man played, the clouds descended from above, and the crane came off the wall and flew toward the clouds. The man rode on the back of the crane, flying toward the heavens.

Mr. Xin was extremely grateful for the man, whom he believed to be a Taoist immortal. In gratitude, Mr. Xin built a tower at the location where the man and the crane ascended. It was named the Yellow Crane Tower.

Long ago one’s gone riding the yellow crane,
all that remained is the Yellow Crane Tower.
Once the yellow crane left it will never return,
for one thousand years the clouds wandered carelessly.
The clear river reflects each Hanyang tree,
fragrant grasses lushly grow on Parrot Island.
At sunset, which direction leads to my hometown?
One could not help feeling melancholy along the misty river.