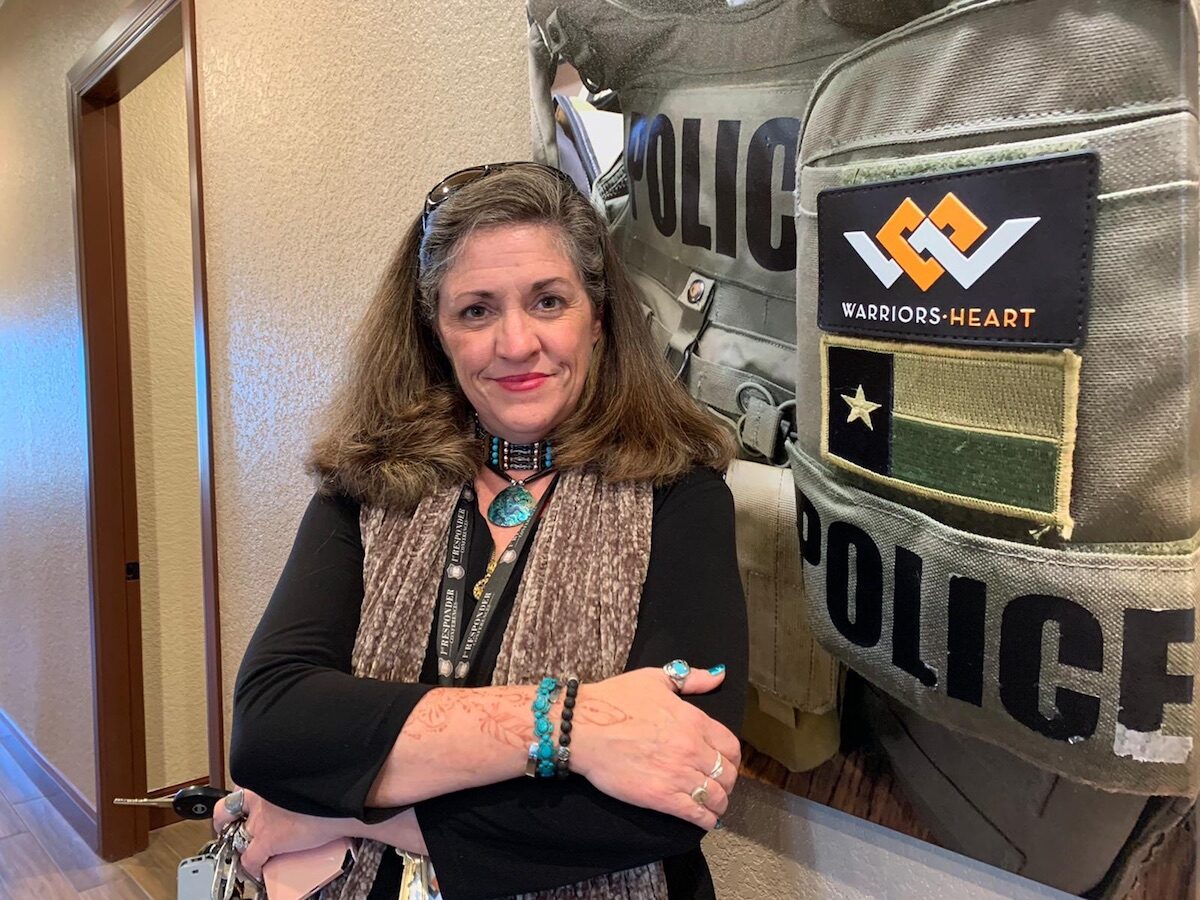 The Last Drink: A Police Officer’s Struggle to Achieve Sobriety

On March 10, 2013, Erika Rose Unberhagen had her last drink. She was on the porch of the house where she had been attending a meeting and was drinking straight out of the bottle. She called 911 on herself and told the operator that she was going to drink herself to death. A few days later, after she was released from the hospital, the former police officer entered a treatment program for the fourth time. She didn’t know at the time, but she would end up as a professional on the other side of the addiction—helping others.

Unberhagen, 49, lives in Bandera, Texas. She grew up under difficult circumstances and pursued a career in law enforcement to show others that they could overcome the circumstances they came from.

She started working at the Bell County jail at 18 and became a police officer when she turned 21. Shortly after working as a reserve officer, she began serving as a full-time officer for the Harker Heights Police Department in 1990.

Unberhagen’s first call as a police officer would leave an indelible mark on her psyche. It would be the beginning of a series of traumatic experiences on the job. She responded to a disturbance call, which turned out to be an officer-involved shooting in which the suspect was fatally shot.

“That’s how I started my career, and I actually had a female officer say, ‘This is do or die. You’re going to stay in this job or this is going to cause you to leave,’ and I chose to stay,” Unberhagen recalled.

During the course of her career, she worked in the juvenile division, and covered everything from stolen bicycles to homicides. One of the more traumatic experiences occurred toward the end of her law enforcement career. As she was called to the scene, she knew exactly who the family was as soon as the address came out over the radio. A father had shot and killed his son and daughter, and then taken his own life.

Unberhagen’s son was about the same age as the deceased boy, which was particularly hard on her. To make matters worse, she was tasked with notifying the mother that her two children had been killed.

At the time, mental health and post-traumatic stress weren’t topics that were discussed, particularly in law enforcement. She began to drink to cope with the stress and the trauma from the job, and her sergeant actually owned a local bar where she and her colleagues would drink and talk about the previous shift.

“The message that was given to me very early on was you work hard you play hard,” Unberhagen said. “That was really the only coping skill I had at the time was drinking.”

At first Unberhagen was drinking heavily to cope, but by the time she was promoted to sergeant she had become a full-blown alcoholic. The trauma she experienced on the job ultimately manifested as post-traumatic stress. She noticed she was suffering from symptoms of insomnia, hypervigilance, and anger. She would drink all night to attempt to fall asleep. She couldn’t tell anyone she was struggling, and to make matters worse she didn’t have any support from her department. Her alcoholism ultimately reached the point where she was often forced to call in sick after drinking all night.

“It had gotten to the point where I couldn’t not drink,” Unberhagen said.

After 15 years, Unberhagen retired from law enforcement. Unberhagen’s husband at the time realized her drinking was getting out of control, and her marriage was suffering as a result. She checked herself into a treatment center, and while she was there she learned her husband had filed for divorce.

After she completed the program, she returned home. Her husband left for a conference the next day, and she got drunk the same night. Both of her children had moved away to live with relatives, she had no job, and was forced to sell her home. She checked herself into a second in-patient treatment center, but the day she got out she was drinking again. She ultimately lost her job and her new home. After a third stint in another treatment center, she continued to drink.

By this time she had been arrested several times for driving while intoxicated, and the first two arrests were by her own department. In fact, the first arrest was made by the officer who she had trained when she was on the job.

“I was that officer that had done really well and had become police officer of the year, and now I couldn’t stay sober. I couldn’t obey the laws that I used to swear to uphold,” Unberhagen said.

Unberhagen continued to drink more and more. At the height of the alcohol abuse, drinking was the first thing she did when she woke up and the last thing she did before she went to sleep.

By now she was homeless and living out of her car. She fled to Louisiana for a year before a man she had a relationship with convinced her to move in with him back in Texas. Once he realized how bad the alcoholism had become, he offered her an ultimatum. She could either get treatment or he would end the relationship. Unberhagen moved into a women’s shelter which had an alcohol treatment program. She finally realized she needed to follow the steps that would lead to her sobriety.

“It was while I was there that I realized I needed to learn how to live again. I had forgotten how to do that,” Unberhagen said.

After she left the shelter she went to a meeting, and her sponsor told her that she had to attend 90 meetings in 90 days to show that she was serious about achieving sobriety. She ultimately ended up going to 127 meetings over three months.

After a year and a half of sobriety, Unberhagen decided to go back to school. She earned her master’s degree in social work, specializing in mental health and substance abuse. During her own struggle, she had not been able to find a meeting or treatment program that specialized in helping first responders like her. When she learned about Warriors Heart, she had found her calling. The organization treats veterans and first responders contending with post-traumatic stress and substance abuse.

“Warriors Heart was everything that I went back to school to do. I knew what my mission was,” Unberhagen said.

When she interviewed for a counseling position at the organization, she was very open about her experience as a police officer and her own struggle with alcoholism. A few days later, she was hired. In the course of her work, she’s been able to connect with first responders who are struggling and works with them to determine the root causes of their addictions. The most rewarding part of her work is seeing a first responder find the will to achieve sobriety.

“That’s what I get from working at Warriors Heart. To see that light come on in their eyes. To see that desire to live again. That’s what will keep me here,” Unberhagen said.