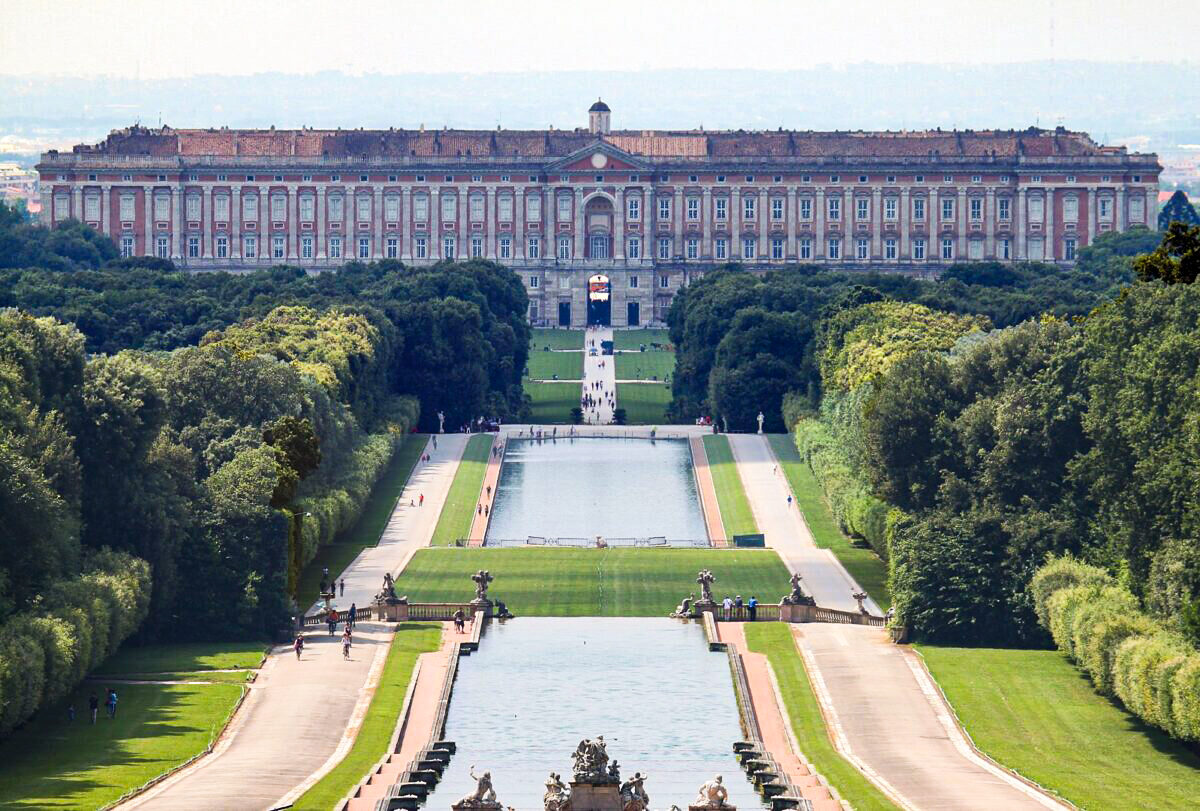 Standing five stories tall and 810 feet wide, the Royal Palace of Caserta is the largest palace by volume in the world. This view of the back side of the palace only hints at the incredible two-mile-long promenade and waterway that stretch vastly across the Italian landscape like a man-made river adorned by impressive fountains and sculptures that are framed by natural forests. (Carlo Pelagalli/CC BY-SA 3.0)
Arts & Tradition

The Largest Royal Palace in the World: Caserta, in Italy

Larger than life: Art that inspires us through the ages
BY Jeff Perkin TIMEMay 16, 2022 PRINT

Standing five stories tall with an incredible 1,200 rooms, Reggia di Caserta, or the Royal Palace of Caserta, is the largest royal palace in the world by volume. Honored as a UNESCO World Heritage site in 1997, the palace was called “the swan song of the spectacular art of the Baroque” as part of its confirmation.

A highlight of Italian Baroque architecture, the otherworldly interiors of the palace were utilized in two “Star Wars” films. The immensely sprawling property encompasses 300 acres with the palace’s floor area making up over a half-million square feet.

Designed by architect Luigi Vanvitelli, the palace is a large rectangular plan with four orthogonal arms which create four inner courtyards. A vaulted arcade connects three octagonal vestibules that lead to the four courtyards. The palace’s lengthy, two-toned Neoclassical façade is a restrained counterpart to the decadently decorated rooms inside; 40 monumental rooms were built to host royalty and their guests for various occasions. These magnificent rooms are covered with eye-catching Baroque ornamentation and a myriad of artistic details from floor to ceiling.

The Royal Palace of Caserta sits below a surreal chain of basins and fountains that are fed by a man-made waterfall in the distance. A truly surreal setting, the Royal Park seems to extend to the end of one’s eyesight. Greenery surrounds the two-mile-long promenade and features many Neoclassical fountains filled with mythologically-significant scenes composed of numerous sculptures.

Built for King Charles of Bourbon in the mid-late 18th century, the Royal Palace of Caserta houses two dozen state apartments, the Palatine Chapel, a large library, many fresco-painted ceilings, and a theater inspired by the Teatro San Carlo of Naples. Despite its enchanting grandeur and scale, it remains to be relatively unknown by name outside of Italy.