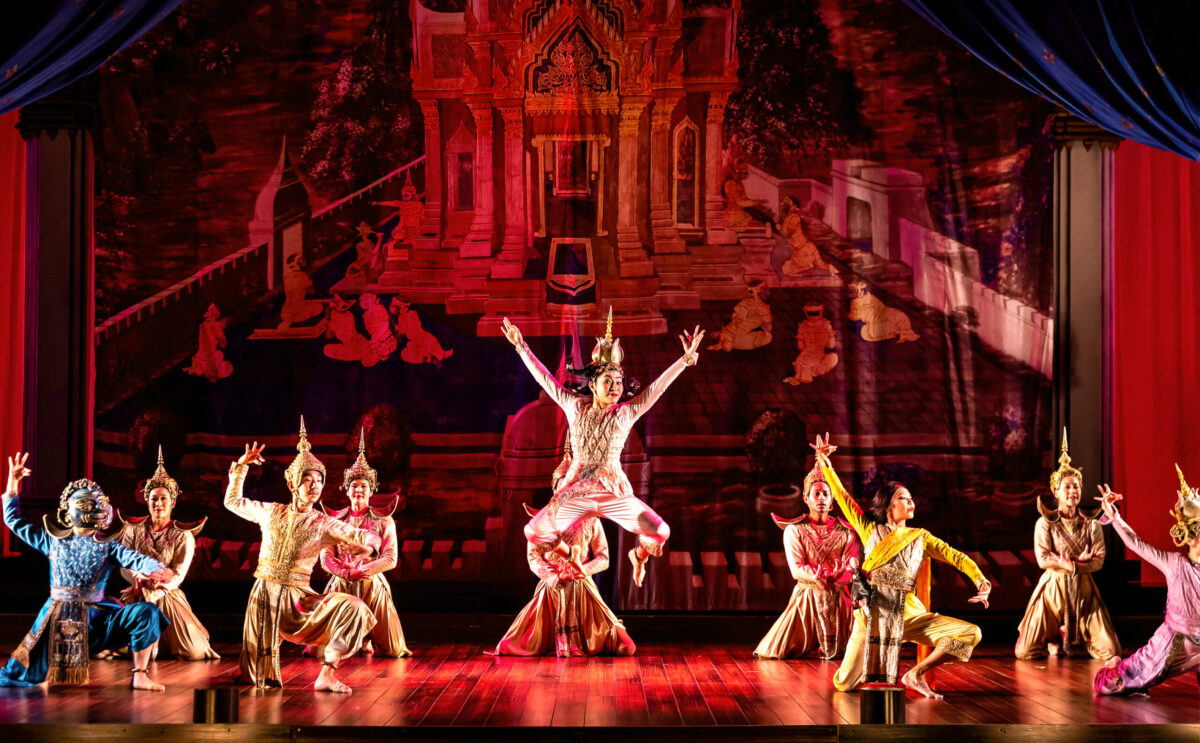 The ensemble in "The King and I." (Brett Beiner)
Performing Arts

‘The King and I’: Shall We Have Glorious Perfection?

CHICAGO—It’s such a welcome pleasure to be able to enjoy a show just as its creators intended. There’s no changing of Rodger’s and Hammerstein’s masterful work in Drury Lane’s exquisite and enchanting production of “The King and I.” Indeed, this is such a glorious musical that it would be a sacrilege to change one moment of it.

Oscar Hammerstein and Richard Rodgers adapted Margaret Landon’s 1944 biographical novel of “Anna and the King of Siam” to create one of the most memorable Broadway musicals of the 1950s. With lyrics by Hammerstein and melodic songs by Rodgers, these theatrical giants crafted a grand love story about the clash and romance between two determined and stubborn individuals who hold different values and come from different cultures.

The show is set in 1862 as widowed schoolteacher Anna Leonowens and her son Louis arrive in Siam (modern Thailand). She has traveled halfway around the world to tutor the children and many wives of King Mongkut. It doesn’t take long before their differing societal backgrounds come to the surface. Anna believes that she is being hired as a teacher while the King thinks he has added another servant. She comes from a culture of monogamy while the King thinks it’s only his right and due to have a harem.

Anna seems to believe that she can teach the King some civilizing values to help him become a more benevolent ruler.  The King, however, has other ideas. Despite their ideological battles and their intransigent views, the humanity of each brings the two together. Romance not only blooms between them but also between forbidden lovers Tuptim, the King’s slave concubine, and a young student Lun Tha.

This delightful revival stands out for its splendid direction by Alan Paul whose marvelous work will introduce the show to a new generation. While many musicals are presented in such a broad, grand, over-the-top manner that the story and the characters are overwhelmed, Paul brings an emotional intimacy to the show (even though the Drury Lane’s stage is quite large) that brings us closer to the characters and into the realm of another historical period.

Paul also does a nice job of directing “The Small House of Uncle Thomas.” He does not veer into political overtures but centers on the authenticity of the piece, presenting it with an honest simplicity that focuses on dreamy dance sequences by choreographer Darren Lee, who recreates Jerome Robbins’s original lush choreography.

Paul has assembled a terrific cast, which does the show proud. In a stand-out portrayal as the King, Adam Jacobs is compelling as the swaggering, intense dictator who despite his tyrannical bearing seeks to understand, to learn, and to bring his country into modern times.  When so many still remember Yul Brynner in his unforgettable portrayal of the King in the 1956 film, Jacobs has his job cut out for him. To his credit, he projects a powerful masculinity and formidable demeanor that delineates the egotistical king, yet at the same time brings out his humanity, vulnerability, and “et cetera, et cetera, et cetera” of a man challenged by foreign ways who is fighting an inner war between his upbringing and his better nature.

Matching Jacobs is Betsy Morgan, graceful and persuasive as Anna trying to impart Western ways to an Eastern world. Her performance sparkles with charm and sophistication as she draws in the king with gentle kindness, and the kind of independence he has never encountered before in a woman. Morgan has a beautiful soprano and delivers a captivating rendition of “Hello Young Lovers,” “Getting to Know You,” and “I Whistle a Happy Tune.” Together Jacobs and Morgan are riveting, especially when they sweep across the stage in the famous show-stopping “Shall We Dance” waltz.

Everything about this production is perfection. From the evocative Asian backdrop of the Siamese palace to a towering Buddhist temple by set designers Wilson Chin and Riw Rakkulchon, to Anna’s lavish silks and satins by costume designer Izumi Inaba, to Eric Southern’s lovely lighting, and to Tim Laciano’s terrific musical direction, this is a stunning production.