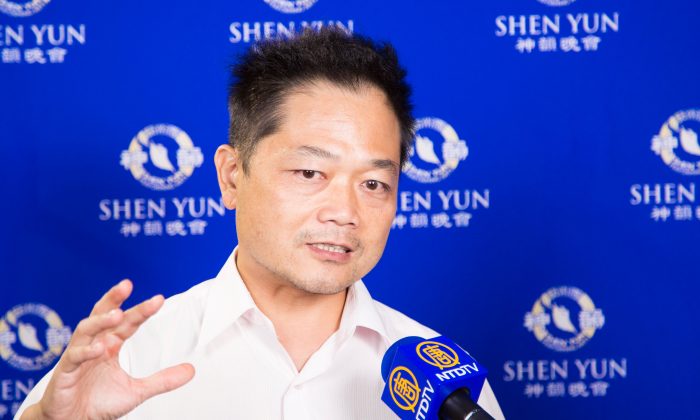 CHANGHUA, Taiwan—The search for adding new elements into Chinese music has not been easy for Li Jin-ren, principal of Luming Junior High School. The exploration, however, seems to be over, said Mr. Li, when he and more than 40 of his students went to see Shen Yun Symphony Orchestra.

“Today, I saw a new path,” said Mr. Li after seeing the performance at Yuanlin Performance Hall on Sept. 20. “I saw that two different cultures, Western and Chinese, can not only coexist but also be presented together in harmony.”

The school has a Chinese orchestra, and Mr. Li explained that there had been many attempts at school to integrate Western music with Chinese music.

He was amazed at the unique fusion that the symphony brought with its combination of Western and Chinese instruments—the fusion has allowed individual instruments to retain their own characteristics, sounds, beauty, and culture.

He elaborated, “The culture of each and every single instrument is portrayed in the orchestra.”

Much ingenuity lies behind the symphony orchestra. According to Shen Yun’s website, the Western orchestra serves as a foundation that helps to accentuate the sounds of the Chinese instruments.

He explained that while traditional Chinese music emphasizes subtle and inner feelings, the Western music tends to give an inspiring and uplifting emotion. “They belong to two different musical cultures. So it takes a lot of effort to put them together,” the principal said.

Mr. Li said that he could grasp the profound meanings behind the music.

“The music itself is very clean and neat,” said Mr. Li. “Yet it includes many levels of meanings. And the instruments themselves don’t speak in just one dimension. Moreover, the cultures behind the music are also multi-layered.”

“There is harmony and unity [in the music] while eliciting multiple characteristics at the same time.”

Emotionally, Mr. Li said, he was truly touched, for he said he was always excited about what he was going to hear next during the performance. As for how this was possible, Mr. Li explained it was because the orchestra was able to connect people’s own experiences with its music.

Additionally, there was much more to it than what met the ears, according to Mr. Li: “It was much more than a feast for the ears, as I had mental images [from the music]. So, this had somehow transformed into a visual experience as well,” said Mr. Li.

The school principal expressed his high praise for the performance. “I gasped in admiration. And at the same time, [the experience] was fresh and novel.”

He added that he felt uplifted and his mind “broadened to a magnificent level” after the performance.

To sum up what he thought about the music he heard tonight, Mr. Li said: “This is music. This is the beauty of music, the magnificence of music!”