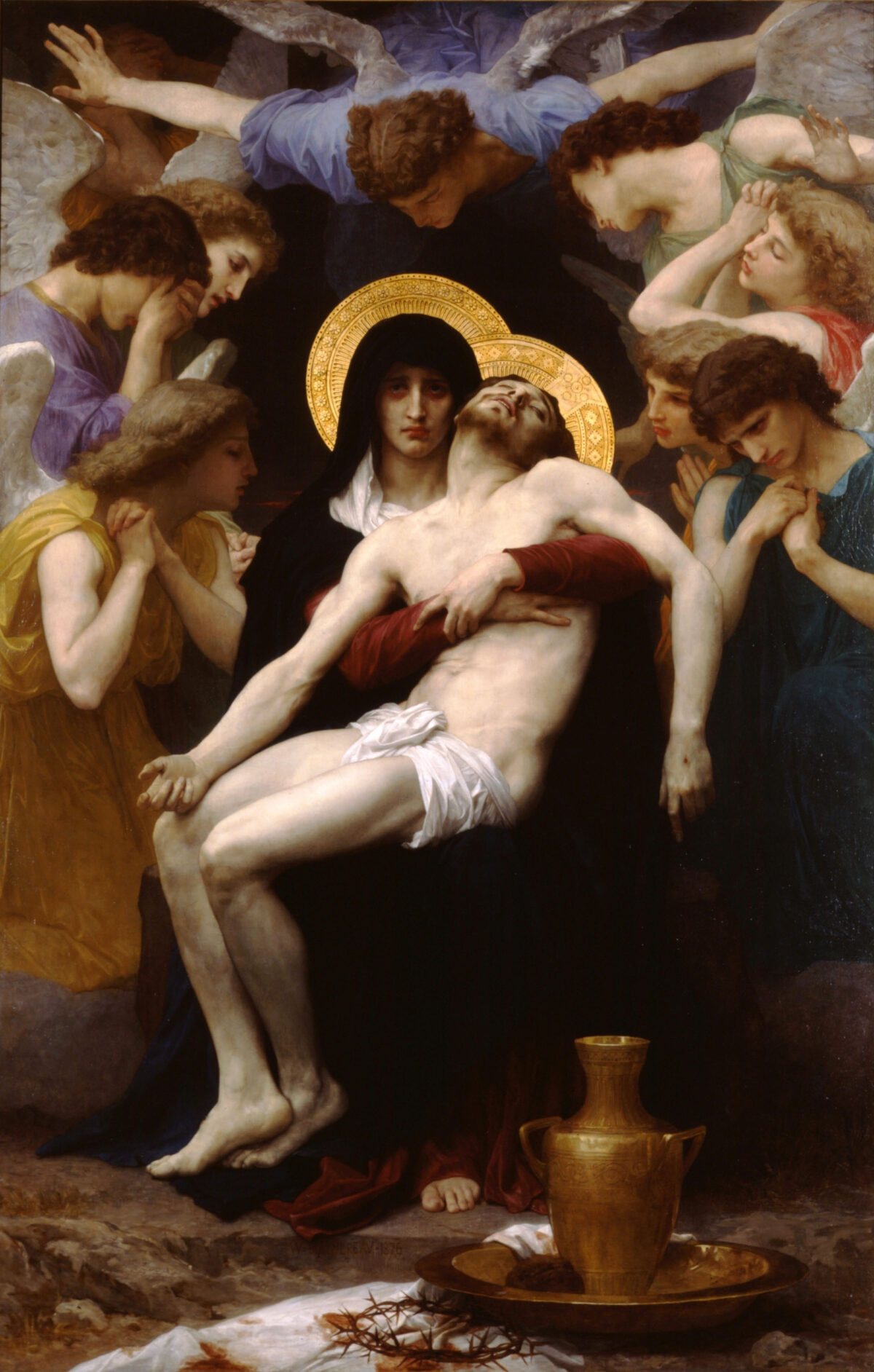 The Image of Compassion

The Pietà is a common theme throughout the history of Western art, and pertains to works of art that depict the Virgin Mary with Jesus after his crucifixion. The word “pietà” roughly translates to “pity” or “compassion,” and illustrates Mary’s love for her son.

The most famous Pietà is a sculpture by Renaissance artist Michelangelo. At the age of 24, Michelangelo finished “The Pietà” for a chapel at Old St. Peter’s Basilica, in Rome. Mary is depicted holding Jesus’s body in her lap. She has compassion for her son’s suffering, but accepts his fate. Mary’s slightly raised brow reveals a very subtle hint of sadness upon her youthful face.

Michelangelo was criticized for depicting Mary as looking as young as her son, Jesus; Michelangelo’s response was that women who remain chaste retain their youth and beauty. Mary is depicted somewhat larger than Jesus; Michelangelo most likely did this to provide a surface for the body of Christ, as Mary’s body needed to appear larger to be able to hold and support Jesus. The two seated figures are composed according to a triangle—a common geometric shape by which Renaissance art was composed.

Anthony van Dyck, a 17th-century Flemish Baroque artist, composed his own version of the Pietà. Mary Magdalene and Saint John are both included in his painting. Jesus’s body is shown draped in white, and lifelessly reclines against a rock, with Mary seated behind him. Although Jesus has perished, his halo still shines, indicating that the divinity of his soul is still alive. The Virgin looks sullenly to heaven; the pain on her face expresses the compassion she has for her son’s suffering. The palm of her left hand is open, and she gestures as if presenting Jesus to heaven.

Mary Magdalene, kneeling to the right of both Mary and Jesus, kisses Jesus’s hand. At the bottom left are the crown of thorns, the paper that was nailed to the cross reading “Jesus of Nazareth, King of Jews,” and a basin with a sponge. Van Dyck increased the drama of the composition using Baroque stylization, foregoing the triangular composition of the Renaissance in favor of more curves, movement, and emotion.

Almost 250 years later, William Bouguereau, foremost representative of the French Academic style of art, composed his version of the Pietà, inspired by the death of his eldest son. Mary, dressed in black in the center of the composition, mourns the death of her son. Firmly holding the lifeless body of Jesus, she stares out toward the viewer with a pained expression. The two figures possess gilded halos that represent their divinity.

At the bottom right of this composition, we again see the crown of thorns and the basin of water with which Jesus’s body was purified. Framing the two central figures are nine angels wearing the colors of the rainbow. According to Judaic traditions, this is an illustration of God’s promise to renew the world after Noah’s flood; in Christian traditions, it represents the renewal of the human soul.

Bouguereau inserted the personal pain of losing his own son into Mary’s expression. Depressed for six months after his loss, this painting became a way for him to renew his own spirit. The colors of the angels’ robes combined with the black and white worn by Mary and Jesus may also represent the full palette used in this composition. In other words, all the painted figures are possible representations that the divine is responsible for both the renewal of one’s spirit and artistic creation.

These three representations of the Pietà illustrate the compassion and pity a mother has for the suffering of her child. Michelangelo idealized the Virgin Mary and Jesus into a calm and accepting scene of suffering, Van Dyck dramatized the scene in order to emotionally move his viewers, and Bouguereau created a powerful image using the pain of his own loss as emotive inspiration. The one thing consistent across all these approaches is the depiction of compassion itself. We may not all have children, but we all have someone we care deeply about—or maybe we care deeply about humanity as a whole. Everyone experiences suffering irrespective of socioeconomic class, race, gender, etc. These images serve as encouragement to be compassionate toward our neighbors and ourselves.