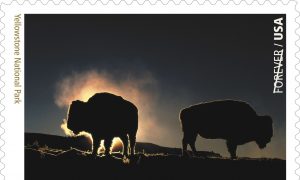 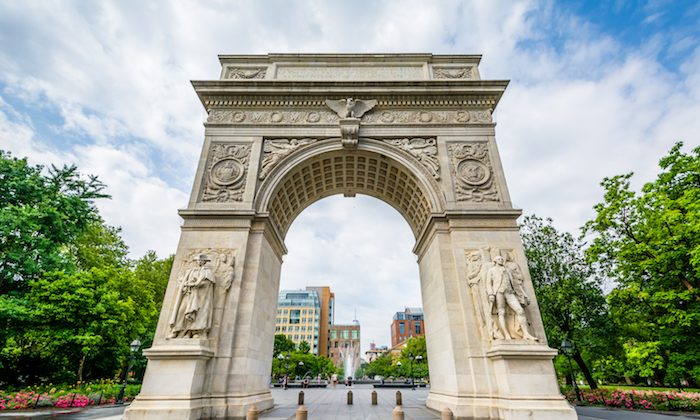 In 1889, the architect Stanford White made a wooden triumphal arch for New York’s Washington Square Park to celebrate the centenary of George Washington’s inauguration in New York. The temporary arch, topped with a wooden sculpture of the first president, was decorated in classical motifs made of papier-mâché and plaster.

The centenary arch was so impressive that White was commissioned to make a permanent monument in the park.

Dedicated on May 4, 1895, the permanent Washington Square Arch, made of marble, stands at 73 feet, 6 inches.

Inspired by Roman triumphal arches and the Arc de Triomphe in Paris, White’s arch is adorned with allegorical figures and classical motifs, which are reflected throughout, and in the reliefs sculpted by Frederick MacMonnies.

Two huge American eagle sculptures by Phillippe Martiny appear as if guarding the area from their north and south perches above the keystones.

On the north side of the arch are two 16-foot sculptures of Washington. “Washington as Commander-in-Chief Accompanied by Fame and Valor,”installed in 1916, by Hermon MacNeil, shows a calm and composed Washington flanked by the relief sculptures of Fame and Valor. Fame carries her trumpet to announce herself and holds a palm branch for peace, while Valor holds a sword; the oak leaves behind him symbolize courage.

The second sculpture, “Washington as President, Accompanied by Wisdom and Justice,” installed in 1918, by Alexander Stirling Calder, shows Washington poised as if he’s about to begin a public address. He stands in front of the relief sculptures of Wisdom and Justice. Wisdom holds a scroll to her chest and the handle of Justice’s ax, perhaps suggesting that justice and wisdom need to work in tandem. Justice holds the traditional scales and a book open to Washington’s motto: “Exitus acta probat,” which can be translated as “Judge me by the results of my actions.” High above them all on the arch is the Great Seal of the United States.

On the top of the south side of the arch are Washington’s words:

“Let us raise a standard to which the wise and honest can repair. The event is in the hand of God.”

To find out more about the Washington Square Arch, visit NYC Gov Parks.org/parks