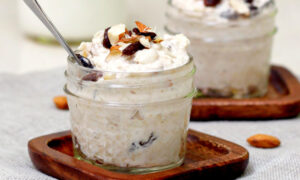 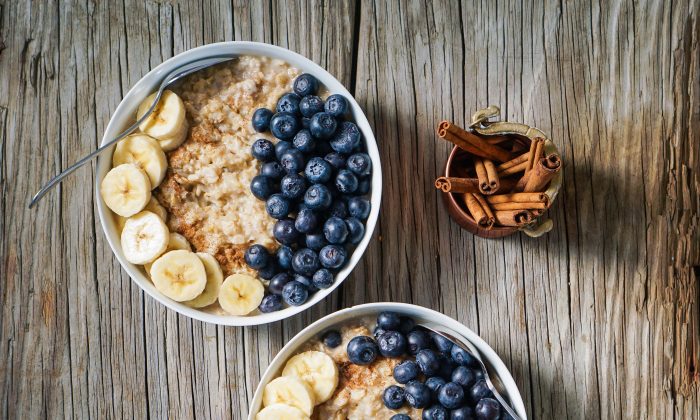 For oatmeal with the consistency of custard, cook it slowly, and once everything is added, no stirring! (AnastasiaKopa/Shutterstock)
Recipes

The Humble Glory of Oatmeal

Oat milk may be trendy, but a bowl of creamy, custard-style oatmeal is forever
By Ari LeVaux
biggersmaller
Print

“You have to eat oatmeal or you’ll dry up. Anybody knows that.”

The above claim has never been disproved. It was authored by Kay Thompson and uttered by a 6-year-old girl named Eloise, who lived in The Plaza Hotel in New York with Weenie the dog and Skipperdee the turtle. Ever since I first saw that quote, in the margin by the oatmeal raisin cookie recipe in “The Silver Palate Cookbook,” I’ve wondered what she meant.

Perhaps, young Eloise understood that oats absorb a lot of water as they cook, such that when you eat oats, you’re eating mostly water. Or maybe she meant “dry up” as a euphemism for “slow down.” Certainly, oatmeal has a reputation for keeping you going all day like the Energizer Bunny, thanks to the slow release of sugars from the complex carbohydrates in whole oats.

Whatever she exactly meant, she was right to cast oatmeal in a positive light. Superfoods and supplements get all the hype, but water and fiber are two of the biggest missing elements in a healthy diet, according to dietitians. And you’ll find both of those in a bowl of oatmeal.

Nowadays, more and more people reach for oat milk when they want their oats and water. It’s a rising star in the non-dairy milk category, especially among coffee drinkers looking for a dairy substitute. It has a creaminess other nut- and grain-based milks don’t, despite being made from the cheapest raw ingredient of any of them. It’s no wonder the oat milk sector has a target on its back, with its fellow vegan milk-makers taking aim.

Regulators are too, though not out of jealously. In 2019, the USDA asked several oat milk makers to disclose added sugars in their nutritional labels, even though technically there are none. But manufacturers have figured out how to use enzymes to release sugar that had been locked up in oat starch. This adds sugar without adding sugar.

I wanted to try my hand at enzymatic oat milk, so I reached out to Oatly, the undisputed leader in the oat milk industry, hoping for some clues. An Oatly representative declined to share which enzymes they use, so after a bit of research, I ordered my best guess of some good candidates, including amylase and beta-glucanase. A few weeks later, when my wife acknowledged that my latest batch of oat milk wasn’t awful, I knew I was getting close to the recipe. Or so I thought. A few days later, while working on my project, I stumbled upon the actual patent that Oatly had filed.

As I scrolled through U.S. patent no. 6451369B1, titled “Non-dairy, ready-to-use milk substitute, and products made therewith,” I quickly found this passage:

“The disclosed cereal suspension is prepared by treating a suspension of oatmeal with beta-amylase, which has no glucanase and proteinase activity, in a first enzyme treatment step, which specifically generates maltose and maltodextrin units.”

In English, it says that amylase enzyme, which I had been using, is indeed responsible for generating sugar from oat starch. I celebrated this moral victory with one of my favorite late-night snacks: dry oats with canned whipped cream and maple syrup.

Eloise would not approve, and this treat probably won’t make it onto any dessert carts, but I really like the juxtaposition between the moist, fatty whip and plain dry grains. I also enjoy the esoteric contrast between wholesome oats and trashy canned whipped cream. Most canned whip is quite sweet, but the syrup takes this dish over the edge, which is what a midnight snack is all about.

The next morning, I made oatmeal for breakfast, and realized my morning bowl of oats is almost as much of an indulgence as my midnight snack, and with a lot more water. There may be less glory in a bowl of oatmeal than a fresh-squeezed glass of oat milk, but there is ample joy and plenty of room for artistry.

Oatmeal is a personal thing. Some like it soupy, others firm. I prefer mine with a custard-like consistency that vibrates like Jell-O when you slap the pot, with a creamy, frosting-like layer on top that results from my special process. Getting to the bottom of a bowl of my oatmeal is hardly a grueling experience.

And after years of enjoying it, I’ve yet to dry out. Eloise’s law remains intact.

This is how I get oatmeal to the consistency of custard. The key is to cook it slowly, and once everything is added, no stirring! The butter and cream form something of a frosting on top, while the lower level of oats is drier.

Although the active time for this recipe is barely two minutes, allow an hour for the oatmeal to properly simmer and rest.

Add the oats, water, and butter to a pan and set it on high until it boils, about 4 minutes. Turn down to medium for about 2 minutes while you add the cream and blueberries and stir them in. As you stir this final time, feel the bottom with your implement and scrape it well if anything happens to be sticking.

Turn it down to low and cook with the lid off for 20 minutes, not stirring. Then, turn it off and let it rest another 20 minutes, covered. Serve with maple syrup.