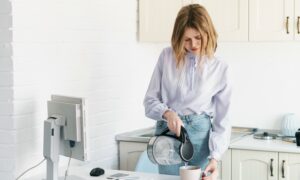 What Does Being Healthy Really Mean? 5 Differences Between Chinese and Western Medicine

Chinese medicine is on the rise as a form of alternative treatment. And although modern Western medicine cannot properly explain how it works, Chinese medical techniques such as acupuncture have been recognized as effective ways to cure certain illnesses.

But Chinese medicine is more than just a branch of alternative medicine. It is a complete, extensive system of medicine with a history that goes backan estimated 5,000 to 7,000 years.

Here are five essential points of difference to know between Chinese and Western medicine.

1. Human Body: Just a “Body” Or Something More?

Chinese Medicine: The philosophy of Chinese medicine can be understood in the context of classical Taoism. Chinese physicians view the human body as an intricately connected universe, albeit a microscopic one, comprising the “five elements”—metal, wood, water, fire, earth—and governed by dichotomous yin-yang forces.

Western Medicine: Modern Western medicine understands the body as distinct parts that can be examined on their own. This approach stems from a 19th century understanding of microbes, and the “germ theory” formulatedby French chemist Louis Pasteur (1822–1895) and German “bacteriologist” (an anachronism) Robert Koch (1843-1910).

2. Battle Against Microbes Vs. Balancing Act

Under the microscope. (Microbes via Shutterstock)

Chinese Medicine: Chinese medicine is based on ensuring a balance between the yin and yang elements in the body, and regulating the body’s vital energy, or “qi” (pronounced “chee”). Illnesses pop up when there’s a yin-yang imbalance in the body, or if the body’s internal pathways, or meridians, are blocked somewhere, thus impeding the flow of qi.

There are plenty of different herbs, minerals, sea and land animal extracts in Chinese medicine. (Herbs via Shutterstock)

Chinese Medicine: The legendary first Chinese physician Shennong identified 365 healing herbs 5,000 years ago and Chinese physicians have been adding to the list ever since. Minerals, insects, sea-animals and parts from larger animals are also used. These ingredients are mixed into liquid or pill form, and target general areas of the body to restore the yin-yang equilibrium.

Western Medicine: Western medicine also originally derives from various plants and herbs. However, today most medicines aren’t used in their natural state. Rather they are synthesized chemically in a manufacturing process. They are also largely designed to target specific symptoms and body parts, and it’s common that one medication is needed to counteract the side-effects of another, and another for those side-effects, and so on.