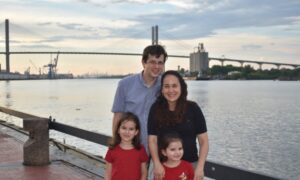 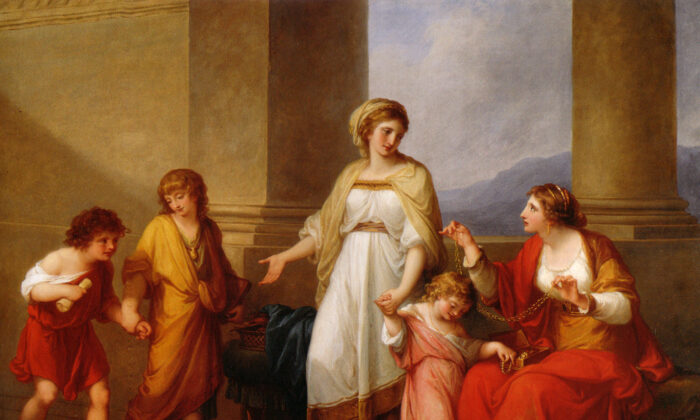 The Hand That Rocks the Cradle: Roman Women and Their Legacy Today

For centuries after its founding in 753 B.C., Rome inculcated in its men “virtus,” a word weighted with meaning: manliness, courage, character, and self-worth. Coupled with “pietas,” which connoted respect for the gods, their country, and their families, virtus produced the citizens, soldiers, and leaders who would expand the power and influence of Rome from a tiny village on the Tiber River to lands as far-flung as England, Egypt, and Syria.

When we read of the Roman heroes of the monarchy (753–509 B.C.) and the republic (509–27 B.C.), some of them near-mythical figures such as the founder Romulus or the doughty warrior Horatius Cocles, others historical personages such as the great general Scipio Africanus or the philosopher-statesman Cicero, we see these virtues reflected in the actions of these men. In his epic poem “The Aeneid,” Virgil blends together virtus and pietas, then pours that mixture into his archetype of a Roman hero, “Pius Aeneas,” or “Pious Aeneas.” Here is the warrior who leads the surviving Trojans from their burning city, the man of destiny who along with his companions searches the Mediterranean for a new homeland.

In movies such as “Gladiator” and “Quo Vadis,” writers and directors give us glimpses into the men who once practiced these virtues, for whom virtus and pietas were the foundation stones of character and “dignitas.”

But what of Roman women? Were they also taught a code of sorts? Did they too live by a set of values cherished by the culture at large? Did they not have a hand in the making of Rome? And can we moderns, particularly the women among us, connect with them today?

Though theoretically a patriarchal society—the father, for example, possessed the power of life and death over his wife and children, though he rarely exercised this right—Roman women had greater freedom than their counterparts in Greece and, for that matter, in many other parts of the world.

As Will Durant informs us in the volume on Rome in his massive work, “The Story of Civilization,” a free Roman female could shop in the marketplace, she wasn’t confined to women’s quarters at home, and she played an active role in managing the household servants and finances. She might sit weaving at her loom, an image of respect and reverence much like our American idiom “motherhood and apple pie,” but she might also own a business and could inherit money.

Though forbidden to vote, Roman women nonetheless influenced the government through a variety of devices. Durant gives several examples of this hidden power in his “Story of Civilization.” Complaining of their growing power and affection for luxury, for instance, Cato (234–149 B.C.) once lamented, “All other men rule over women; but we Romans, who rule all men, are ruled by our women.” When the free women of Rome stormed the Forum and protested a law that forbade them to wear gold ornaments or multicolored dresses, Cato denounced them, saying in a speech reported by the historian Livy that “from the moment that they become your equals they will be your masters.”

Cato lost the argument. The women mocked him and held firm in their demands for their luxuries, and the law was repealed.

As time passed, women won even more personal freedom. According to Durant, “Legislation kept women subject, custom made them free.”

Despite this increasing liberty, most of these female citizens continued their devotion to their husbands and their children well into the time of the empire. They spun their wool, oversaw the education and rearing of their sons and daughters, and worshipped the household gods. Durant points to the epitaphs on their tombs to show the devotion of husbands and children to these women. “To my dear wife,” reads one, “with whom I passed eighteen happy years. For love of her I have sworn never to remarry.” Another such inscription reads, “Here lie the bones of Urbilia, wife of Primus. She was dearer to me than life. She died at twenty-three, beloved by all. Farewell, my consolation!”

Durant also tells us that many wealthier women engaged in social service and philanthropy in their communities, even funding buildings such as temples and theaters for their towns.

In times of persecution and civil strife, stouthearted women such as these fearlessly protected their husbands, children, and friends. In his chapter “Epicurean Rome: 30 B.C.–A.D. 96,” Durant includes a catalog of some of these more famous defenders of hearth and home during those often tumultuous times: “Epicharis, the freedwoman who suffered every torment rather than betray the conspiracy of Piso; the unnumbered women who concealed and protected their husbands in the proscriptions, went with them into exile, or like Fannia, wife of Helvidius, defended them at great risk and cost.”

Similarly, most mothers of ancient Rome remain nameless today, their work and their deeds lost in the mists of history. Yet the story of one Roman matron might possibly serve as a benchmark of their maternal arts.

Cornelia, daughter of Scipio Africanus, was the wife of Tiberius Gracchus and mother of their 12 children, only three of whom survived adolescence. After her husband’s death, Cornelia made certain that her two sons, Tiberius and Gaius, who as adults would advocate constitutional reforms and be assassinated for those efforts, received the best of educations. She hired Greek tutors to teach them oratory and politics, and saw that others trained them well in the arts of war and horsemanship.

A story has it that a female friend who was visiting Cornelia showed her some jewelry she’d recently acquired and then asked, “Where are your jewels, Cornelia?” Cornelia summoned Tiberius and Gaius, put her arms around them, and said, “Here are my jewels.”

We may know little about these wives and mothers, but as Durant tells us, even in those dangerous and decadent days when emperors like Caligula and Nero governed Rome, their “marital fidelity and maternal sacrifices sustained the whole structure of Roman life.” Attesting to those sacrifices and the strength and diligence of Roman mothers are the sons they bred and raised, who went on to conquer and rule so much of the world.

In his “Aeneid,” Virgil creates three women who also served as models for feminine virtue. As they are fleeing Troy, Creusa, the wife of Aeneas, becomes separated from her husband and dies in the conflagration. When Aeneas returns to find her, Creusa’s ghost appears and nobly urges him to flee, prophesying that he will found a nation and find a new wife.

On his journey in search of this homeland, Aeneas meets Dido, queen of Carthage, the city that later became Rome’s mortal enemy. In the widowed Dido are some of those character traits Virgil would have noted in the wealthy women of his time: beauty, wisdom and insight, passion, and a willingness to use power.

The goddess Venus, protector and benefactor of the Trojans, is also the mother of Aeneas. Like all good Roman mothers, she watches over her son, strives to shield him from harm, particularly from the spiteful queen of the gods, Juno, and eventually makes clear her love for her son.

“It was Rome, not Greece, that raised the family to new heights in the ancient world,” writes Durant. We might add that Roman mothers and wives played a vital role in attaining those heights.

The legacy of those close-knit families and the unknown devoted parents who created and maintained them is still in evidence today. Flash-forward in time 2,000 years, and despite our cultural confusion, the modern wives and mothers whose names will never appear in history books remain the bedrock of both the American family and our society.

That tired-looking pregnant mom with three small children in the pew ahead of me at church this morning is heir and keeper of the old Roman virtues of motherhood. Her gestures and whispered words to her little ones told me that she, like her Roman counterparts, loved her children, was overseeing their behavior and education, and was teaching them to honor their God. Wrap her in a tunic and stola, send her back to the Rome of Julius Caesar, and she would find honor as a virtuous woman.

In 1865, the now largely forgotten American poet William Ross Wallace wrote a poem containing the lines “The hand that rocks the cradle is the hand that rules the world.”

It was true for the Romans. It is true today.