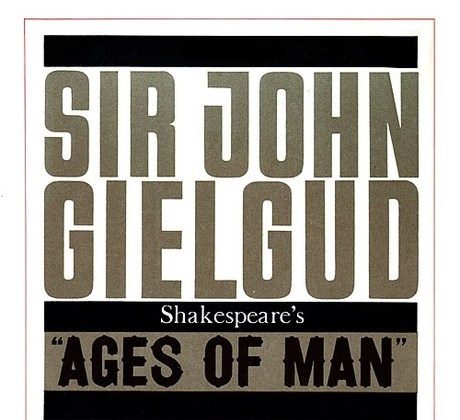 The Greatest Spoken-Word Album? Gielgud’s ‘Ages of Man’ Is a Contender

When I go to a Shakespeare production, I pay attention to all the elements, as I would for any other play, but I especially listen to the language of our greatest playwright and poet.

For example, at the current Shakespeare in the Park production of “The Tempest,” Sam Waterston’s doddering Prospero was only fitfully effective and the beauty of the words was often lost. (To be fair, he sounded rather hoarse at the performance I attended.)

The gold standard for the handling of Shakespeare’s language is Sir John Gielgud (1904–2000). As Harold Bloom once noted in an Atlantic Unbound interview:

“I’ve seen only one Hamlet that immensely moved me. It was, of course, Sir John Gielgud. Somehow his gestures were not right for the part. But no actor could speak Shakespeare the way Gielgud could. If you just shut your eyes and listened, the cognitive music that was coming out of this man’s mouth was quite overwhelming. Whether it was acting or something else, I don’t know.”

Unfortunately, Gielgud was rarely given a chance in movies to display the full range of his talent (although he did win an Oscar for best supporting actor for his comic turn as the butler in “Arthur”). The problem may be that Gielgud lacked Laurence Olivier’s good looks and physicality. Probably his most effective film performance in a Shakespearean role was his Cassius in Joseph Mankiewicz’s “Julius Caesar.”

Late in life, Gielgud  actually got to play the lead in a film version of “The Tempest,” but unfortunately the director of “Prospero’s Books,” Peter Greenaway, made a mess of it. (Please feel free to disagree with me; some find the movie ravishingly beautiful.)

During the late 1950s, Gielgud put together a one-man show of the Bard’s writings, which he called “Shakespeare’s Ages of Man.” He performed it in Europe and the United States, where it was shown on television. He also made a recording in 1958, at the end of a Broadway run. That performance has now been released on CD for the first time by Sony on its Masterworks Broadway label.

The show is divided into three sections: Youth, Manhood, and Old Age.

Gielgud begins with “The Ages of Man” speech from “As You Like It.” Then, from “The Merchant of Venice” he plays the young Lorenzo in love with Shylock’s daughter Jessica, with whom he has eloped. Although in his early 60s at the time, Gielgud sounds like the most romantic of lovers.

Gielgud then chooses a lyrical speech from the most unlikely character in “The Tempest” for him to play (and I doubt he ever did)—the drunken slave Caliban. As Mercutio in “Romeo and Juliet,” he pokes fun at the lovelorn Romeo.

In between the excerpts from the plays, Gielgud interjects three sonnets about love, the first two waxing poetic and the last (no. 130) going on about his mistress’s failings before he ends with a declaration of affection.

As the strict judge Angelo in “Measure for Measure,” he is astonished to realize that he has fallen for the virtuous Isabella.

The Manhood Section is short: The warrior Hotspur in “Henry IV, Part 1,” defends himself from a charge of insubordination and rages against a nobleman who talked like a “gentlewoman.”

The second speech is by the villainous Richard II, who contemplates his downfall and the “heavy weight” of the crown.

Old Age starts with Sonnet 138, dealing with an elderly man’s attitude toward his unfaithful mistress. She doesn’t admit that she is cheating on him just as he can’t accept the fact that his best days are behind him. In Sonnet 73, he clings to life as he draws closer to death. It concludes with the line, “To love that well which thou must leave ere long.”

The king in “Henry IV, Part 2” delivers a monologue about his suffering from insomnia while his subjects are sleeping soundly. Clarence, a prisoner in the Tower of London in “Richard III,” is wracked by nightmares about the price he will have to pay after death for his sins. Claudio in “Measure for Measure” faces execution and expresses his fear. On the other hand, Julius Caesar is philosophical about the end of life as he ignores his wife’s pleas and heads off to be assassinated.

Gielgud recreates Hamlet’s “To be or not to be” monologue with a range of colors that makes the familiar text fresh. Then, he becomes the pitiable old King Lear, howling with pain as he carries the dead body of his daughter Cordelia.

Gielgud ends with “The Tempest” (Shakespeare’s last play): The “Our revels now are ended” speech is thought by some to represent the Bard’s farewell to his audience. Prospero says, “We are such stuff as our dreams are made on.”

The return of this legendary recording is a dream come true for theater lovers.