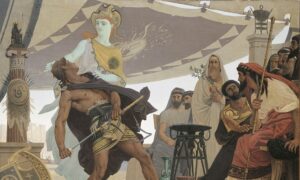 The Power of Restraint: ‘The Wrath of Achilles’
0
Share Now
TelegramFacebookTweetEmailTellMeWeReddit
Copy Link 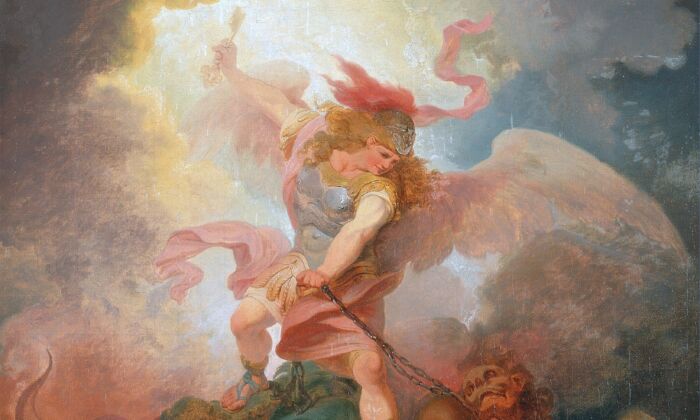 The Goodness of Heaven Is Key: ‘The Angel Binding Satan’

Let’s close our eyes and imagine the best version of ourselves. What does this look like for us? How do we behave?

Most likely, we all see a different vision when we perform this thought experiment. Some of us may imagine ourselves with a lot of money, fame, or power; we might think that these attributes are necessary in order to become our best selves.

However, I think it’s important to remember that people with money, fame, and power can be either good, generous, and compassionate or otherwise destructive and malicious. We must then ask: Can we be the best version of ourselves if we act as bad people? Of course, if you ask me, the answer is a resounding no!

Loutherbourg’s painting is a colorful depiction of an angel stepping on the side of Satan. Typically, it is the Archangel Michael who is depicted defeating Satan in this way (as in Guido Reni’s example), and so we will refer to the angel as Michael.

Michael is the focal point of the painting. The pastel pink cloth that flows around the cool grays of his armor helps him stand out against the skylit background.

His pose is a dynamic one: His right leg is steadied on a rock behind him while his left leg steps on the side of Satan. His outspread wings supplement both the color and the activity of the cloth that flows around him; his flowing, golden locks mimic the color of the key he holds to the heavens in his right hand; and his left hand grabs the chains that now bind Satan.

Satan is depicted in a pose of defeat. His body contorts from the pressure of Michael’s foot, while he reaches for the chains the archangel has cast around his neck. His other hand grabs a snake that wraps around his arm, and his head, which Loutherbourg depicted as a skull, turns around to look at Michael.

Satan does not stand out from his environment much. If we squint our eyes at the image, we will notice that his upper body is almost indistinguishable from the background. Interestingly enough, Satan’s body stands out the most from its environment around the area where Michael plants his foot.

The complementary (contrasting) colors of muted green and intense red engulf the lower half of the composition. Satan’s legs morph into green serpents’ tails, one of which descends into the fierce, red heat of hell below him. The other leg coils into the far distance, on the composition’s left side.

What wisdom might this image contribute to our becoming our best selves?

It’s easy to think that this image represents a battle of good and evil between heaven and hell and that this battle exists in a place “out there,” separate from us. However, let’s take a moment to turn our gaze within and consider that this painting represents a struggle that occurs inside us.

Loutherbourg depicted Satan with a skull for a head. Typically, skulls in fine art represent death or destruction. One of Satan’s serpentine legs descends into hell, and the other spins into the distance; he also holds a snake in his left hand. These serpentine elements represent temptation. Thus, we can conclude that Satan represents death, destruction, temptation, or even a relationship between these elements: death and destruction resulting from temptation. These temptations spread to the world around us and connect us to hell, like Satan’s serpentine legs.

If Satan represents the evil elements, then, according to the painting we’re analyzing, evil would correspond to those temptations that cause death and destruction. How can we, to find out better selves, control destructive temptations in us?

Michael would represent the control of temptation that causes death and destruction. He controls Satan with his foot and chains. Michael, an angel representing the goodness of heaven, can bind Satan, the embodiment of evil. He holds a key up to the light of heaven. Is this the key that chains Satan in place and keeps him prisoner? Does this suggest that it is by way of heaven that evil is defeated?

The key may not only be that which locks Satan and his temptations away but may also be symbolic of the key that frees us from the prison of temptation.