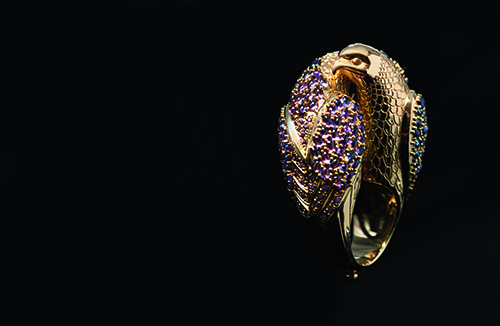 "Man has always envied the flight of birds and has attempted to emulate them since ancient times," Temple St. Clair writes in "The Golden Menagerie." (Harald Gottschalk)
Arts & Culture

‘The Golden Menagerie’ Explores Creatures of Myth and Gemstone

The mythical creatures, animals of folklore, and romanticized, extinct creatures immortalized by jewelry designer Temple St. Clair have been bound together in “The Golden Menagerie,” a book of 100-plus illustrations to be published on Dec. 5.

The book gives the the reader an exclusive view into the artistry and process of creating gold and gemstone haute couture jewelry, with luminous photography that brings each jeweled creature to life.

“Mythical Creatures,” the first chapter, views subjects through a fairy tale lens, with pieces like The Phoenix Chicks, The Sea Dragon, and The Frog Prince.

Chapter two, “Wings of Desire,” looks at history and folklore, with three sculptural rings showing the life cycles of birds of prey; a series of five rings depicting mythological and mythologized winged creatures like the hippocamp, swan, and Pegasus; and a series of earrings titled “Fantasy Birds.”

The third and last chapter, “The Big Game” (on view at the DeLorenzo Gallery from Dec. 8 to Feb. 14, 2017), documents St. Clair’s exploration of animals that are extinct or currently threatened. St. Clair creates romanticized portraits of these animals in a peaceful environment, encapsulated in exquisite, individual marble boxes.

A native of Roanoke, Virginia, St. Clair said she grew up in the countryside with many animals around and has always been fascinated by both land and marine creatures. Many of the creatures she chose to depict come with a personal memory or story in the book.

“With my haute couture work, I take complete artistic liberty to explore themes that are very personal and dear to me,” St. Clair said. “I chose animals that, either there were some memories or experiences attached to them, or animals I just have great love and respect for.”

St. Clair is at her very core a storyteller and explorer. When inspiration sparks, she is compelled to research and delve deeply into her subjects.

She also draws from a deep well of history and human culture to create her inventive pieces.

St. Clair has been a high-end jewelry designer for over 30 years and in 2016 won the GEM Award for Jewelry Design, the jewelry industry’s most prestigious honor.

In her early 20s, she had been studying 14th-century Italian art and literature in Florence when her mother basically sent her on an errand that dropped her into a fascinating world. St. Clair’s mother had bought an ancient coin and tasked her with finding a goldsmith to turn it into a necklace.

What St. Clair found were artists who were working in almost the same places and using the same techniques that artisans had for generations and generations.

“It was as if I had gone back through a time machine into this period I had been studying and was so involved with,” she said.

Gold is a durable, valuable substance that has lasting power and has been handed down from antiquity. Take the ancient Greeks and Romans, or the ancient cultures of India and China. “Gold has been so important and so sought after by every culture,” St. Clair said.

“I see myself as a part of a bigger history, part of human tradition and culture,” St. Clair said.

The human tradition of the craft drew St. Clair in, and gold and gems became her palette for creativity, her vehicle to create and tell stories important to human beings.

“To be an artist … you’re deciding to make something out of nothing; to express something, create something, paint a picture,” St. Clair said. “I want to express myself and explore things. … That is what is important to me.”