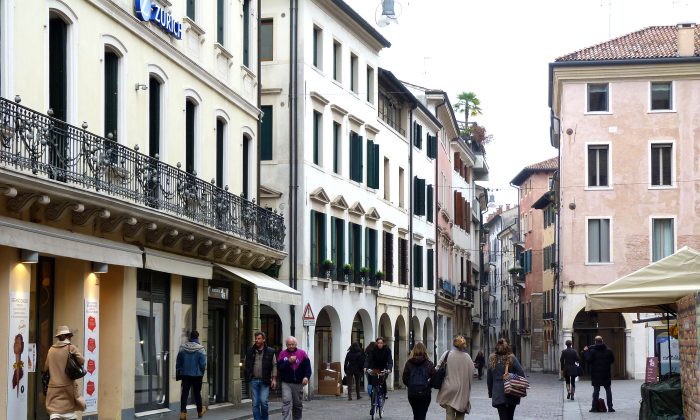 The Gastronomic Delights of Treviso, Italy

Treviso is one of a number of picturesque medieval towns in northeast Italy. It’s barely a half-hour train ride from Venice and a must-see for anyone who loves good wine, good food, fine shopping, and a charming, laid-back ambience. It is also the ne plus ultra terroir for Prosecco, the delicious sparkling wine that is replacing champagne in the hearts of millions around the world.

On a recent fact-finding visit to Treviso’s mostly family owned world-class producers, I was captivated with the area’s cuisine. No Michelin-starred restaurants or palaces of gastronomy—only local restaurants serving the freshest available seasonal foods. I was there at the invitation of Treviso Glocal, a local consortium affiliated with the Chamber of Commerce.

Our food odyssey began at all’Antico Portico, a modest local eatery at the corner of Piazza Santa Maria Maggiore, one of the many charming squares in Treviso. Luckily, I was travelling with foodies and we quickly bonded, sharing plates with each other so as not to miss tasting any of the delectable morsels set before us.

We ordered dishes that represented the food culture of Treviso: zucchini flowers filled with mozzarella and hot cream cheese with truffles; prawns with polenta; fried ricotta with marinated radicchio; and pumpkin gnocchi topped with melted butter and poppy seeds. Next course: home-made tagliolini with shaved truffles; ravioli stuffed with basil, fresh tomatoes and cheese; and baccalà (salt cod) with polenta. We each had our favourites, but suffice it to say the quality and ingenuity of the dishes was a revelation and a forerunner of great meals to come.

After lunch we walked to Piazza Duomo and the Cathedral of St. Peter with its altar painting of the 16th century “The Annunciation” by Titian. Our exploration took us under the ancient archways that retain remnants of the colourful frescos that once graced the columns and vaulted ceilings of the public walkways, to the Piazza de Signori at the centre of Treviso.

In nearby Piazza Ancilotto we visited a small restaurant and sweetshop called Le Beccherie that has been there since 1939. In 1970, then-owner and cook Ada Campeol developed tiramisù to give her a “pick-me-up” (the actual translation of tiramisù). The home of tiramisù has since undergone a complete revamp, and the new owners have created an updated version called “scomposto.” And although it was beautiful to behold and delicious to taste, the original still won our hearts.

Since we had an abundant lunch topped with tiramisù tasting, we ordered small plates—forgetting of course that in Italy nothing to do with food is ever small.

Dinner was at Abitue San Parisio, another local gem just off Piazza San Vito. Since we had an abundant lunch topped with tiramisù tasting, we ordered small plates—forgetting of course that in Italy nothing to do with food is ever small.

I ordered beef tartare made with prime Piemontese beef that was absolutely divine; anchovy, onion, chopped pickles, mustard, and paprika accompanied the beef for mixing. I consumed the generous portion, only to be confronted with an unusual dish of prawns wrapped in pasta kataifi (similar to shredded wheat) served over a thick bright-green bean soup, and a salad of huge chunks of tender fresh-grilled octopus over ripe juicy tomatoes and greens fresh from the garden. Eating moderately was not on the menu!

Osteria al Forno di Agnese in the village of Civita di Bagnoregio is a no-nonsense mom and pop restaurant owned and operated by the Piol family. We began with a lovely appetizer of poached pear on robiola cheese. Risotto with mushroom and pumpkin came next, and although risotto is not my favourite dish, it was without a doubt the best I ever tasted.

Seafood Fresh from the Adriatic

Locanda da Lino is located in Solighetto and is part restaurant, part museum, part hotel. It was founded in 1961 by renowned chef Lino Toffolin, who took an old farmhouse and turned it into a rambling eclectic fantasyland of artwork, antiques, chic décor, indoor garden and outdoor vine-covered pergola, and lavish fresh-flower arrangements. Topping it off is a collection of copper pots hanging from the rafters that would make any archaeological museum green with envy.

Fortunately we were there on Thursday for their weekly seafood menu fresh from the Adriatic. We started with Toffoli Prosecco (produced by Lino’s son Marco whose winery we had visited earlier in the day). The dishes appeared: delectable cubes of white fish in olive oil; sardines topped by olives and tomatoes; grilled crawfish fanned out on a plate; mussels and clams en brodo; scallops baked in the shell; fried soft-shell crabs; home-made pasta with octopus; octopus salad; baby octopus in red wine sauce—the selection was endless, creative, and delicious.

Our encounter with the cuisine of Treviso ended with dinner at Odeon alla Colonna. Here I had the most unusual and delicious antipasto of black-pepper robiola (soft cheese) ice-cream with caramelized pears and pistachio nuts. Dessert was their version of tiramisù made and served in a jar.