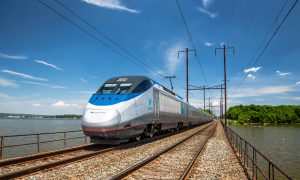 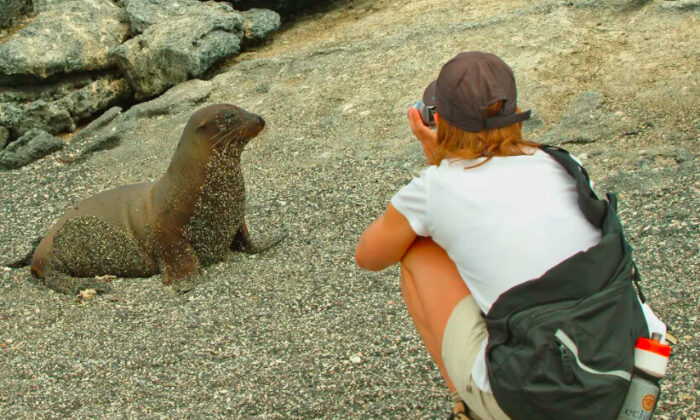 It’s easy for tourists to take good close-up photos of most Galapagos wildlife, but it’s prohibited to use flash, or touch, or otherwise bother wildlife, and you must stay within trails and other permitted spaces. Wardens are usually nearby and enforce all rules. (Fred J. Eckert)
Destinations

The Galapagos Islands: Like No Other Place in the World

“He looks like ET,” I remark to a friend as I gaze intently through my camera lens.

I am in the Galapagos Islands, 600 miles out in the Pacific Ocean off the coast of the South American country of Ecuador. I am lying in the dirt so that I can get an eye-level, close-up photo of the long-necked giant tortoise that is less than 10 feet in front of me.

A Galapagos giant tortoise can reach a height of nearly five feet and weigh as much as 500 pounds. Scientists believe these bizarre creatures can live for more than 150 years, perhaps even for as long as 200 years.

This means that the creature that I was photographing may have been hanging out in these parts during the American Civil War or even during the War of 1812.

There are few places in the world where wildlife is so easy to see and photograph as it is in the Galapagos Islands.

The strange beings that inhabit these 13 large islands, six small islands, and more than 40 islets are either unique to the Galapagos or not found in such numbers anywhere else on Earth.

What makes the place even more remarkable is that the creatures of the Galapagos are so unafraid of humans, and so unthreatening, that visiting one of these islands is like taking a walk through some sort of petting zoo of bizarre creatures.

Except that in Ecuador’s Galapagos National Park—which covers 97 percent of the land area of these islands, the other 3 percent being either agricultural land or part of some tiny town—one mustn’t touch or bother the creatures.

To protect the fragile environment of the archipelago, strict rules are imposed and there is a limit to the number of visitors permitted—no more than 60,000 per year.

Whenever you are inside the Galapagos National Park, a licensed Galapagos guide must accompany you. Tourists are permitted to land only at one of the official visitor sites, of which there are about 50.

At a site designated as “open,” you are free to wander anywhere within the clearly delineated site boundaries. For example, a large beach area may be designated an “open” site so that visitors can walk freely among colonies of sea lions.

At a site designated as “restricted,” you must always stay on a clearly marked trail to help ensure that you don’t disturb either the wildlife or the vegetation upon which the wildlife is dependent. This requirement also helps the animals adjust their territorial instincts to the path pattern of human visitors.

My visit to the Galapagos was on a tour organized and operated by Metropolitan Touring, the most experienced and premier tour operator for the Galapagos Islands and the country of Ecuador. The vessel on which we traveled among the islands was designed especially for Galapagos Islands cruising. It was air-conditioned, fully carpeted, and very comfortable.

The first island that we visited, following a flight from Ecuador’s capital city of Quito, was the island of Santa Cruz. It’s also known as Indefatigable or Chavez. All the Galapagos Islands have at least two names—one Spanish, one English—and some have a third name as well.

This is the island where you are certain to see a giant Galapagos tortoise. For most of us, the highlight of the Charles Darwin Research Center was a compound that houses six giant Galapagos tortoises, where tourists are allowed to interact with the creatures, as long as you don’t touch them or intrude upon their feeding platforms.

This is the best possible place for taking those ET look-alike headshots. There are plenty of giant tortoises on Santa Cruz and it’s not too difficult to see them in the wild on this island and elsewhere in the archipelago—and seeing one is a Galapagos must. The giant tortoise is, after all, the namesake of the islands. “Galapago” is the Spanish name for “saddle,” a reference to the saddle-like shell of these elephantine reptiles.

On Santa Cruz, we also saw finches, mockingbirds, flamingoes, and some pretty unusual vegetation in its highland area. Then, on our way to Isabela Island, we sailed through a whale sanctuary area, spotting both whales and dolphins.

Isabela, the largest island of the archipelago, is a land of beautiful volcanic landscapes. Here, besides more giant tortoises, we saw both the Galapagos penguin, which is the northernmost species of the penguin family and the only penguin living in the tropics, and the flightless cormorant, the world’s only other flightless seabird, a creature endemic to the Galapagos.

Fernandina Island, the westernmost Galapagos island, offered lots more of the flightless cormorant plus several colonies of sea lions, land iguanas, and the archipelago’s largest colony of marine iguanas, the only seagoing lizard in the world.

Iguanas are so plentiful in the Galapagos that you must watch carefully where you are stepping for fear that you might harm one. They hold perfectly still for you for long periods of time, so it’s easy to get splendid close-up portrait photos of them. Just as a close-up of the head of a giant tortoise looks like ET, a close-up of an iguana looks a lot like Godzilla.

Our last full day in the Galapagos was spent on Española (Hood) Island. While each Galapagos island that we visited was fascinating, Española was especially so. The scenic, crescent-shaped, white-sandy seashore at its Gardner Bay is perhaps the finest beach in the Galapagos. It’s designated an “open” site and I was able to wander anywhere I wished among the huge colony of sea lions, as long as I didn’t intrude upon any of the rocky or vegetation areas.

At Gardner Bay, I was able to leisurely follow and photograph a mother sea lion nudging along her baby that had been born that very day, leading her pup to its first visit to the sea. It was also here that a bull sea lion told me in unmistakably clear sea lion lingo that he had listened to my camera clicking once too often. Don’t argue with a bull sea lion—one can weigh up to 670 pounds, about six times the weight of a female sea lion.

The last hours on Espanola were overcast and there was light drizzle that eventually developed into some serious rain—the only time during the entire trip when the weather was less than perfect.

But even in less than perfect weather and under lighting conditions imperfect for photography, I found walking about the Punta Suarez section of Española delightful. I saw the red version of the marine iguana, Española being the only place in the world that has them.

I took still more photos of iguanas that appeared to be spitting at me (what they were really doing was expelling salt from their noses, this being nature’s way for them to rid their bodies of this toxic side effect of their saltwater environment). I saw lots of the bright red on top, blue on bottom Sally Lightfoot crabs and had the experience of having hood mockingbirds fearlessly come right up to me as if they wanted to introduce themselves.

Trailing along the high cliffs I saw colonies of masked boobies, blue-footed boobies, waved albatrosses, and many more, including perched along the cliffs some swallow-tailed gulls, the world’s only nocturnal gull.

A waved albatross waddles along sort of the way penguins do—and they look like what you might imagine offspring would appear if a penguin mated with a goose. They are huge, the biggest bird of the Galapagos—about three-and-a-half feet tall, with snouts that stretch six inches or longer. Española Island is the only place in the world where they nest.

The shiny white masked booby, so named because of a blackish area of skin that surrounds its bill (it also has black at the tip of its tail and edge of its wings) is the largest of the Galapagos boobies. It can be found on most other islands in the archipelago as well.

But it’s the blue-footed booby that’s the best known Galapagos bird. It really does have bright blue feet (there is also a red-footed booby, the smallest booby, whose feet are, of course, red, but not so brightly so). Male and female blue-footed boobies look nearly identical and are very difficult to tell apart. Females are generally just a bit larger, but the easy way to distinguish males from females (for us, that is) is that females honk and males whistle.

People who tour the Galapagos Islands on one of the better ships are likely to experience excellent guide service. Our Metropolitan Touring guide held a college degree in biology and environmental science, was a graduate of the rigid Galapagos naturalist guide course, and spoke perfect English. That’s the standard for a Level 3 guide. It’s wise to select a tour that guarantees Level 3 guides, as opposed to Level 2 guides who need only a high school education and far less English-language skills.

Besides extraordinarily good guide service, the main differences between a Galapagos Islands tour experience that is good and one that is truly outstanding are flexibility and options. Our tour operator was able to adapt its schedules to maximize our sighting experiences, and each day, it offered the option for passengers to do something different from the main program. Over the course of the trip, we each had the opportunity to swim among sea lions, go snorkeling, take a ride on a glass-bottom boat, or perhaps take a “panga” (small boat) ride along an intertidal zone. I did that one day and enjoyed getting very close up to some of those peculiar looking brown pelicans.

Just ponder some of what makes the Galapagos unique:

So much in this incredible archipelago is so different from anywhere else in the world—which is why world travelers have long agreed that visiting Ecuador’s Galapagos Islands is one of their favorite memories.

Information: Because the Galapagos Islands are a world-renowned travel destination, it’s easy to find a well-thought-of tour company that offers packages. If you have a favorite tour company, stick with them. Otherwise, do a web search and study reviews.

Best time to go: The Galapagos sit astride the equator, so the temperature is pleasant throughout the year. Odds of encountering overcast or rainy weather are greatest during January through March. Study a detailed guidebook in advance to determine how best to include those few species or spectacles that can be viewed only at certain times of the year.

Health and safety: Check to see if a cruise ship you’re considering will have a physician aboard. The best ones do. The Galapagos is considered a pretty safe travel destination. In Quito, Guayaquil, and other Ecuador cities, petty theft is a serious problem, and using a safety pouch to protect money and other valuables is highly recommended.

Photography: If you are thinking of upgrading your camera equipment, you would greatly enhance your experience by doing it before, rather than after, your Galapagos visit. Take the time to check out a couple of good photography books that explain nature photography. Highly recommended are “Understanding Exposure” by Bryan Peterson, and “The Nature Photographer’s Complete Guide to Professional Field Techniques” by John Shaw, both published by Amphoto Books.

What should you pack? A first-rate tour operator provides its clients with a comprehensive checklist of what to bring and not to bring. Don’t forget binoculars and sunscreen or motion sickness medication if you have a problem with traveling on boats.