Demand by Rich Chinese for US Surrogates on the Rise
0 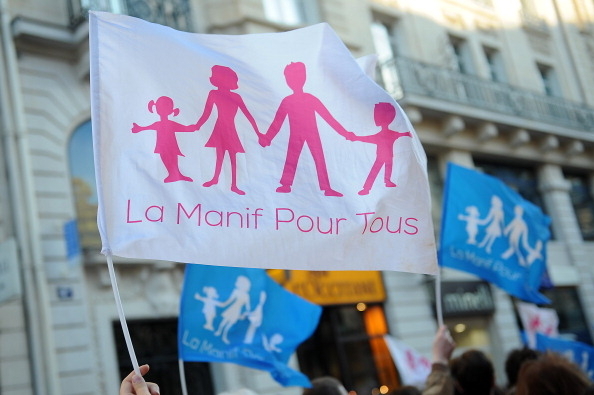 PARIS, FRANCE - APRIL 23: Anti-same sex marriage activists of the anti-gay marriage movement 'la Manif pour Tous' protest during a demonstration, a few hours after the French Parliament adopted gay marriage law at the Assemblee Nationale on April 23, 2013 in Paris, France. The bill was approved by a vote in Parliament of 331 to 225. (Photo by Antoine Antoniol/ Getty Images)
Europe

PARIS–The French “La Manif pour tous” (Protest for All) movement has gathered 100,000 participants in Paris and Bordeaux on 6 October 2014. This movement, established in 2012, shows the face of a traditional France attaching great importance to the family.  The people often don’t recognize themselves in the proposals of the government.  Last week, Prime Minister Manuel Valls wanted to reassure, and affirmed to be opposed to gestational surrogacy, a practice of “commercializing human beings and merchandising the female bodies”, something intolerable, according to his own words. France also plans a global initiative to get a ruling among the states.

Do Not Touch the Intimacy and the Beliefs

Last weekend, “La Manif pour Tous” has once again shown the sustainability of the movement and its supporters.  Established in November 2012, in reaction to the Taubira law on marriage between persons of the same sex, the movement has grown to a reach that no sociologist or political scientist could have predicted: six large protests, including two that gathered around one million people. With this last rally, the government seems to have understood the message coming from a solid base of the population, defending a “natural” family pattern as the foundation of French society.

This is the card of appeasement PM Manuel Valls played a few days before the rally, admitting he had changed his mind on gestational surrogacy, and recognizing in the public debate the virtue of having evolved government positions. “I think we cannot go towards this kind of procreation that would question our values and principles,” declared the Prime Minister during a press conference in Matignon office. He explained his thinking to the newspaper La Croix: “Family and ethical issues are serious matters that affect intimacy and beliefs.”

The gestational surrogacy and the assisted reproduction for people of the same sex, were actually underlying effects of the first piece of legislation on marriage for all sexes in 2012.  What belonged to the natural state of a human being would be legislated by political ideas. That is why, considering the public outcry that started two years ago, and thanks to a deeper debate, the government is now strictly opposed to the legislation of gestational surrogacy.

“In a world where everything can be bought and sold, where values and principles are not sufficiently coordinated, it is the law’s duty to define limits, to guarantee the base of principles that organizes society’s life,” the Prime Minister declared.

An Ethical Question on International Ruling

In June 2014, the European Court of Human Rights condemned France for refusing to automatically transcribe the parentage act for children born overseas from gestational surrogacy. France didn’t appeal, but insisted that its national legislation could not be questioned by acts committed abroad.

For PM Manuel Valls, states have the responsibility to fight against the commercialization of human beings. A political initiative will thus get started at international level by the French Foreign Affairs Minister Laurent Fabius, aiming to forbid gestational surrogacy to French citizens abroad. This is an important ethical question for the protection of children, and the fight against merchandising the human body, which must be the heart of concerns of the international community, according to the Prime Minister.

France is indeed a pioneer in the field of medical ethics within its borders, but has no legal means to enforce this law on French citizens travelling abroad.

For 60 years, the evolution of medical science has far exceeded the limits of its ethical and legal framework, and trafficking networks of the human body appeared at the same time.

“Farms” of surrogate mothers appeared in India, taking advantage of the poverty and distress of women who became pregnant machines. In South America, the Philippines, Pakistan, and in Kosovo, an organ mafia has developed run by organized crime. In China, organs of prisoners of conscience are being harvested in the basements of military hospitals on a large scale. This highly lucrative business rekindles transplant tourism worldwide.

The merchandising of the human body opens up a world in which man, as the saying goes, “is a wolf to man”, and would amount to the financial sum of his organs, thus excluding the foundations of a civilization:  an indivisible and unique soul for all its citizens, respecting values and ethical principles, and moral foundation for generations to come.