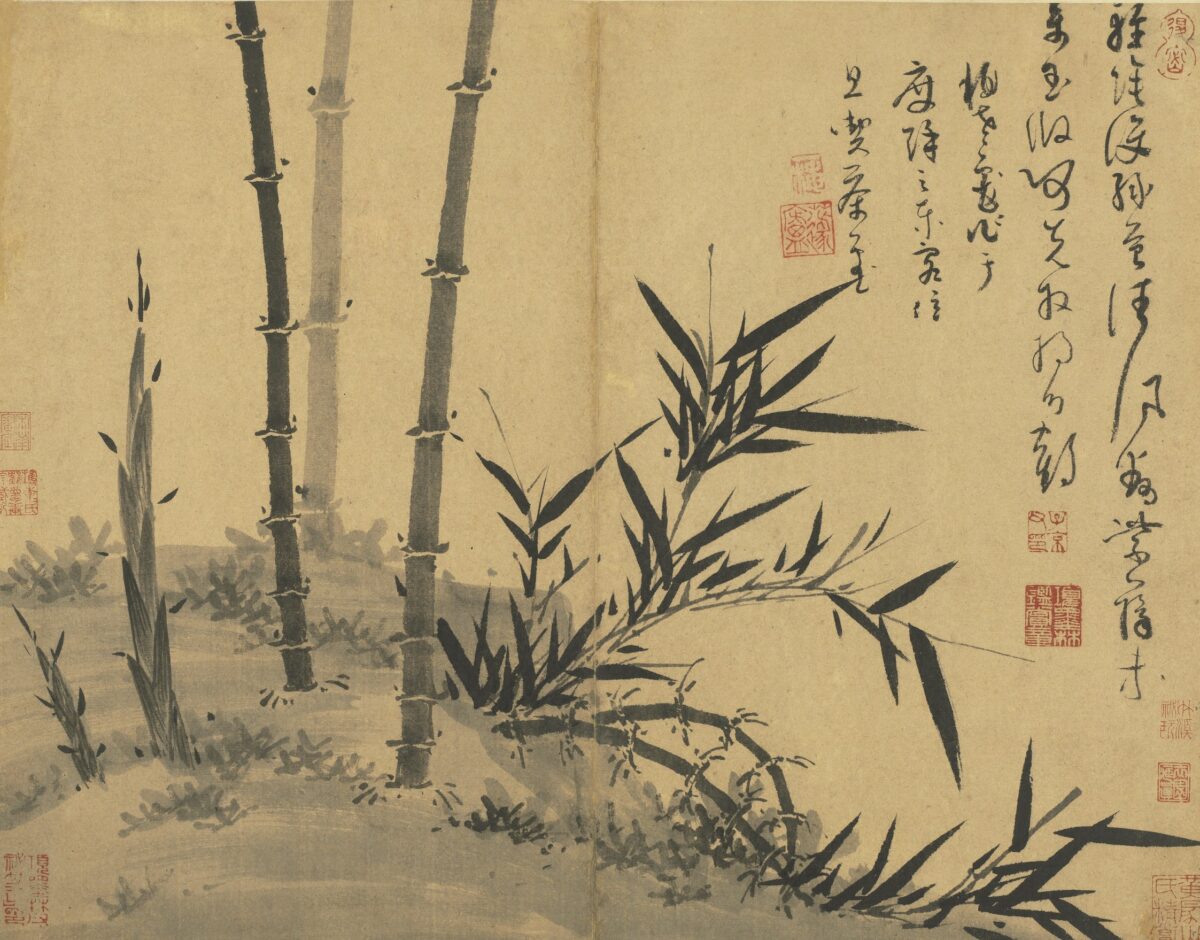 The ‘Four Gentlemen’ and Their Poetic Inscriptions

Nature serves as our greatest artistic muse. It stirs feelings and emotions in us and was a source of inspiration for ancient Chinese artists. Four plants—the plum blossom, the orchid, the bamboo, and the chrysanthemum—were known as the “Four Gentlemen,” or “Junzi” in ancient China.

Ancient Chinese artists depicted this flora to evoke intellectual thought and spirituality rather than simply portray the beauty of the natural world. Each of these plants personified the ideal qualities of a gentleman in ancient China. The artists combined their painting with calligraphy and poetry, known together as the “Three Perfections.”

The ancient Chinese praised the plum blossom for its ability to bloom vibrantly through the winter snow. While most other plants hibernate in the fall, the plum blossom prepares itself to bloom before other flowers and is seen as a harbinger of spring. This plant isn’t particularly eye-catching, but it is considered a symbol of inner beauty and strength while under adversity.

Wang Mian (1279–1368) was a Yuan Dynasty painter known for his ink plum paintings. His paintings incorporated a calligraphic inscription over a flowering plum branch. In his poem “Plum,” he wrote:

Here, Wang praises the virtues of the plum blossom. It does not use bright colors to seek praise or please people; it wishes only to leave a subtle fragrance in the world. The petals are made with light dabs of ink to convey inner purity. Although it is not striking on the outside, the plum blossom is shown with a splendid and dignified inner life.

This plant is much like the artist. Wang grew up in a poor family, but he studied hard to make a name for himself in poetry and painting. He was not able to pass a civil service exam that would guarantee a steady income, and he later rejected several other civil appointments. Retiring to the mountains where he made his living by painting, Wang built a plum blossom retreat and planted a thousand plum trees around it. He compared himself to the plum blossom, as being someone who triumphs over harsh conditions and doesn’t seek fame.

The orchid is delicate and fragile. Its flowers bloom with elegance and grace in the spring, and its blossoms are exquisite yet never overbearing. They often grow in hidden and secluded places emanating a faint, delicate fragrance. With these characteristics, the orchid embodies simplicity, solitude, humility, and nobility.

“I’ve always bowed my head and asked Emperor Xi,
What are you doing in this township?
Before starting to paint the nares open,
And the sky is full of antique fragrances.”

The piece was created in response to the Mongolian army’s conquering the Southern Song Empire. Being loyal to the Song, Zheng rejected Mongol rule by signing the painting as “Southern-facing old man” who never faced the Northern Mongolian court.

The orchid embodies someone of noble character, such as Emperor Xi, a legendary king and ancestor of ancient Chinese civilization. It is depicted without roots and seems to be displaced from the soil. When asked why that is, Zheng said, “Don’t you know that the land was stolen by the barbarians?” The “antique fragrance” suggests a wistful nostalgia for the motherland.

Seeing himself as the rootless orchid, the artist conveyed that he was without a home after the fall of the Song Empire. Yet he remained a patriot with noble integrity, without anger or hatred. The question he posed in the poem heightens his sadness, as he felt out-of-place.

The bamboo was admired by the ancient Chinese for centuries. The bamboo stalk stands straight and tall, representing uprightness and integrity. Yet the inside of the stalk is hollow, symbolizing endurance and tolerance. Although the bamboo grows straight, it bends and sways in the wind. It is strong and agile, making it a symbol of resiliency—of being able to recover quickly from difficulty.

Wu Zhen’s (1280–1354) Yuan Dynasty pictorial series, “Manual of Ink Bamboo,” features paintings depicting bamboo in different poses and stages: from tender shoots to old stalks, some upright and strong, some supple and bending down. The bamboo is also portrayed reacting to wind, rain, and snow, showing its adaptability. Each painting includes an inscription that describes the virtues that the bamboo plant symbolizes, rather than its actual features.

In this poem, Wu wrote:

“When the trees shake and drop their leaves,
This gentleman remains particularly green.
With moral integrity and its mind more modest still,
It cherishes solitude to keep its nature intact.”

Here, Wu personifies the bamboo as a gentleman who maintains his moral integrity in the face of adversity. Wu expresses admiration for bamboo’s resiliency and modesty. Despite external pressure, this plant still preserves its true nature.

In another poem, he wrote:

“The bamboo stands upright in the frost,
Its shadows are slim and graceful under the moonlight.
If you understand the principle of self-effacement,
Then what matters will still weigh on your mind?”

Wu invokes self-cultivation in this poem. Bamboo likes to grow in lofty mountains away from the world; it is content and carefree in its reclusiveness and uninterested in worldly affairs. It does not seek attention and is indifferent to fame and gain. By letting go of such desires, one will be at peace with oneself.

Praised for its exquisite beauty, the chrysanthemum was a favorite flower of the ancient Chinese. Its blossoms thrive in the chilly autumn air while other flowers start to wilt. It doesn’t compete with other flowers, yet it outlasts them all, giving it an enduring elegance. The long lifespan of the flower represents living a life full of vitality.

The chrysanthemum was beloved by Tao Yuanming (A.D. 365–427), a well-known poet during the Six Dynasties period. Although Tao appreciated the autumnal beauty of chrysanthemums, he liked their therapeutic properties even more, as he would mix its petals in wine to make a longevity potion. In his fifth poem, “Drinking Wine,” he wrote:

“I built my house near where others dwell,
And yet there is no clamor of carriages and horses.
You ask of me, “How can this be so?”
When the heart is far, the place of itself is distant.
I pluck chrysanthemums under the eastern hedge,
And gaze afar towards the southern mountains.
The mountain air is fine at the evening of the day
And flying birds return homeward together.
Within these things there is a hint of Truth,
But when I start to tell it, I cannot find the words.”

This poem expresses the poet’s contentment in a rural setting. Tao served as a government official when he was young to support his parents. When he saw the government’s corruption, he withdrew from civil service and retreated to a pastoral life, surrounded by the beauty of the natural world.

The “hint of Truth” that Tao speaks of in the poem is the fleeting nature of life. Riches and influence don’t go with us when we die. Tao tells us that life is ephemeral, and desolation sets in at old age. He expresses the truth of living a simple life free of worldly desires, while picking chrysanthemums near the mountains.

Even a place full of people and commotion will feel distant when the heart is unshackled from the world. Integrating emotion and reason, Tao’s poem conveys that his tranquil state of mind is in harmony with nature, yet he “cannot find the words” to express this contentment.

The “Four Gentlemen”—the plum blossom, orchid, bamboo, and chrysanthemum—showered insights and beautiful thoughts on ancient artists and poets to inspire their paintings and poems, for the world to enjoy.