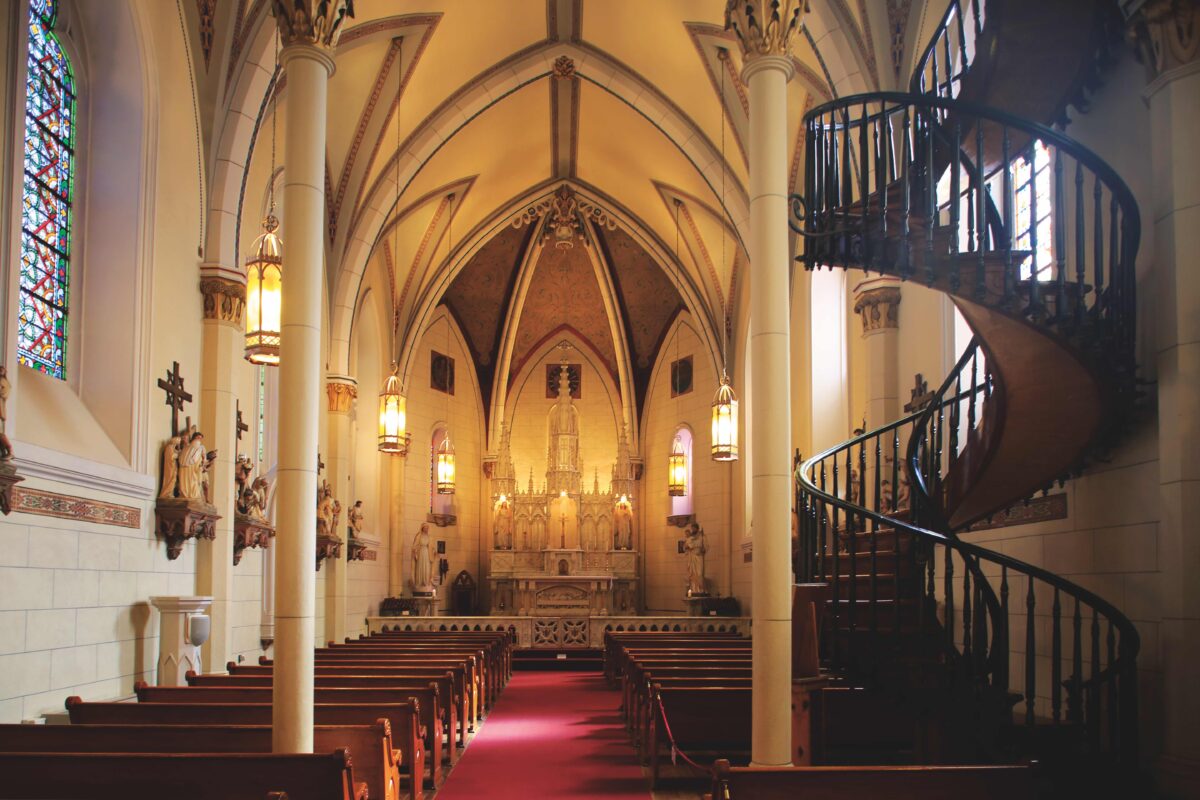 Here we reveal the mysteries of the spiral staircase inside the Loretto Chapel
BY Fu Yao TIMEMarch 15, 2022 PRINT

The spiral staircase of the Loretto Chapel is well known as a miracle because of its unique structure. It is located in Santa Fe, New Mexico, and is a Gothic Revival style building with a mix of French spire and stained glass. It looks elegant like the Sainte-Chapelle in Paris, just smaller. The construction of the Chapel took almost six years to complete. The architect, Antoine Mouly, passed away in 1878 when the chapel was near completion, leaving the Sisters at the chapel no way to access the choir loft.

The Sisters called in the local carpenters for advice. All the carpenters agreed that given the small space inside the Chapel, a staircase would overwhelm the interior design and detract from the layout. They suggested that a ladder would be a better fit. The sisters threw away the idea as their robes were not suited for ladders. It also wasn’t decent given that the chapel was a sacred place.

Legend has it that to find a solution to this problem, the Sisters of the Chapel prayed to St. Joseph, the patron saint of carpenters and on the ninth and final day of prayer, a man arrived at the door claiming that he was a carpenter by trade.

The carpenter worked under the condition that he was left completely alone. Three months later, the carpenter left quietly, leaving not a trace. He built an elegant spiral staircase with 33 treads, symbolizing Jesus’s 33 years of life in this world. The staircase makes two 360-degree turns from the ground to the loft. Not only was it space efficient, the style fit closely with that of the chapel. The Sisters said that the carpenter used very few basic tools – rectangle rules, saws and some hot water. And he completed it all by himself.

On the grand opening of the Loretto Chapel, everyone came to spectate, including the carpenters who had been shaking their heads. As professionals, they noticed at first glance that this spiral staircase was out of the ordinary. Spiral staircases normally need a central pillar to carry the weight; just like how a house needs a central beam to support the roof. Otherwise there will be a risk of collapse. But this one, with two 360-degree turns, has no central pillar and no other place to lend its weight. It looked like it was floating in the air.

What was even more amazing was that not a single nail could be found in the staircase. Initially, the stairs had no rails. The whole thing looked like it could have grown from the ground like a tree. After installing railings, walking up the stairs felt quite safe and the stairs felt very sturdy apart from the bounce the staircase had. Even with 12 choir singers standing on the stairs, the structure has no problem accommodating their weight.

Since then, many architects and professional carpenters have come to see it, but no one could explain why the staircase, that lacks a central pillar and is not secured with nails, works. The spiral staircase in the Loretto Chapel became famous and later became known as the ‘magic staircase.’

The most important feature of mortise and tenon woodworking is that no matter how big the structure is, be it a palace, a nine story pagoda or a bridge connecting the two banks of a river, all the parts are connected by mortise and tenon, without a single nail, from head to toe, inside and out.

Why is it stronger without nails? Let’s take a look at what the mortise and tenon structure looks like.

We can see that the joints in mortise and tenon structure are angular, not round, because this is the only way to prevent the wood from twisting, thus keeping the structure stable. Nails are cylindrical, and the rate of expansion of the metal differs from that of wood. Over the course of a few years, after the nails and the wood each undergo expansion and contraction, the nails will start to loosen and the wood will twist, thus deforming the structure.

Nails are also prone to rusting. A piece of good wood can last for hundreds of years but unfortunately, nails won’t last that long. If nails are used, after a certain period, the wood may still be intact, but as the nails rust and deteriorate, the whole structure may fall apart.

Therefore, the magic of this spiral staircase can be easily explained with the mortise and tenon structure. For example, a simple dovetail joint can be used to make a stair tread without nails.

Human beings have been using mortise and tenon structures for a long time. The earliest discovery was at the site of a 7,000 year old well in Leipzig, Germany. In China, the ingenious mortise and tenon structure was developed and used by Lu Ban, during the Spring and Autumn period 2,600 years ago. The amazing thing is that the ancient craftsmen had no knowledge of three-dimensional geometry, let alone the physics involved in building, yet they were still able to design such structures that perfectly matched the principles of mechanics. The wisdom of the ancients is beyond our imagination.

Most ancient Chinese architecture is made from wood, which is why the Chinese mortise and tenon technique is so advanced. This style of architecture is also in line with the Confucian style of being subtle and astringent; following the yin-yang theory of control and balance; implying the Taoist theory of mutual generation and restriction; seeking the realm of “unity of heaven and man.” Older western architecture mainly used stones as the main building material. Carpentry was only responsible for ceilings and furniture. So the Western tradition of using the mortise and tenon is relatively simpler.

The carpenter who built the Loretto Chapel staircase, displayed excellent curved woodworking skills when designing and building the staircase. Using the properties of a spring, the staircase naturally has a restoring force when it is stretched or compressed, counteracting the pressure which occurs when a person steps on it. It gives the structure a certain degree of flexibility. The structure allows itself to be temporarily deformed when impacted by external forces, reducing the pressure and thus protecting the whole structure from being damaged.

Another example is the Pagoda of Fogong Temple in Shanxi province, the oldest wooden pagoda in the world. It has five levels but reaches the height of 221 feet, almost as tall as a 20 story modern building. However, it is made with only 54 bracket arm style mortise-and-tenon joints, without a single nail. It was built in 1056, almost 1,000 years ago, and has survived many earthquakes and even a shelling in 1926, but the tower has never tilted, which is incredible.

In ancient times, when people were fond of things that lasted long, the mortise and tenon structure played an important role in the construction and furniture industry. The craftsmen were so skilled that they were able to control the precision to within 0.004 inch, producing a seamless piece of work that was also sturdy enough to be passed down as a family heirloom. But it takes years to hone this skill, and in today’s fast, instant culture, few people are willing to pass it on.

People say that nowadays technology is so advanced, bringing us more and more convenience; things are changing so rapidly that we have to always keep up with the trend. Buildings over 30 years of age are old enough to be torn down and rebuilt. For furniture, if they can last for 8 to 10 years, that’s good enough. We can always buy new ones. Quality is not of a huge concern for us as we are not looking for something that can last forever. But when everything around us is only temporary because of the “convenience” this modern society has brought, are our hearts are no longer at peace because of the restlessness of this world? And if our hearts are restless, where does happiness come from?

Whoever built the spiral staircase at Loretto Chapel was a master of mortise and tenon joinery. Unfortunately, his great skill was not passed on in North America, only leaving this amazing woodwork for posterity, for us to admire and appreciate.