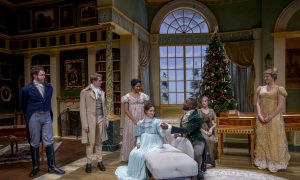 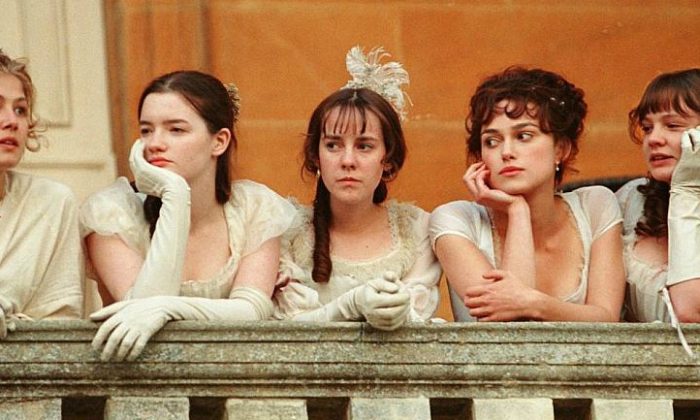 A portrayal of the Bennet sisters in the 2005 film “Pride and Prejudice.” (STUDIO CANAL/FOCUS PICTURES/WORKING TITLE FILMS)
Literature

Writer Andrew Davies, who has won general acclaim for his television adaptations of historical novels, including most famously Jane Austen’s “Pride and Prejudice,” has complained in a new BBC 4 documentary that “it is now ‘compulsory’ to have a leading lady capable of fending for herself,” and “jokes that he now finds himself ‘pleading’ to write a ‘really droopy, soppy girl’ just for a change.”

It is incredible that an artist who has produced such excellent, sympathetic work—who has actually read the works he adapts, unlike Sarah Phelps, who adapted Agatha Christie’s “ABC Murders,” replete with ahistorical profanity, for the BBC—should find himself under the cosh of political correctness, with demands that he should fly in the face of the intentions of those who wrote the originals.

It is one thing to rescue from obscurity historical female figures who should be more widely known, but rewriting fact is a much more political pursuit, and rewriting classic fiction verges on churning out propaganda.

Female characters in historical fiction largely played a domestic role, but now feminists would claim that this was not out of choice. They would, campaigners insist, have chosen a more active role in public affairs, in preference to having a husband and children. However, the signs are that despite all the best efforts of our social engineers, most women would still prefer to spend more time in the domestic sphere.

Unable to change the minds of women and, despite their obsession with “choice,” unwilling to allow them choice in case they choose the “wrong” thing, faux feminists have turned to demanding the rewriting of historical fiction—to produce works that they feel should have been written rather than trying to understand why they were written as they were.

As so often they are looking at history through the wrong end of the telescope, finding their own present-day preoccupations in completely different times.

Sadly, Andrew Davies has not adapted Jane Austen’s “Mansfield Park” for television, and it is unlikely that it will ever be adapted in view of its heroine’s perceived “droopy, soppy” character—unless, of course, Fanny Price could be re-imagined as a feisty 2018-style Amazon parachuted into the early 19th century, who learns to kickbox, takes revenge on Aunt Norris, frees the slaves who provide her uncle’s wealth and then runs off with it, accompanied in an uncivil partnership with Henry Crawford, the most unreliable man in the novel. Despite all this, we would be expected to imagine her living happily ever after.

And yet Jane Austen has created a much more realistic heroine, who actually wants to do the right thing even when it clashes with her romantic desires, and whose love for her cousin Edmund is tested beyond destruction as he confides to her his feelings for Crawford’s thoughtless sister Mary.

Modern-day “feisty” heroines are more fantastic in the sense that not only do they not exist but also that they cannot exist. Unlike Austen’s heroines, depicted within a network of families and friendships, and supported by a framework of coherent religious beliefs, they are imagined as individualists who put themselves first and yet somehow achieve happiness regardless of everyone else’s happiness.

They more closely resemble Marianne Dashwood of “Sense and Sensibility,” who is shown by Austen as always putting her own feelings first, and in her passion for the faithless Willoughby, tramples on the feelings of the loyal Colonel Brandon. And meanwhile, her much more realistic sister Elinor suppresses her own feelings and possible desire for revenge on a rival out of the true love she feels for Edward Ferrars.

The “new heroine” who does everything for herself does not need a man, and thus she acts as a symbol of modern feminism rather than an expression of what real women actually want.

In fact, far from raising “ordinary” women’s esteem, such heroines function as a criticism of any woman who is unpaid, her achievements consigned to the dustbin of history merely because they take place in the domestic sphere. Few men, hitherto, could get away with such a blatant insult. But now such views are becoming mainstream.

However, in replacing the truly feminine heroine with an updated swashbuckling version, the faux feminists would simply replace one stereotype with another—and their new stereotype looks less like a heroine and more like an antihero.

This article has been republished under a Creative Commons license from MercatorNet. Ann Farmer, who lives in the UK, is the author of several books.