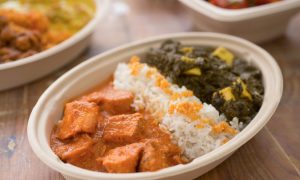 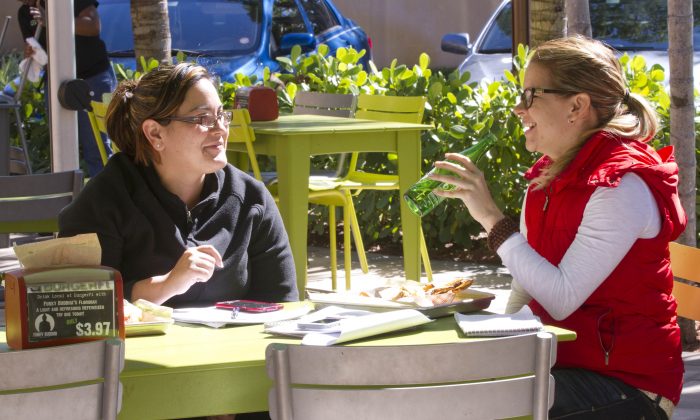 In this Tuesday, Jan. 27, 2015 photo, Sasha Rodriguez, left, and Adriana Olivieri dine on the patio at the BurgerFi restaurant in Aventura, Fla. Companies such as the gourmet hamburger chain BurgerFi plan to nearly double in size from their existing 65 restaurants this year. (AP Photo/Wilfredo Lee)
Food & Dining

This week, the food industry research firm, Technomic, released its annual report on the country’s top 500 chain restaurants. It found that though the top chains were still dominated by big fast-food companies like McDonald’s (no. 1), Subway (no. 3), and Wendy’s (no. 5), their sales declined in the past year. Meanwhile, fast-casual restaurant chains—places that offer high-quality food over the counter—increased their annual sales by almost 13 percent, totaling $30 billion in 2014.

But you might scratch your head when you hear their names: top of the list is Pieology, a pizza chain—which increased its sales by 230 percent compared to last year, to reach $44.6 million. At the build-your-pizza chain, customers can pile as many toppings as they wish onto one pie for one set price. Among the different options are a variety of cheeses—mozzarella, ricotta, parmesan, feta, or gorgonzola—and vegetables like banana peppers, basil, and artichokes. There’s even an option for a gluten-free crust, and a dairy-free version of mozzarella—definitely not your typical pizza joint.

Number two is PDQ, which stands for “People Dedicated to Quality.” Its sales increased by 119 percent last year. The chain specializes in “hand-battered” chicken tenders. The company—which first started in Florida in 2011 and has since expanded to six other states—also boasts hand-spun milkshakes and house-made sauces and dressings.

Number three is BurgerFi, which grew 111 percent in the past year. Self-described as “less burger joint, more five-star restaurant,” the chain says it never uses microwaves, freezers, or heat lamps on their food. They serve burgers with grass-fed, antibiotic- and hormone-free beef, and real-meat hot dogs (Kobe-style beef, chicken apple, or Vienna beef). Their gourmet toppings include grilled onions cooked in a “thyme and merlot” reduction.

In keeping with their health- and environment-conscious vision, their restaurants even use furniture made of recycled soda bottles and wooden shipping material.

At number five is The Habit Burger Grill, whose burger was rated the country’s best-tasting burger in Consumer Reports’ 2014 reader survey. They grew by 46 percent last year. The company went public last November, raising $90 million on its first day on the stock market.

Technomic’s executive vice president Darren Tristano explained why these lesser-known fast-casuals made such remarkable growth amid the crowded and competitive restaurant industry.

“The winning formula of high-quality menu items in upscale settings, with high-touch service at prices between fast food and casual dining, can be applied to any kind of food and is powering growth in segments from burgers and barbecue to sushi and pizza,” Tristano said in a press release. “We’ll continue to see fast casual drive much of the sales growth in the restaurant industry for years to come.”

Perhaps you’ll see one of these companies open a restaurant near you soon.