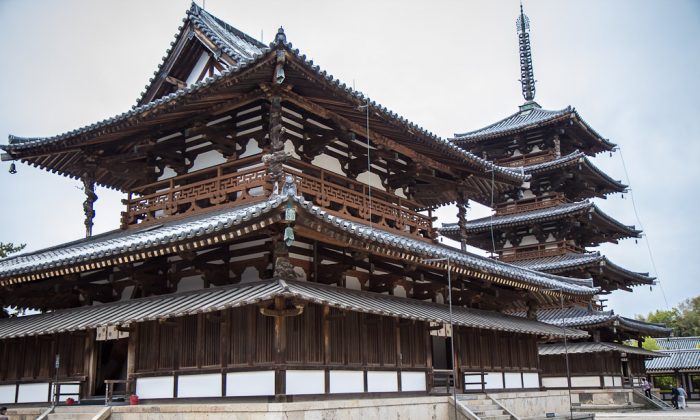 The Fascinating Origin of the World’s Oldest Wooden Structure

Looking at floor after floor of the splendid outstretched roofs of the Horyu-ji Temple pagoda in Nara, Japan, it is hard to believe that this is the oldest wooden structure still standing in the world today. The five-story Buddhist building dates back to around the early 600s. For a wooden structure from a period that remote, we might expect something small and box-like to be all that’s left, after ages of wars and weathering away. What’s the secret behind this grand tower’s longevity?

It all began with Prince Shotoku (A.D. 574–622), who served as regent for the young Japanese Empress Suiko. He sent messengers across the sea to China to learn from their rich and advanced civilization, the same civilization that today is associated with the golden age of Chinese history, the Tang Dynasty.

Prince Shotoku’s constitution also was the fertile soil that allowed for the growth of Japanese culture.

The result was the importation of Buddhist ideals and ancient Chinese arts and architecture, which are perfectly displayed in the Horyu-ji Temple and its pagoda. Prince Shotoku himself commissioned them and, as the first Japanese ruler to encourage Buddhism, became known as the father of Japanese Buddhism.

In his famous 17-article constitution from A.D. 604, Prince Shotoku wrote, “The three treasures, which are Buddha, the [Buddhist] Law, and the [Buddhist] Priesthood, should be given sincere reverence, for they are the final refuge of all living things. Few men are so bad that they cannot be taught their truth.”

This spirit of reverence for the divine remains in Japan while everything else seems to have weathered away with time. Indeed, Japanese people today practice Buddhism more than any other organized religion.

Why Has Horyu-ji Temple Pagoda Survived?

Yet there is even more to this story. Such ancient wooden buildings have almost completely disappeared around the world, often at the hands of conquering armies who destroyed everything in their paths, or probably more often from a lack of maintenance.

The achievement then is in a society strong and stable enough to protect itself from invaders and organize itself in a way that can support the preservation of cultural treasures like Horyu-ji Temple. How did the Japanese manage this?

Again, we turn to Prince Shotoku’s crucial constitution. Besides encouraging Buddhism, it encouraged Confucian values, like harmony, loyalty, and propriety. Most of the articles in the constitution provide clear, simple, and powerful moral guidance for the people: “Harmony should be valued and quarrels should be avoided”; “Do not fail to obey the commands of your sovereign”; and, “Do not be jealous!”

The emperor symbolized the Japanese government and state, which was to be treated “like Heaven, which is above the earth,” according to the constitution. This kind of strong government, supported by a loyal and obedient people, kept invaders out, and official commands to maintain cultural treasures were respected and upheld.

Additionally, Prince Shotoku’s constitution not only provided guidance for the common people, it also provided a wealth of guidance for Japan’s rulers, such as, “Punish the evil and reward the good”; “Deal impartially with legal complaints submitted to you”; and, “The ministers and officials of the state should make proper behavior their first principle”—to name only a few. In this way, the rulers were fair and worthy of people’s loyalty and obedience. This naturally protected the government and religious leaders—and the buildings they valued—from uprisings.

Prince Shotoku’s constitution also was the fertile soil that allowed for the growth of Japanese culture during the following period of history, the Heian Period (A.D. 794–1185), which is regarded as Japan’s cultural golden age. This is when the royal court and its many courtiers were allowed to develop a rich heritage, including elaborate etiquette; elegant 12-layer robes; beautiful literature, like the “Pillow Book of Sei Shonagon”; and poetry that would later evolve into the haiku. These have become part of Japan’s national identity and the natural pride that Japanese feel for them and the good morals that they represent have helped to stabilize Japanese society.

Gazing at the Heian Period’s cultural treasures and the Horyu-ji Temple pagoda, we can see the lofty and majestic wonder of antiquity, which may be grander than our modern minds might first expect. Peeling away the surface, we find they flow directly from eternal values and good morals embodied in places like Prince Shotoku’s constitution.

The articles of the constitution may seem simple, but that may very well be their magic. It’s a thought worth contemplating. Just ask yourself this question: Is the culture we are creating today strong enough to survive for 1,500 years?

Evan Mantyk is president of the Society of Classical Poets and an English language arts teacher at Fei Tian Academy of the Arts in upstate New York.