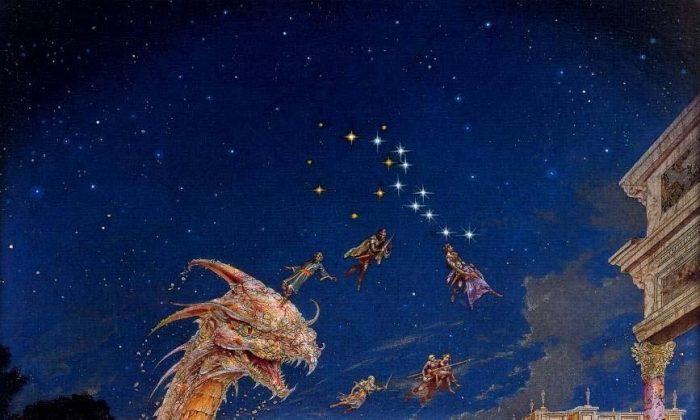 James Gurney, "Dinosaur Parade." Oil on canvas mounted on panel, 24 in x 48 in. (Courtesy of the artist)
Arts & Culture

The Fantastical World of Imaginative Realism

Fantasy art is one of the most misunderstood categories of the contemporary realist movement. It is normally discredited as mere illustration since much fantasy art is created for novels and books. However, until recently, most realist art was denigrated in the same fashion.

Critics claim that figurative work is only illustration, but in truth, there is nothing simple about illustration or fantasy art.

Although there are plenty of great examples of this genre used as illustrations for books, fantasy art takes every bit as much imagination, skill, and understanding of technique as other forms of painting. There are also a large number of fantasy artists who choose to paint surrealist and nonexistent subject matter without a specific commission for a book in mind, but simply out of a love for creating subject matter that doesn’t exist in the real world.

Science fiction, fantasy, and magic realism, is a huge genre in movies and literature, why should it not be the same with painting, drawing, and sculpture?

Accepting this imaginative style of art as a legitimate form of human expression will broaden the types of subjects mankind can explore. And the artist’s ability to abstract the subject through the realist human form and recognizable imagery may enable the viewer to understand emotions and themes in the real world. What matters is the work’s ability to communicate the human condition.

Groups such as the Association of Fantastic Art have formed to support endeavors that delineate differences between fantasy art, science fiction, and what is called imaginative realism.

The association’s founders, Patrick and Jeannie Wilshire, represent one such group.

“Imaginative realism, a term coined by ARC Living Master James Gurney, illustrator of the famous children’s book ‘Dinotopia,’ is increasingly used to provide an inclusive but clear delineation of this artistic school,” according to the Wilshires.

“‘Fantasy art’ can be an extremely broad term, and yet at the same time can be exclusionary, as in ‘fantasy art’ versus ‘science fiction art.’ ‘Imaginative realism’ clearly denotes traditionally created imaginative subject matter, handled in a realistic and narrative style, regardless of the specific treatment or thematic content, and at the same time clearly denotes the field’s link to the classical realists of the past.”

Gurney defines imaginative realism as “a convincing portrayal of something that cannot be observed directly.” This brings us to another important point. What is so bad about good illustration?

During the 19th century, the best illustrators of the day, such as Arthur Rackham, Edmund Dulac, and Elanor Fortescue Brickdale, were revered as great artists. Norman Rockwell, the most famous of American illustrators, was not only successful during his day, but today his major works are worth millions.

“One thing that we like to say in our lectures, is that there is no such thing as an illustrator. An illustrator is just a painter who tends to have publishers for clients, just as other painters have galleries, collectors, or patrons as clients,” the Wilshires point out.

Contemporary realist illustrators get a bad rap because of the negativity associated with the term. Although not every illustrator is good, the best are great artists. This is the same with portrait artists, landscape artists, and any other division of figurative art.

Modernists have used the word “illustration” to denigrate all figurative art, which was why the word got its negative association in the first place. They called works by John William Waterhouse, Edward Burn Jones, and Edmund Blair Leighton illustrations because the works showed us, through recognizable imagery, scenes from famous stories of the day.

Actually, every figurative work is illustrating something. Even religious paintings from the past are illustrating the life of Christ or scenes from the Bible. Illustration is how we communicate through realistic images by painting a picture that captures thoughts and emotions.

Today there is a growing group of artist, collectors, and fans of this imaginative realism, based on the techniques of the past, but with modern imagination.

This year, the Association of Fantastic Art (AFA), in coordination with the Allentown Art Museum in Pennsylvania, will put on a groundbreaking exhibition: “At the Edge: The Art of the Fantastic,” from June 3 through Sept. 9

Continued on next page: Dinosaur Parade …