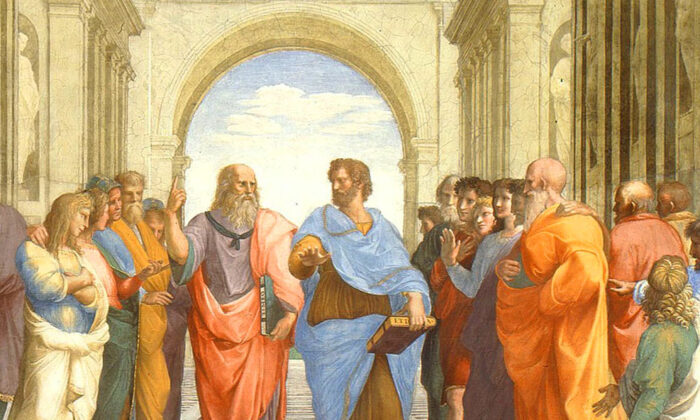 The Eye of the Beholder: Reflecting on the Purpose of Beauty and Art

Plato and the Liars
By Eric Bess
biggersmaller
Print

We’ve all heard the phrase “Beauty is in the eye of the beholder,” but what does this mean and does it hold weight? In this series, we’ll take a casual look at the philosophical debates concerning our experiences with beauty and art. Through questions and reflection, we hope to gain a deeper understanding of beauty and art and their place in our lives.

In the Republic, Plato argues that representational artists (poets, painters, musicians) are liars and should be censured or expelled from the perfect republic. Socrates, the protagonist in Plato’s writings, says:

“It seems then that if a man who in his cleverness can become many persons and imitate all things should arrive in our city and want to give a performance of his poems, we should bow down before him as being holy, wondrous, and sweet, but we should tell him that there is no such man in our city and that it is not lawful that there should be. We would pour myrrh on his head and crown him with wreaths, and send him away to another city.”

Why does Plato consider representational artists liars, and why does he seek to censure them or expel them from the ideal state? In order to understand these questions, we must briefly examine what Plato means by Truth.

I always consider Truth for Plato to be the ideal that the divine creator has put in our minds. Let’s engage in a thought experiment to better understand this idea: Close your eyes and imagine the perfect human being. What do they look like? How do they sound? How do they behave? How do they treat other human beings? How do they think and feel? Put forth the effort to make this ideal person possess no imperfections. It’s more difficult than it may initially seem.

This perfect human being we just imagined exists not here on earth but only in our minds, hence our minds have access to a higher truth otherwise absent from the world, and this higher truth is more real and true than the world itself.

The artist, however, according to Plato, does not access these higher truths but simply copies the things in the world. For instance, the artist doesn’t need to know anything about a perfect human being in order to paint a human being; instead, the artist only needs to know the techne or craft of painting.

Artists have a lot of power in their ability to influence the public, and this is why the artist is so dangerous: the artist, having not accessed higher truths, may educate the public in dangerous and harmful actions, emotional states, mindsets, and so forth. Plato uses Homer’s depiction of the Greek gods and heroes to illustrate this point. The Greek gods and heroes are often depicted engaging in violence, rape, rage, or vengeance.

Let’s engage in another thought experiment in which we imagine what this might look like today. Imagine we want a society in which our neighbors, our kids, our spouses, and our communities as a whole are centered around selflessness, honesty, compassion, and goodness. Would we want music, paintings, movies, and literature that highlight greed, lust, violence, and evil? Would we take the opportunity to censor those things that might encourage mindsets, emotions, and actions detrimental to our guiding principles as a society? Plato would say yes.

Some suggest that Plato’s ideas on censorship and the pursuit of the ideal state are dangerous. We can look at the Nazi party for examples: the Nazi party sought to expel—and exterminate—all things that didn’t fit into its conception of perfection. It imagined, like we did above, what a perfect human being would be like, and then attempted to implement this ideal in the world by way of force.

Hitler held two art exhibitions: “The Degenerate Art Exhibition,” in which he showed the more expressionist paintings of the Jewish people, and the “Great German Art” exhibition in which he displayed the more classical paintings done by Germans. These were two exhibitions used as a hateful campaign to legitimize the degeneracy of the Jewish people and expel them and their art from the pursuit of the ideal state.

Other extremes include the Dominican Friar Savonarola, who burned Renaissance works of art he deemed sinful, or the Protestant Reformation that sought to destroy large amounts of religious art it deemed blasphemous, or the Chinese Communist Party’s Cultural Revolution in which the Party destroyed the art and literature of 5,000 years of traditional Chinese culture.

Despite being across different times and cultures, all of these examples have one thing in common: Those who sought to expel artists and artworks believed they were right absolutely; they believed that their truths were the only truths and that everything else should be expelled, censured, and/or destroyed. We can see similarities in what we now call “cancel culture.”

It’s detrimental and extreme to force someone to live up to an imagined standard of perfection; the use of force also prevents us as human beings from having the freedom to make moral decisions. How can there be morality without freedom?

Of course, none of these examples lives up to the Platonic ideal of anointing those artists and artworks to be censored with myrrh and wreaths before sending them away, but these examples do show problems potentially built into Plato’s approach to censorship.

I think the problem lies in who we censor. The perfect human being we imagined earlier was in our heads, not anyone else’s. Maybe it’s not the state’s job to censor the artist, but the artist’s job to censor herself; maybe the artist must turn his gaze within. How else are we to deeply consider what it means to produce works of art centered around selflessness, honesty, compassion, and goodness?

What do you think about Plato’s ideals concerning censorship? How might we produce a culture centered around the ideals the divine creator has instilled within us while avoiding the pitfalls of history?