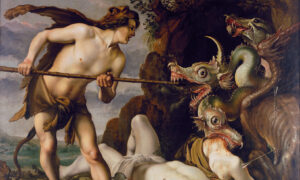 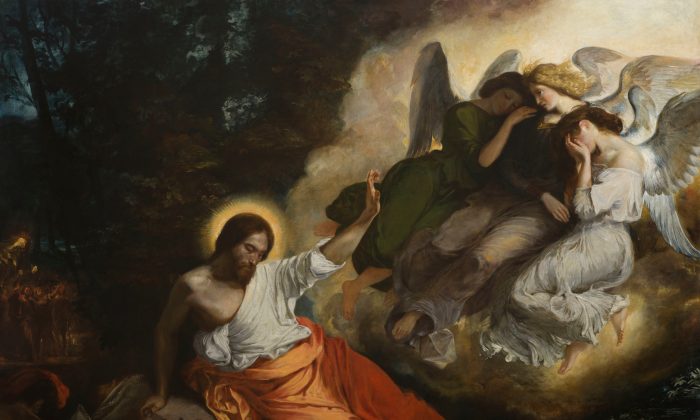 The Ever Elusive, Masterful Delacroix

NEW YORK—There’s a restless quality, a kind of centrifugal force, still stirring within the paintings by Eugène Delacroix (1798–1863). While celebrated as the 19th-century artist who epitomizes romanticism, his oeuvre continues to elude comprehension. For the first time in North America, we have an exceptional opportunity to learn more about Delacroix, beyond his emblematic painting for the French Republic “Liberty Leading the People,” reproduced in countless history books, and on the obsolete 100 franc banknote.

You may know of Delacroix as the darling of the Paris Salon, or of Delacroix as the painter of majestic murals, of religious commissions, and of wild animals. Less known is Delacroix the portraitist of friends, the satirical cartoonist, or the illustrator of plays. There’s also Delacroix the Orientalist, the womanizer, and the sulfurous rival of the other last old master, Jean-Auguste-Dominique Ingres (1780–1867). No matter how Delacroix may be described, we have the opportunity to reassess, in broader context, the works of an indisputably passionate artist who relentlessly created for passion’s sake.

The Metropolitan Museum of Art has mounted the most comprehensive exhibition possible of Delacroix on this side of the Atlantic. The retrospective, aptly titled “Delacroix,” follows its Paris debut this past summer. It was organized by the associate curator of The Met’s department of European paintings, Asher Miller, with the director of the Musée du Louvre’s department of paintings, Sébastien Allard, and its curator, Côme Fabre. In solid collaboration with the Louvre, practically every major work by the French artist that was not too massive, too precious, or simply impossible (his murals) to transport can be seen at The Met until Jan. 6, 2019.

“This is clearly a historic occasion,” the recently appointed director of The Met, Max Hollein, said before the opening. The nearly 150 works, including oil paintings, watercolors, prints, drawings, and journals, are spaciously displayed on sufficiently subtle chromatic walls and perfectly lit to enjoy each piece on its own terms. Four years in the making, the exhibition “Delacroix” is a magnificent curatorial tour de force, considering the large number of works Delacroix produced—more than 800 paintings, 8,000 drawings, 100 prints, and an even a greater number of written pages—and the incredible diversity of all of them.

Coincidentally, some 130 of his drawings are also on view at The Met in the exhibition “Devotion to Drawing: The Karen B. Cohen Collection of Eugène Delacroix” through Nov. 12, 2018, expanding the opportunity to experience Delacroix’s oeuvre.

Delacroix’s style, the subject matter he depicted, the size and genres of his works, and the techniques and mediums he used vary tremendously. He was also a writer—not just an artist who wrote about paintings, but considered, especially in France, a bona fide writer. Yet despite the thousands of pages of his journals and letters, revealing his most private thoughts and ideas, Delacroix remains elusive and inconsistent, like a passionate and untethered soul.

“It is very difficult to understand where he wants to go and sometimes what he wants to do, because he is searching and searching,” said Allard, who has been studying Delacroix for more than 20 years. Delacroix wrote about paintings in a way that did not necessarily match his own practices and choices as an artist himself, “so he was a very complicated person,” Allard said, before the opening of the exhibition at The Met.

Above all, Delacroix aspired to make a name for himself. At the age of 17, he wrote to a friend, “Pray to heaven that I may be a great man.” Unlike most of his contemporaries, Delacroix sought approval directly from the public by submitting large statement paintings to the Salon every year, before seeking official recognition through the Prix de Rome. He made his debut in the Salon with the dramatic literary image of Dante and Virgil crossing into hell, “The Barque of Dante” (1822). It was politically safe and effective. By focusing on a literary subject, he avoided any kind of controversy like what he had witnessed with Théodore Géricault’s (1791–1824) “The Raft of the Medusa” (1818–19), which highlighted an international scandal.

Stylistically, Delacroix emulated the terribiltà (the terror-inducing aspect) of Michelangelo, filtered through the energetic brushwork of Géricault and Rubens.

“Wishing to attract attention by impressing the public, Delacroix balanced the boldness of a dark subject, the dramatic intensity of gesture and color, and the horrifying aspect of the figures trying to board the boat through a display of “beaux morceaux” (beautifully rendered passages),” Sébastien Allard and Côme Fabre wrote about the painting in the exhibition catalog.

When the painting entered the collection of the Palais du Luxembourg, considered the antechamber to the Louvre, Delacroix knew that after his death, his paintings would be displayed alongside the likes of Raphael and Poussin. He wrote in his journal: “Fame is not an empty word for me. The sound of praise gives me real happiness.”

His paintings of the Greek War of Independence against the Ottoman Empire solidified his fame further. “Scenes from The Massacre of Chios” (1824) could not be transported from Paris. Yet a preliminary oil study for it, “Head of an Old Greek Woman”(1824), is included in the retrospective, and one of Delacroix’s preliminary drawings for it is on display in the “Devotion to Drawing” exhibition at The Met. His painting “Greece on the Ruins of Missolonghi” (1826), exhibited in an 1826 benefit supporting the Greeks, captured the public’s attention. Delacroix was able to transcend the specificity of the current event by revisiting the outmoded genre of the allegory.

As one reads in the exhibition catalog about other examples of Delacroix’s paintings exhibited in the Salon, it becomes evident how careful and strategic he was in choosing his subject matter, all the while remaining fiercely independent.

As we can see now, Delacroix’s prayer at the age of 17 is aligned with his legacy. More than 540,000 people saw his works in the Louvre, and The Met expects to receive as many, if not more, visitors to its slightly smaller version of the retrospective.

Delacroix’s ambition and relentless experimentation paved a way, perhaps reluctantly, for the modernists—from Manet to Gauguin—who revered him. Cézanne touted Delacroix as an exemplar of the avant-garde when he said, “You can find us all in Delacroix.”

Depending on our understanding of art history, “Delacroix is the last old master or the first modern painter,” Allard said. “He’s on the edge.”

It’s unlikely, however, that Delacroix would have been happy to be seen as the prototype of the modernists who revered him. Although the poet Charles Pierre Baudelaire, who coined the term “modernity,” adored Delacroix, in some accounts Delacroix avoided him.

And despite Delacroix’s use of lush color and his frequent, messy, swirling brushstrokes; and though he generally eschewed academic conventions, he did not see himself as others saw him: as the leader of the Romantic movement. Delacroix actually regarded himself as a classicist in line with the European tradition of art, as an heir of Raphael, Poussin, or Rubens, all of whom he copied.

In the words of Baudelaire, “Delacroix was passionately in love with passion, but coldly determined to express passion as clearly as possible.”

The Met’s exhibition organized Delacroix’s career in three phases: Delacroix’s thirst for fame and freedom (1822–1834), the production of his splendid murals and his embracing of tradition (1835–1855), and finally the years until his death in 1863. During this last phase, he became more enamored with painting landscapes from memory.

Among the highlights are Delacroix’s landmark works that span his career: In addition to his “Greece on the Ruins of Missolonghi” (1826), there is “The Battle of Nancy” (1831), “Women of Algiers in Their Apartment” (1834), “Medea About to Kill Her Children” (1838), and “The Lion Hunt” (1855). Most of these are, more or less, dark subjects depicted with rich colors, dynamic compositions, and unsettling brushstrokes. Delacroix is more inclined to evoke sensation and emotions than evoke any reverence for the divine.

In his restless search, Delacroix seems inclined toward darker subjects, showing such tendency already in early adulthood. After a day of seeing friends and working on his painting “The Massacre at Chios,” he wrote in his journal: “When I got home, I saw myself in the mirror and almost took fright at how disagreeable I look. … A fateful torch must shine into my soul … which, like candles for the dead, illuminates only the funeral rite of whatever may remain of the sublime in there.”

Along with this general tendency, which engendered his strong association with Romanticism, Delacroix is complex and full of surprises. He also created sublime and peaceful paintings, as well as finely finished works. The exhibition has some rarely seen masterpieces that can be appreciated on closer view. The monumental painting of the biblical subject “Christ in the Garden of Olives” (1824–26) was removed from its high perch on the wall of the Saint-Paul-Saint-Louis church in Paris and cleaned especially for the exhibition.

An essentially unknown, large still life painting showing Delacroix’s brilliant use of color, “A Basket of Flowers” (1848–49), was in storage for about 50 years, until about a year ago when Charlotte Hale in The Met’s department of paintings conservation cleaned it, removing old varnish, and brought it back to life for the exhibition.

“For the first time we see a painting as Delacroix’s contemporaries saw it, and as it was intended to be seen. This exhibition is as much about the Delacroix you think you know as it is about the artist you don’t know, and couldn’t have known,” Miller said.

On a smaller scale, there are some delightful gems that contrast his loosely painted large canvases, like an impeccably finished watercolor “A Greek and a Turk in an Interior” (late 1820s). It depicts the unlikely civil conversation between two gentlemen of the two ethnicities who were mortal enemies in Delacroix’s time. Of course, one can see Delacroix’s magnificent depiction of animals, especially of horses, such as the aquatint print “Turk Mounting His Horse” (1824), and the horses in his war paintings.

The exhibition also shows some beautifully abbreviated landscapes and seascapes that Delacroix created from memory toward the end of his career, like “The Sea at Dieppe” (circa 1852).

In the penultimate gallery of the exhibition, his lighthearted landscapes are juxtaposed with a chiaroscuro painting of the gruesome subject, though peacefully depicted, of “The Shipwreck of Don Juan” (1840), based on a poem by Lord Byron. At first glance, it seems the people in the boat have resigned themselves to dying, but the episode Delacroix depicted is of castaways drawing lots to determine the order in which they will cannibalize each other. It seems to hold an eerie prescience about the fate of some art created in future centuries—tending toward the darker side of life, and with each art movement (each “-ism”) supplanting the next.

Delacroix remains a liminal figure. As both a masterful painter and eloquent writer, he understood the power of both means of expression. Unknowingly, he also paved the way for the importance of words in the art world today. On Oct. 8, 1822, he wrote in his journal:

“When I have done a fine painting, I have not expressed any thoughts. That’s what they say. How simple-minded they are! … A writer says almost everything in order to be understood; painting builds a kind of mysterious bridge between the soul of the characters and that of the spectator.”

Yet Delacroix regarded himself as a classicist, and ironically he inspired so many modernists who would have to use words to bolster the legitimacy of their visual creations. In many ways, Delacroix is a bridge. It’s the choice of the viewer of his works to decide in which direction he can be best appreciated.

“The great artist roams his domain, and there he offers you a feast to his own taste,” Delacroix wrote on the last page of his journal.