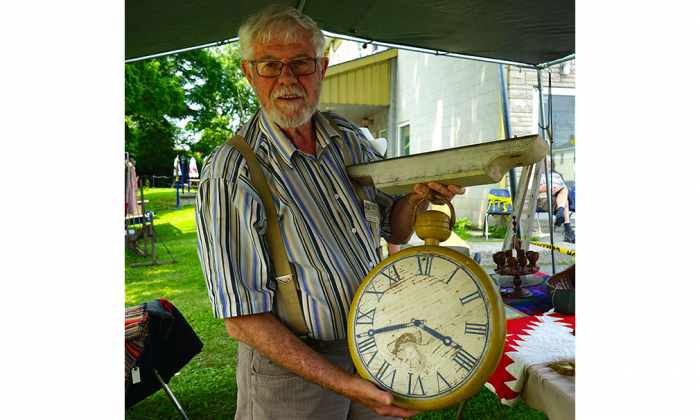 Collector, dealer, and antique show promoter Bill Dobson at his booth at the Perth Antique Show and Sale on July 4, 2015 in Perth, Ont. He is holding a wooden sign shaped like a watch that would have been hung outside a shop to indicate watch or clock repairs. (Pam McLennan/Epoch Times)
Art Marketplace

The Enduring Appeal of Antiques and Collectibles

Antiques by their very nature possess a stately beauty and a sense of history. They are decorative, exude character and charm, and increase in value with the passage of time.

Along with antiques there are vintage, collectible, and reproduction items. So what differentiates an antique from the rest?

Dobson, who is mayor of Montague Township near Smiths Falls, Ont., where he lives in a 170-year-old house, became interested in antiques in 1967 when Canadians celebrated 100 years of confederation.

“Shortly after that I started buying and selling. Over the years I’ve been both a dealer and a collector,” he said.

He also promotes and manages several antiques shows in Ontario, including the Perth Antique Show and Sale, where he was one of about 30 vendors at this year’s show on July 4 and 5. For 18 years he and his wife Linda published “The Upper Canadian,” a national antiques magazine.

To identify an item as antique requires looking it over carefully and getting its history. Antiques were built to last and were not mass-produced. Antique furniture can be made from a mixture of woods, and the veneers are usually thicker than the ones used in newer pieces. They are mostly handmade and thus show some irregularity, such as the design carving not being perfectly symmetrical.

I think the antique business is going to become more and more popular over the next couple of years because of all the festivities in 2017.
— Antique dealer Bill Dobson

Dealers can usually tell you who owned a particular piece and where it was made, which adds to the charm of owning a little piece of history. The dents and scratches in antique furniture are said to add personality. Antique pieces may also have layers of paint that when removed will reveal the beautiful original wood.

Some people like to collect usable items such as old doorknobs or other hardware, buttons and linens, as well as glassware, china, kitchen implements, and older publications such as magazines.

Antiques are used to decorate homes, restaurants, and offices so there is an endless market despite that the demand for them seems to be cyclical.

Dobson said there was a noticeable resurgence in antique buying and selling in 1967 “when the media told us that we should be proud of our material heritage and we should start preserving it and collecting it, and so that’s why so many of us started to deal.”

“I think the antique business is going to become more and more popular over the next couple of years because of all the festivities in 2017 [when Canada turns 150]. I think it’s going to have the same impact as 1967 did,” he said.

The best places to find antiques are at antiques stores, flea markets, antiques shows, estate sales and auctions, and even yard sales. The Perth Antique Show and Sale had a wide variety of items such as artworks, china, glass, silver, textiles, tools, furniture, folk art, and decorative accessories, along with retro and nostalgic collectibles.

Dobson said there’s no shortage of good-quality antiques out there; it’s just that the way dealers acquire them has changed.

“Generally, the good antiques are still available, the only difference is, when I started say 40 years ago, we would have been buying and selling from the original sources, from the farm houses and farm auctions, and so on, and nowadays you buy from collections,” explained Dobson.