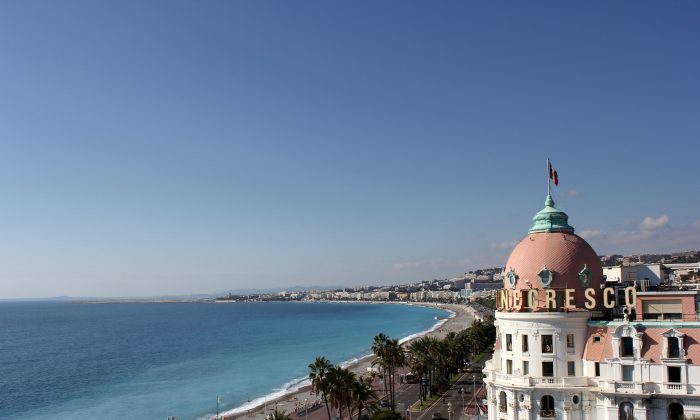 The celebrated dome of the Negresco Hotel in Nice, overlooking the Promenade des Anglais and the Mediterranean Sea. (Courtesy of Negresco Hotel)
Destinations

The Enduring Allure of the French Riviera

The French Riviera region of southern France conjures up images of deep blue seas, winding cliffside roads, and luxurious living. Celebrities and some of the world’s wealthiest people have gravitated to its pleasant climate and breathtaking vistas for the past few centuries. Artists have also been drawn by the area’s vivid colours, where the lush landscape and mountainous regions provide a sun-washed canvass of inspiration.

However, the French Riviera, also known as Côte d’Azur (Blue Coast), is not just for the fabulously rich or the artistically inclined. It’s a popular destination for the average visitor as well, with relatively affordable apartments and hotels—often within walking distance from the beach and the local highlights.

My family and I love the Riviera and we have visited it several times. On the first trip we stayed in a bed and breakfast in the town of Vence, in a lovely mountain region. The second time we rented an apartment in Nice, and the third time we were based in Cannes. Each time we took day trips to other cities in the region. And yes, we’re planning to go back again!

Nice: The Heart of the Riviera

One of the highlights of our trips was Nice, the largest city of the French Riviera. A vibrant seaside area, it offers a palate of choice for the visitor—beautiful buildings, a variety of museums, narrow streets, gourmet restaurants, elegant gardens, and a plethora of shopping opportunities. We were delighted to discover a legacy of history and traditions from the city’s various residents like the Italians and the French, as well as the wealthy foreign visitors who constructed some of its most luxurious buildings and avenues.

A prominent part of this legacy is the elegant Promenade des Anglais (Walkway of the English). Commissioned in the 19th century by those British who made Nice their home for the winter, the walkway runs along the coastline of the Mediterranean known as the Baie des Anges (Bay of Angels).

Visitors stroll, bike, or rollerblade along the promenade, enjoying the sea and pebbled beaches on one side and the many luxury hotels and restaurants on the other. Overlooking the promenade is Castle Hill, an old fortress offering magnificent views of the city. It boasts a park, medieval ruins, and an imposing waterfall.

Another attraction on the Promenade des Anglais is the sumptuously designed Hotel Negresco, a hotel/museum that opened its doors in 1913. It was built by Romanian-born hotelier Henri Negresco, who wanted the palatial hotel to be a star attraction for elite international clientele.

The hotel has since become home to an impressive 6,000-piece art collection gathered by Madame Jeanne Augier, the Negresco’s owner since 1957. It hosts many events and has two elegant restaurants—La Rotonde and Chantecler—as well as a bar and terrace. It is truly a gem for lovers of great art, architecture, and elegance.

We also visited Monaco, another famous city on the French Riviera. A hub of luxury since the 19th century, the city came into the world’s spotlight when Hollywood star Grace Kelly married Prince Rainier, making for a fairy tale story and a newfound American connection to Monaco. Today, their son Prince Albert rules over the city-state which, although located on the French Riviera, remains independent from France.

Monaco is best known for its super wealthy residents, its annual Monaco Grand Prix—one of the most challenging Formula One tracks in the world—and its famous Monte Carlo Casino, which was featured in several James Bond films. Automobile aficionados can also visit the Prince’s private car museum, which houses an extraordinary collection of cars that belonged to Prince Rainier.

Set on several cliffs with lush gardens and parks, Monaco provides stunning views of the harbour and its many yachts, opulent villas, and impressive buildings, such as the elegant 19th-century opera and casino buildings. The royal palace is open to visitors from April 2 to Oct. 15, and the trek there is an attraction in itself. On our way to the palace we explored the surrounding winding streets with their boutique shops, restaurants, and affordable street food, all the while enjoying breathtaking panoramic views of the city.

Cannes is another luxurious city on the French Riviera, famous for its prestigious annual film festival. In addition to its rich cinematic connections, Cannes is also home to sumptuous villas, restaurants, and hotels. We encountered Cannes’s rich history in Le Suquet district, known for its narrow streets and medieval fortress, which affords fantastic views of the city. We also strolled along La Croisette, an elegant waterfront avenue bordered by designer stores and renowned hotels.

Another must-see for us was the town of Grasse, the perfume capital of France, which holds the secrets to the country’s greatest perfumes, including Chanel’s famous no. 5. It also hosts many local perfumeries, where traditions have been inherited for hundreds of years.

The medieval village of Eze is also a jewel of the region. Perched on a cliff within fortifications, it has old cobblestone streets and breathtaking vistas, particularly from its exotic cactus garden, as well as lots of boutiques, restaurants, and 5-star hotels build within medieval castle walls. It is another popular tourist destination for those looking to enjoy a mix of history, nature, wealth, and shopping. It was certainly one of our favourite stops.