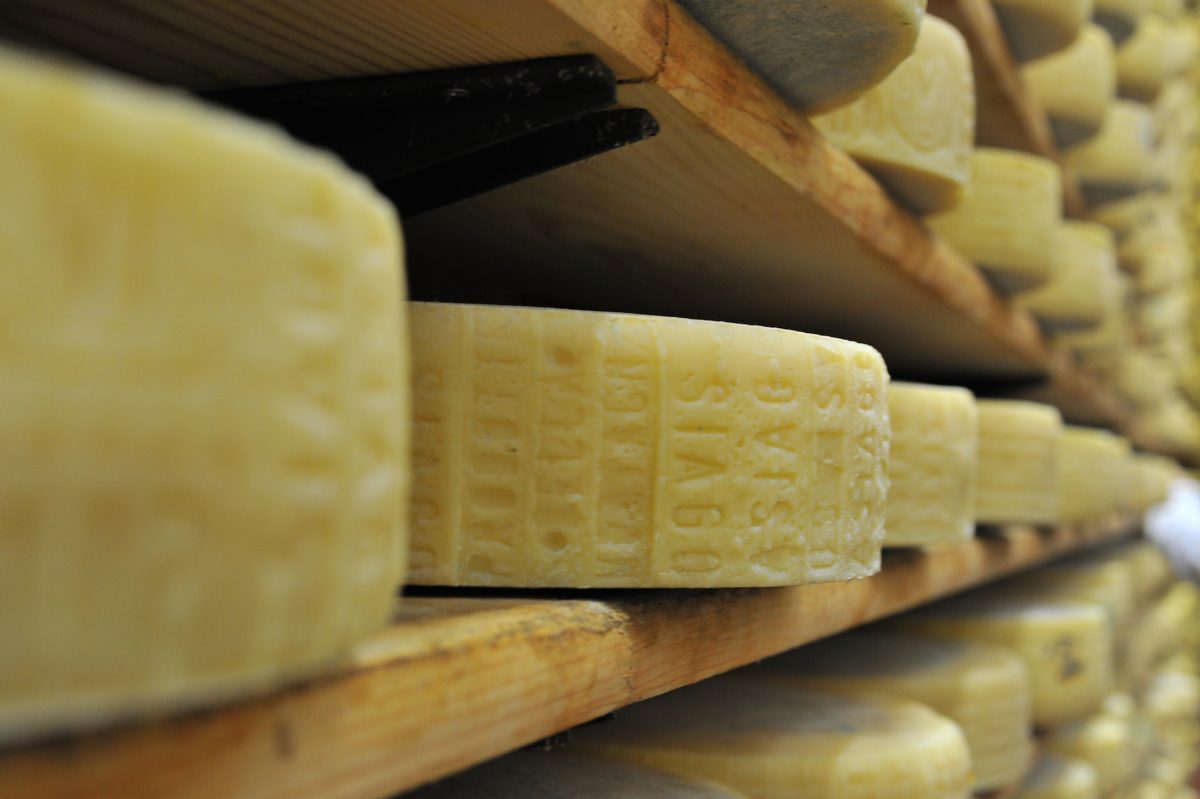 The Enchantment of Italian Asiago

CALTRANO, Italy—It’s a gorgeous late summer morning and I’m gazing at the seemingly endless, verdant Alpine pastures of Italy’s Asiago plateau from Malga Serona, a rustic cheesemaking chalet situated at an altitude of 4,160 feet above sea level. The gentle tinkling of bells from free-roaming cows happily feasting on abundant grasses, herbs, and wildflowers is the only sound. This is how I begin my first full day of a trip dedicated to learning more about the region’s namesake cheese, and the vantage point is a breathtaking introduction to what makes this formaggio so unique—and why it’s a source of great pride among locals.

The lush landscape of the Altopiano di Asiago, as the area encompassing the town of Asiago and seven other municipalities in northeastern Italy’s Veneto mountains is called in Italian, continues to dazzle me over the course of my week-long stay. The same is true of the region’s incredible history and its fabled gastronomic contribution.

I discover that Asiago is one of Italy’s most ancient cheeses. Archaeologists have documented evidence of cheesemaking activity in the Altopiano di Asiago, which is the largest Alpine plateau in Italy, as early as 1200 B.C., according to Fiorenzo Rigoni, president of the Consortium for the Protection of Asiago Cheese. The cheese that evolved into today’s Asiago Stagionato, or aged Asiago, has been made in the plateau for over 1,000 years.

In 1996, Asiago was awarded Protected Designation of Origin (PDO) status, which stipulates that the collection of cow’s milk and the entire cheesemaking process take place exclusively in the provinces of Vicenza, Trento, and parts of Padua and Treviso, following specific production criteria. This designation is not only a guarantee of quality, but also an assurance that the pristine natural environment in which Asiago was developed continues to be reflected in the flavor of the cheese.

Interestingly, there are two types of Asiago, made in very different ways, under the PDO designation: the aforementioned Asiago Stagionato, sometimes called Asiago d’Allevo; and Asiago Fresco (fresh), also referred to as Asiago Pressato.

Fresh Asiago PDO is made from whole cow’s milk; the curds are dry-salted and then pressed in molds to eliminate excess whey. It is aged a minimum of 20 days, and never more than two months. The texture is soft and spongy, with striking irregular-shaped holes throughout the creamy paste. Its sweet and buttery flavor makes fresh Asiago an especially versatile cheese that can be enjoyed on its own, paired with honey and jams, melted over pasta or polenta, and even grilled.

Asiago Stagionato PDO, made from partially skimmed cow’s milk, is capable of being aged for a much longer time period than fresh Asiago. The ancient cheese enabled shepherds to preserve the milk they collected in summer months and served as nourishment during the harsh winters. Today, there are three different varieties, determined by the length of aging: Mezzano (4 to 6 months), Vecchio (10 to 15 months), and Stravecchio (at least 15 months).

The texture is firm and compact, hardening with age; the flavor also becomes more pronounced as the wheels mature, ranging from yeasty and delicate, to nutty and slightly pungent, to spicy and intense, sometimes tingling on your tongue. It’s ideal as a table cheese with cured meats and salumi, as well as for grating on pasta, soup, or risotto.

An additional distinction, Prodotto della Montagna (Mountain Product), is given to Asiago that is made and aged at altitudes above 600 meters (about 1,970 feet). Of the 18 producers making Asiago PDO in these areas, 12 are malghe, which refers to the traditional Alpine huts or structures that were shelters, and often dairies, for shepherds during the summer months.

The original malghe were constructed in wood; all were destroyed during World War I, either by bombs or by soldiers who burned them. The Asiago plateau, located on the Italian side of what was the border between Italy and the Austro-Hungarian Empire, was a continuous battleground for 41 months during the Great War. The town itself was completely decimated by bombings, save for a statue of the saint Maria Giovanna Bonomo erected in front of the house where she was born. The fact that the statue remained intact is considered a miracle by many.

The town of Asiago was rebuilt after the war, and roughly 100 of the malghe were reconstructed with stone and brick in the mountains. Rigoni, who is also the Director of Caseificio Pennar, a dairy cooperative that produces Asiago PDO Prodotto della Montagna, pointed out that the precise location of each malga plays an important role in the flavor of the cheese made there, because the quality of the milk is tied to the unique varieties of herbs and flowers that constitute the animals’ diets.

“I remember visiting different malghe with my father and grandfather when I was a child. As we approached, they could already describe how the cheese made that day would taste, based on where the cows were grazing, what grasses they were eating, and the position of the sun,” Rigoni said.

I had the opportunity to hike through the pastures alongside the cows at several malghe during my stay in Asiago. My extraordinarily knowledgeable guide, Massimiliano Gnesotto, showed me the amazing array of flowers and herbs that the animals graze upon, and seeing this terroir first-hand gave me a new appreciation for summer mountain milk.

The cheesemakers bring their herds up to the malghe in late May or early June, and live there until late September, before the colder weather begins. Gnesotto said the rich, natural diet and intense physical activity make for happier, healthier animals—cows that spend part of the year in the malga surroundings typically live twice as long as those that don’t.

It’s worth mentioning that the impact of World War I is still visible here; Gnesotto pointed out trenches that were used by soldiers, as well as shrapnel from bombs present among the grasses, as we made our way through the plateau.

At Malga Serona, in the small town of Caltrano, 28-year-old Davide Nicoli has been making Asiago Stagionato PDO, along with several other typical local cheeses such as tosella, a fresh cheese that is often fried in butter (which is as delicious as it sounds), for the past seven years. I asked him what it’s like to spend four months of the year in this rather remote mountain location, and he answered, laughing, “Complicato!” But he wouldn’t have it any other way.

While the days are long—filled not just with cheesemaking and tending to the animals, but also running a casual restaurant and selling the products to visitors—he said the work and the lifestyle are the perfect marriage of his passions for the mountains and the cheese. He added, “It’s absolutely important from a historical perspective. We are ambassadors of this territory who are sharing the story of our land.”

Nicoli is one of several inspiring young Italians I met who have chosen this path. At Malga Verde, located in the plateau’s Lastaro Valley at an altitude of 3,458 feet, the siblings of the Cortese family—Michele, 28, Davide, 30, and Milady, 33—are responsible for the cheesemaking, agriturismo, and sales of their products.

Milady left her office job in 2010 to join her brothers at the malga; she said she was tired of sitting behind a desk for eight hours a day, and loves being in contact with nature and the people who visit Malga Verde.

“I think it’s important to continue the malga traditions to protect the land around us, and to preserve the gastronomic traditions for which we are known throughout the world,” she said.

Asiago produced in the mountains is held in especially high regard by locals. “Sometimes people buy a whole wheel of Asiago Stagionato that was made in a malga on the day their child was born, and save it for years, to eat on the day of the child’s first communion. You can only do that with high-quality cheese,” said Gnesotto.

At Caseificio Pennar, located at an altitude of 3,510 feet, Rigoni showed me a nine-year-old wheel that was made on Sept. 21, which marks the annual celebration of the patron saint of Asiago, San Matteo. “On that day, a grand festa has taken place in Asiago for centuries. It’s a special day for Asiago, and for the casari (cheesemakers) also a bit shrouded in mysticism,” he explained. Each year, several prized wheels made that day are selected for extended aging. The nine-year-old Asiago sold for 270 euros per kilo in 2018, and this year, the price will rise to 300 euros per kilo.

Sept. 21 is also the day that many of the cows are proudly paraded through the streets of Asiago, as they descend from the mountains to lowland pastures for the winter, following the ancient tradition of transhumance. I was lucky enough to witness this exhilarating spectacle of close to 500 cows, bells clanging, prancing through the center of the town on my final day in Asiago. It was a moving ending to a trip that left me wondering why I never visited this magnificent region of Italy sooner, and eager to plan my return.

Where to Buy Asiago PDO

Both Asiago Fresco PDO and Asiago Stagionato PDO can be purchased at a number of retailers and specialty shops in the United States, including many Whole Foods stores, DiPalo’s Fine Foods in New York City, DiBruno Bros., and Murray’s Cheese. To ensure you are buying authentic Asiago from Italy, look for the word “Asiago” imprinted on the rind.

Asiago PDO is part of an EU-funded program called “Uncommon Flavors of Europe” that is dedicated to promoting authentic Italian Asiago, along with Speck Alto Adige PGI and Pecorino Romano PDO. The author was a guest of the program on an educational study tour.

Kristine Jannuzzi is a bilingual (English/Italian) freelance writer, editor, and social media consultant. Currently based in New York City, she is a frequent contributor to Culture: The Word on Cheese; her work also has been published in Italy Magazine, British Heritage Travel, Listen, and NYU Alumni Magazine, and on the websites Italia Living and Snooth, among others.