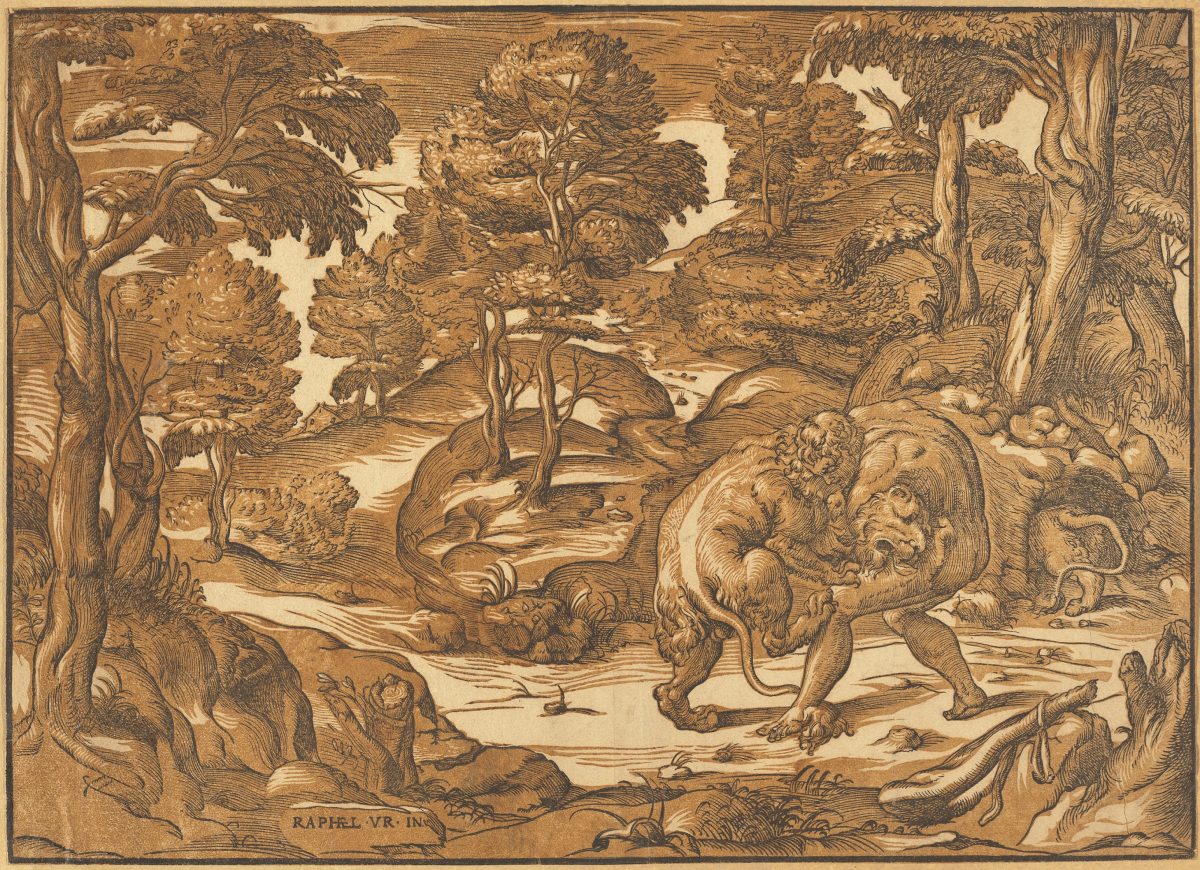 The Elusive Woodcut of Renaissance Italy: The Chiaroscuro

Two “noble, imposing” apostles by Domenico Beccafumi first introduced Naoko Takahatake, the curator of prints and drawings at the Los Angeles County Museum of Art (LACMA), to the rare art of Italian chiaroscuro, a type of early color printmaking. At the time, she could not have guessed that it would take her the next decade to research the genre.

Takahatake had seen Beccafumi’s apostles as a graduate curatorial intern, assisting the curator of old master prints, Peter Parshall, with his 2007 exhibition “The Baroque Woodcut” at the National Gallery of Art in Washington (NGA). She was struck by the “bold draftsmanship, sumptuous color, and dramatic chiaroscuro [light and shade]” in Beccafumi’s apostles, she wrote in an email. And she “was immediately captivated by the beauty and technical virtuosity of these complex prints, and fascinated by the great many variations that could exist among impressions of a single chiaroscuro.”

Chiaroscuro, Italian for light (“chiaro”) and shade (“scuro”), is more commonly referenced as a technique in painting whereby tonal contrasts are used to portray three dimensions, or to create a specific ambience. Leonardo da Vinci’s illuminating “Adoration of the Magi,” the dramatic paintings of Caravaggio, and the emotive paintings of Rembrandt all use chiaroscuro to some degree.

The chiaroscuro woodcut re-creates the light and shade seen in Renaissance drawings and paintings by applying a series of woodblocks, each varying in tone, to make a print.

First invented in Germany by Hans Burgkmair in 1508, chiaroscuro came to Italy in 1516, when Ugo approached the Venetian Senate to protect his new printing method “chiaro et scuro” from being copied. Italian chiaroscuro was mainly practiced in the 16th century.

Italian chiaroscuros often reflect scenes from myths, classical literature, biblical narratives, allegories, or personifications—subjects that all appealed to the wealthy patrons and print collectors who could afford these luxury prints.

It’s important to note that the chiaroscuros were not merely seen as reproductions. “A chiaroscuro print with Raphael’s name in the block … told the purchaser the one essential fact of importance: that the ‘idea’—the ‘disegno’ being conveyed—was Raphael’s, and whether or not this idea had other manifestations, the print was at that moment the expression of that idea. Ugo was not making reproductions of drawings, he was making works of art,” wrote Peter Parshall in his essay “The Origins of the Chiaroscuro Woodcut.”

Takahatake’s awe of the art of chiaroscuro quickly turned to curiosity. Chiaroscuro had been held in such high esteem from the Renaissance on, with designs by such well-known artists and draftsmen as Titian, Raphael, and Parmigianino that it led her to ponder why so few chiaroscuros were produced. She wondered how the artists and printmakers learned to make chiaroscuros, what techniques and materials they used, and why they worked in such a laborious and experimental medium.

She found no immediate answers and no complete history of chiaroscuro. And so Takahatake took a decade-long quest to find out more.

Italian chiaroscuro woodcuts have remained a mystery for so long largely due to confusion around their attributions and chronology, Takahatake said. “The prints generally lack signatures and dates; the printmakers’ biographical details are often obscure; only a small number of early written records have been traced; and very few contemporaries published writings on the technique and its practitioners,” she explained.

The chiaroscuro woodblocks, the carved pieces of wood used to make a print impression, were themselves seen as valuable commodities and were often traded, which again blurred the picture in terms of attribution and dating. Therefore, woodblocks by one artist or printmaker might, for example, be used for decades by another workshop.

The key to Takahatake’s quest, it seems, was collaboration. It is also the reason the research took a decade to conclude. Experts in art history, conservation, and material science all contributed to uncover more about the elusive Italian chiaroscuro.

The search took Takahatake to some 40 collections in North America and Europe, where she worked closely with curators and conservators to compare, contrast, and evaluate as many examples of chiaroscuro impressions as possible. The expertise her peers imparted proved invaluable, and working closely with them and with the exquisite prints in their care provided some of the most memorable moments of her research.

Most importantly, Takahatake worked with Library of Congress conservator Linda Stiber Morenus. The pair used the chiaroscuro prints themselves as primary evidence to trace them back to the workshops that made them. A unique profile was built up for each workshop by the analysis and interpretation of the inks, papers, and printing practices of some 2,000 chiaroscuro impressions. This immense undertaking was supported by conservators and scientists from LACMA who analyzed the chiaroscuro ink.

Part of Stiber Morenus’s research was to re-create the chiaroscuro as it would have been made at the time of the Renaissance, an endeavor that added more information to the Renaissance workshops’ modus operandi. First, with the help of printmakers and art historians, Stiber Morenus replicated “Saints Peter and John” by Giuseppe Niccolò Vicentino (after Parmigianino), a chiaroscuro created from three woodblocks. She was then able to observe the print process in different conditions, for example, using moist or dry paper. A change in each variable would allow her to gain insights into each workshop’s “signature” and allow her to identify unattributed chiaroscuros. A chiaroscuro impression could go through as many as five rounds of printing, depending on the number of woodcuts involved. At each stage, a deviation from the original design they were trying to copy could occur.

All information gleaned from re-creating chiaroscuros has added valuable insights into the genre, complementing the traditional art historical research of observing the prints in terms of style and mode of woodcutting, noted Stiber Morenus. This meticulous approach provided the information needed to establish timelines and associations between the artists and printmakers. It also clarified how the chiaroscuros were made and, for the first time, how certain effects were achieved.

The Adventure Ends With ‘The Chiaroscuro Woodcut in Renaissance Italy’ Exhibition

Takahatake has literally come full circle from when she first saw those two apostles. At Washington’s NGA, she is the one who now exhibits Beccafumi’s apostles. But this time, they may be seen in a different light: the light of an in-depth, comprehensive examination of the Italian chiaroscuro. And they are among 100 chiaroscuro prints from American and British collections that Takahatake curated for the LACMA in association with the NGA, called ”The Chiaroscuro Woodcut in Renaissance Italy.” The exhibition, which began in Los Angeles, has now moved to Washington, where it’s under the care of curator Jonathan Bober and runs through Jan. 20.

To read more on the exquisite Italian chiaroscuro, see Takahatake’s 288-page exhibition catalog ”The Chiaroscuro Woodcut in Renaissance Italy.” The book charts the creative process of chiaroscuro in Italy from its inception through its various innovations, to its eventual extinction. It details in great depth the materials used, the techniques employed, and the artists and workshops involved.

The comprehensive catalog contains contributions from Peter Parshall and Linda Stiber Morenus; along with Jonathan Bober, who is NGA’s Andrew Mellon senior curator of prints and drawings; Jamie Gabbarelli, the assistant curator of prints, drawings, and photographs at the Rhode Island School of Design’s Museum of Art; and Antony Griffiths, the former keeper of the department of prints and drawings at the British Museum.

“The Chiaroscuro Woodcut in Renaissance Italy,” is at the National Gallery in Washington through Jan. 20.